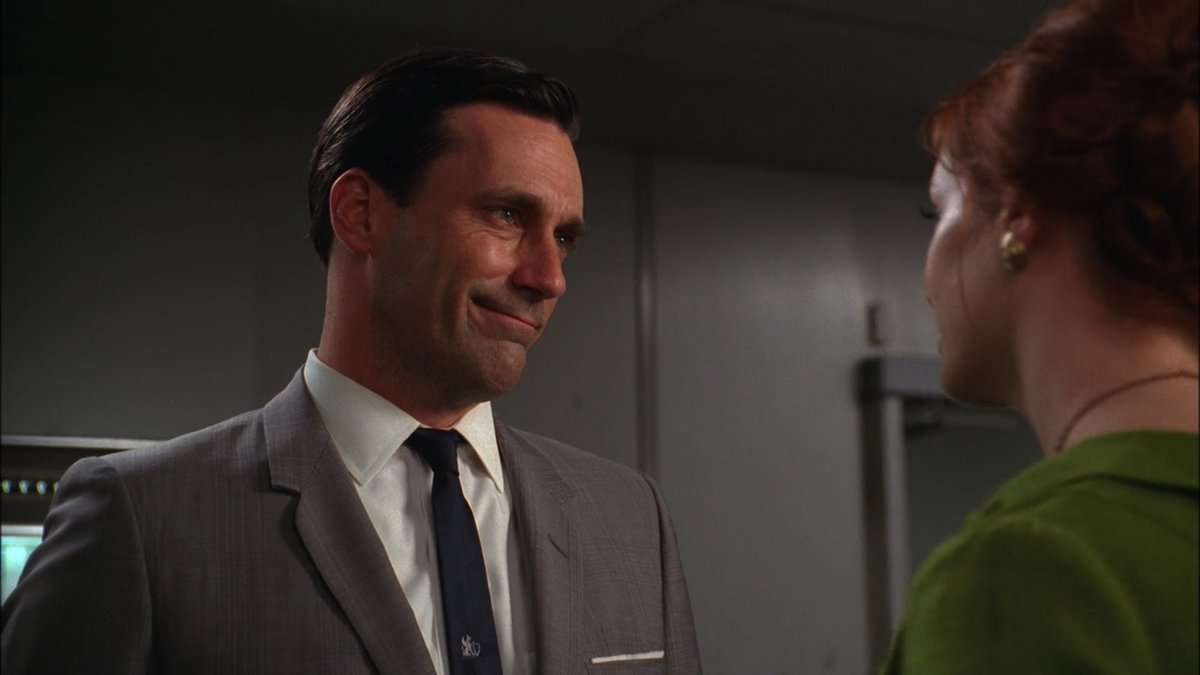 Even though Mad Men is a television series that rarely relies on plot, it has the uncanny ability to pick up disparate storylines in earnest, thus making for a sudden and surprising increase in narrative momentum. That’s exactly why “Guy Walks into an Advertising Agency” is the most memorable Mad Men episode yet.

The series’ best qualities are on full display throughout the hour: thematic cohesion, humorous ensemble interaction and a centralized setting at Sterling Cooper. On top of that, “Guy Walks into an Advertising Agency” also includes a shockingly gruesome plot twist, which is something we never thought possible from such a stately TV show.

The action starts to build when executives from Putnam, Powell & Lowe (Sterling Cooper’s London-based parent company) make a surprise visit to the office. Their “random” check-in coincides with Joan Harris’ last day at the office.

However, it soon becomes apparent that the inspection is really a restructuring: Lane Pryce will be relocated to India, Roger Sterling will be phased out and a young, British prodigy named Guy MacKendrick will take over as the new face of Sterling Cooper. The disappointment is palpable.

As I’ve said before, Mad Men is at its best when big business is the primary focus. Employee hierarchy might not seem like the most riveting storyline, yet our absorption and attentiveness in this sudden shake-up is exactly what makes the series so unique.

Mad Men has made a point to emphasize its characters’ fundamental inability and resistance toward change. Nevertheless, change is what subtly drives the series forward.

Having said that, the more things change, the more they stay the same — an unlikely deus ex machina comes in the form of a drunken secretary driving a John Deere lawnmower over Guy MacKendrick’s foot.

The severed foot incident remains Mad Men’s single most shocking scene, but it’s also one of the funniest. For a plot twist so uncharacteristic of the series, all you can do is laugh. But perhaps the funniest aspect of the ordeal is how quickly it restores the Sterling Cooper status quo: Guy’s career as a prodigious account man is essentially over now that “he’ll never golf again,” much to the relief of Roger and Lane.

On the other hand, Joan is the only character disappointed by the lack of change. Her husband doesn’t receive the promotion he’d anticipated, which means she won’t be able to leave her job after all. At the end of the day, we feel more sympathy for Joan than the man who literally got his foot chopped off.

Even though “Guy Walks into an Advertising Agency” is mostly remembered for its gory shock value, the episode’s greatness lies in its ability to transcend such cheap thrills. The final scene is a tender moment that finally finds Don in awe of his newborn child: “We don’t know who he is yet, or who he’s going to be. And that is a wonderful thing.”

For an episode that revels in the cruel twists of fate, the hour concludes with a poignant reminder that a clean slate in life should never be taken for granted.