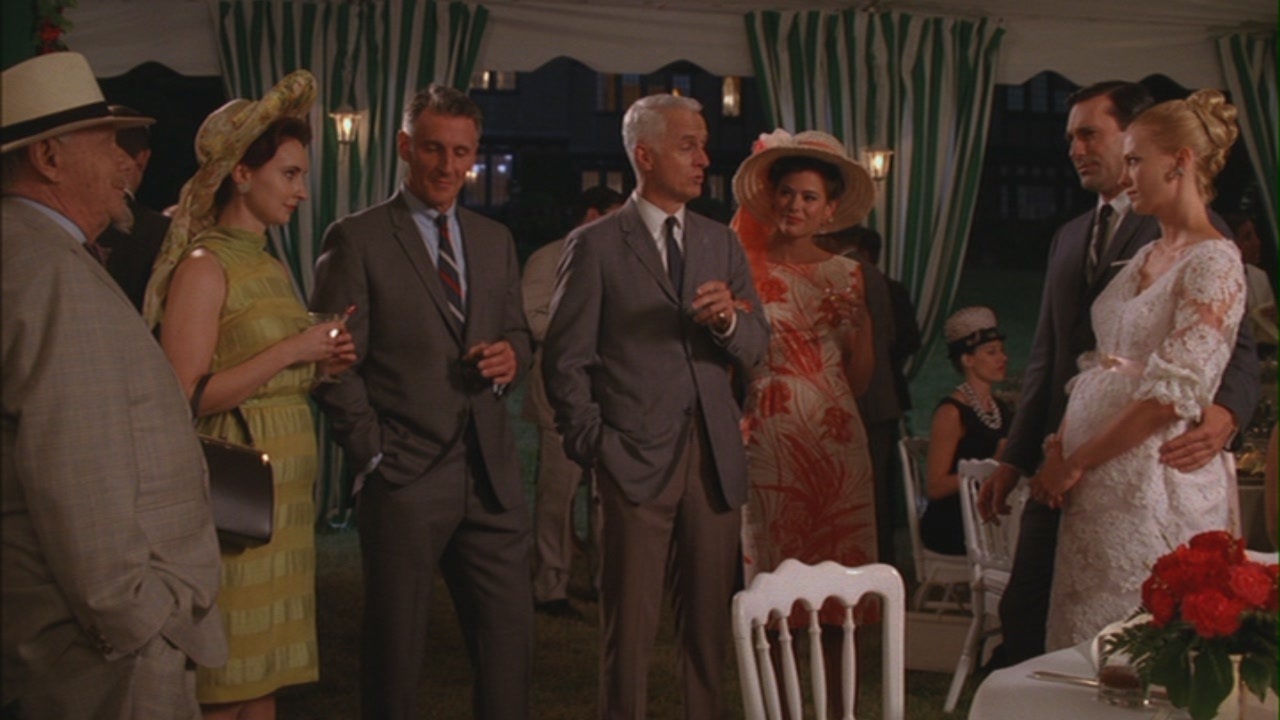 “The Sun Shines Bright on My Old Kentucky Home”

What do all the Mad Men characters have in common? They happen to work at Sterling Cooper. That’s it. The only shared connection between Donald Draper, Roger Sterling, Peggy Olson, Pete Campbell, Harry Crane, etc. is the fact that they share the same office space.

When they’re all invited to Roger and Jane Sterling’s wedding party (sans Peggy, of course), the setting is hostile rather than intimate. And although Roger is a charming (albeit blatantly racist) host, the gathering merely serves as an exhibition for all of Mad Men’s worst tendencies.

Some things are to be expected, such as Don going through an existential crisis, and Harry Crane being an unredeemable asshole. However, Pete’s dancing abilities and Roger’s bigotry remain shocking no matter the context.

To me, “My Old Kentucky Home” seems to be a collection of “moments” rather than the fluent Mad Men pastiche we’re used to. Roger donning blackface, Joan Harris playing accordion and Peggy smoking marijuana are the episode’s most memorable scenes, yet they seem to exist outside the larger whole.

For example, at his Kentucky Derby-themed wedding celebration, Roger performs a minstrel show for his bride-to-be, serenading her to the tune that gives the episode its title. The routine serves as a reminder of the deeply-rooted prejudices in our country, but it does little to expand Roger’s character beyond what we already knew — he’s always been an asshole.

Likewise, Peggy smoking marijuana with Paul Kinsey and his pretentious drug dealer is a storyline that tries too hard to be funny. Or rather, it doesn’t try hard enough. Whatever the reason, it feels clichéd and commonplace. Although Peggy gains independence and inspiration from the experience, she also gains an exasperating sense of over-ambition.

Joan Harris happens to be the only character in the entire episode who earns our sympathy. She hosts a dinner for her husband’s boss, and is reluctantly forced to play the role of dumb housewife. When Greg asks her play the accordion to entertain their guests, it’s the first time we realize how intelligent and talented Joan really is … and how she’s wasting those gifts on a husband who doesn’t deserve her at all.

“My Old Kentucky Home” only goes to show that Mad Men is at its best when its characters aren’t all gathered in one setting. The Sterling wedding party should’ve been a legendary bacchanal; instead, it’s another depressing day at the office.

Still, the memorable “moments” that make up the episode do a good job highlighting the individuality of the characters. Pete and Trudy Campbell’s jitterbug routine is a showstopper in the grand tradition of Fred Astaire and Ginger Rogers, while Don’s step-by-step lesson on how to make a Manhattan is a necessary reminder that he’s still the most interesting man in the world.

And the picturesque ending, which shows Don passionately kissing Betty under the moonlight, ties the episode together in a way that makes you forget about the disjointedness that came before.

It’s an uncharacteristic hour for Mad Men, but it’s still a sight to behold.