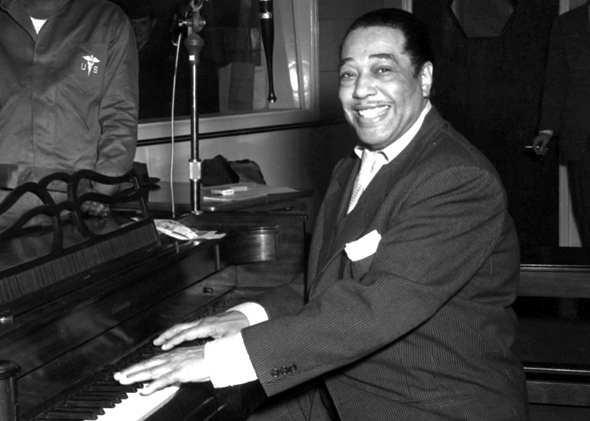 In 1952, Sam Snead won the 16th Masters Tournament, Alfred Hitchcock directed Strangers on a Train and Duke Ellington made the best album of the year.

Ellington had long been established as one of the greatest musicians in American history ever since his 1927 engagement at the Cotton Club. Like many of his jazz contemporaries, his artistic prime occurred in an era when singles were the preferred method of public consumption. Nevertheless, the Duke was one of the first musicians to experiment with long-form players and extended compositions (notably Black, Brown & Beige in 1946, the Liberian Suite in 1948 and the previous year’s Masterpieces by Ellington). His 1952 LP, Ellington Uptown, remains one of his greatest overall achievements and is easily the best album of the year.

In fact, it doesn’t even matter if “Take the ‘A’ Train” is played by the Duke himself or Oscar Peterson: if it’s an Ellington song, it’s always going to rank pretty high.

On a related note, pianists had a pretty damn good year in 1952. Along with the aforementioned Ellington and Peterson, the Top 5 also includes albums by Thelonious Monk and Bud Powell. Will we ever see another Top 10 list with this much jazz (80% if you count Billie Holiday)? Probably not, to be honest. But even though the country and proto-rock-&-roll stylings of Hank Williams and Johnnie Ray are vastly outnumbered, they actually paint the truer picture of where American music was heading.

Miles Davis’ second LP finds him once again toeing the lines between cool jazz, bebop and “hard” bop. His renditions of “Dear Old Stockholm” and “How Deep Is the Ocean?” are highlights of the young trumpeter’s early Blue Note output.

Nobody else has the unique vocal affectation that Holiday possesses; able to draw out each syllable in an all-knowing, almost-annoying, persuasive drawl. Every song — nay, every melody — is memorable just for Holiday’s one-of-a-kind mannerisms.” Continue reading…

Johnnie Ray was an early antecedent of rock ‘n’ roll — his affected over-emoting both sultry and full of starpower. In fact, it started a revolution. Just listen to “All of Me” for proof. Continue reading…

The last LP released during his lifetime, Hank Williams’ Moanin’ the Blues is even more country than his debut. But unlike Hank Williams Sings, with its rustic flavor and Dust Bowl Americana, this follow-up is a more up-tempo, honky-tonk affair. Moanin’ the Blues takes country & western down south — more pop-oriented, but also more American.

6. Wizard of the Vibes

This album is an essential recording for fans of bebop jazz and enthusiasts of the vibraphone. Because of the uniqueness of the instrument and Milt Jackson’s complete mastery as a performer, every song contains an exquisite, mysterious atmosphere. Continue reading…

Oscar Peterson’s expressive piano playing helps turn these classic Duke tunes into the quaint miniatures they were always meant to be. Accompanied only by Barney Kessel on electric guitar and Ray Brown on double bass, this is easy listening jazz with layers of subtlety just below the surface.

Pointing the way toward both hard bop and the avant-garde, Thelonious Monk’s Genius of Modern Music collection ranks among the most influential recordings of the 20th century. Francis Ford Coppola notwithstanding, this LP might be the greatest sequel of all time.

The angular melodies and cubist chord progressions, the eerie harmonies and intrepid piano playing — every last sound is quintessential, idiosyncratic Monk. He is without compare.

One of the all-time great jazz lineups is featured here. On top of the title pair’s extraordinary saxophone/trumpet interplay, the band is filled out by Thelonious Monk on piano and a ferocious drumming performance from Buddy Rich.

Perhaps the most memorable song is the highly-energetic “Leap Frog,” boasting dazzling solo trade-offs between Bird and Diz above Monk’s off-minor chords, all anchored by a fiery backbeat from Rich. But perhaps the best song is “Bloomdido”: one of the most influential songs in Parker’s repertoire.

The Amazing Bud Powell is the crowning achievement of a true American master. Bud Powell doesn’t seem to get the recognition he deserves, but this is the album that should be able to convince pretty much anyone that he’s among the greatest pianists of all time. Continue reading…

Even though Duke Ellington’s best work was made during the 1930s, Ellington Uptown is quite possibly his finest studio album. It’s also his most underrated. Featuring five of his greatest compositions, including the Louie Bellson showcase “Skin Deep” and the 14-minute “Harlem” suite, this LP is a timeless classic regardless of the era. Continue reading…