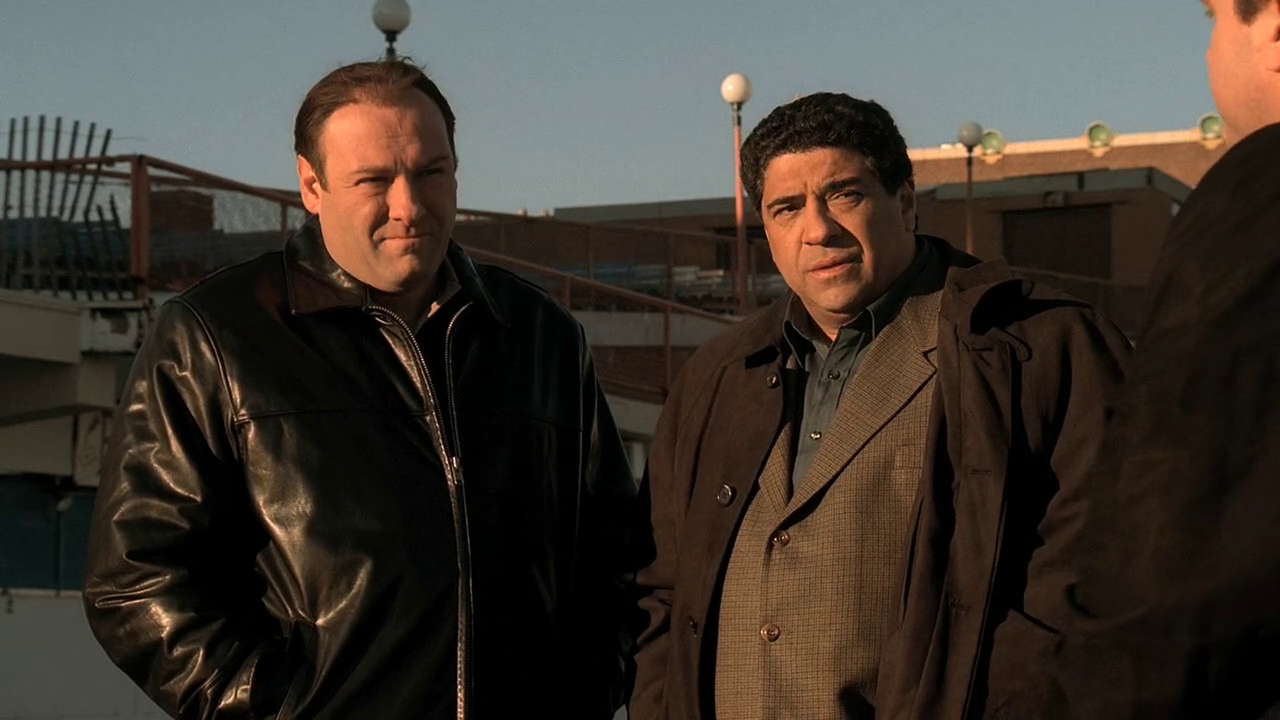 To Save Us All from Satan’s Power: “God Rest Ye Merry Gentlemen”

Have you ever wondered what’s going through Tony’s head during his opening-credits commute? When he finally arrives home, he slams the door to his Chevy Suburban and turns to the camera with an exasperated glare, this coming after he has given us a long, roundabout tour of New Jersey’s deteriorating infrastructure. He’s been watching the idealized past crumble all around him, and he’s pissed off.

It’s amazing that Sopranos‘ series creator David Chase has woven one of the show’s central, societal themes into the credit sequence — turn of the century America entering uncertain, postmodern times.

Tony idolizes the notion of the past, but any remembrance only gets him more depressed. He begins “…Satan’s Power” standing at a familiar landmark, the Asbury Park Boardwalk, looking out at the ocean and reminiscing of Big Pussy. Throughout the episode, flashbacks to 1995 further dampen Tony’s mood.

Season three has taken on a much darker tone in comparison to the lite-fare of season two. The shadows of Livia’s death, Melfi’s rape and Tracee’s brutal assault haunt every scene, and the visual palette is noticeably dark and gloomy. And while those three tragedies have surely formed a distinct, dreary atmosphere, the stage for season three was set with “Funhouse,” the season two finale. It’s easy to forget that the funniest overall season of The Sopranos ends with a severe calamity, thus making Big Pussy’s execution a turning point for the entire series.

As we saw in “Proshai, Livushka,” Tony is the type of person to hold his emotions inside and let them wallow. He didn’t cry over his mother’s passing until well after the funeral. Likewise, he has yet to truly reciprocate his feelings over Tracee’s death toward Ralph Cifaretto. But neither are as psychologically damaging as murdering a lifelong friend, and this introspective episode is the first time Tony gets to reflect.

Therapy is no help to him, the episode marking the first time in a while that he actually storms out of Dr. Melfi’s office. Talking it out with the likes of Paulie and Silvio proves no better, with Paulie taking a particularly hostile approach (“I’d kill him again if I could” and “In the end, fuck Santa Claus”). No, the best thing for Tony to do, because it’s all he knows, is to sulk in self-pity. Another minor panic attack strikes him.

The flashbacks to the not-so-distant past aren’t saturated in Goodfellas and Bronx Tale nostalgia, as they were in “Down Neck” and “Fortunate Son.” Instead, they pair well with the overcast air seen in the rest of the episode. The only things that differentiate past from present are the appearance of deceased characters like Big Pussy, Jimmy Altieri and Jackie Aprile, Sr., and the fact that Tony has a fuller head of hair.

“To Save Us All from Satan’s Power” is a Christmas episode, and Tony’s attention turns toward his X-Mas to-do list. But it does little to free his mind of stress. Arguments and altercations with Charmaine Bucco, Jackie Jr. and hostile Russians ensure that there is a never a moment’s peace for the embattled mob boss. Even Christmas morning brings new headaches, as Jackie Jr. shows up to gift Meadow a necklace (Tony had previously beaten him up after he caught him receiving a lap dance at a strip club). And Meadow’s gift, a Big Mouth Billy Bass singing “Take Me to the River,” gives Tony another uneasy flashback, the episode closing with a shot of the ominous ocean.

The previous two episodes, “He is Risen” and “The Telltale Moozadell,” featured a slight dip in quality. “To Save Us All from Satan’s Power” gets us back in the swing of things, and thankfully gives the Gloria Trillo subplot a much-needed break (she apparently went on vacation to Morocco for the holidays). The flashbacks provide much of the emotional heft, and the Christmas setting provides a sense of time and place, but the atmosphere is far from cheery.

Aside from Silvio’s entertaining dream sequence, the episode is told almost entirely through Tony’s point of view. Even though the installment is only 45-minutes long, it still feels full-length because of the reliance on Tony’s singular perspective. Without Gloria and Ralph to cause any distractions, Tony is free to muddle in his day-to-day gloominess. Soon enough, his signals get crossed, and unwrapping a talking plastic fish on Christmas morning becomes a daunting proposition.