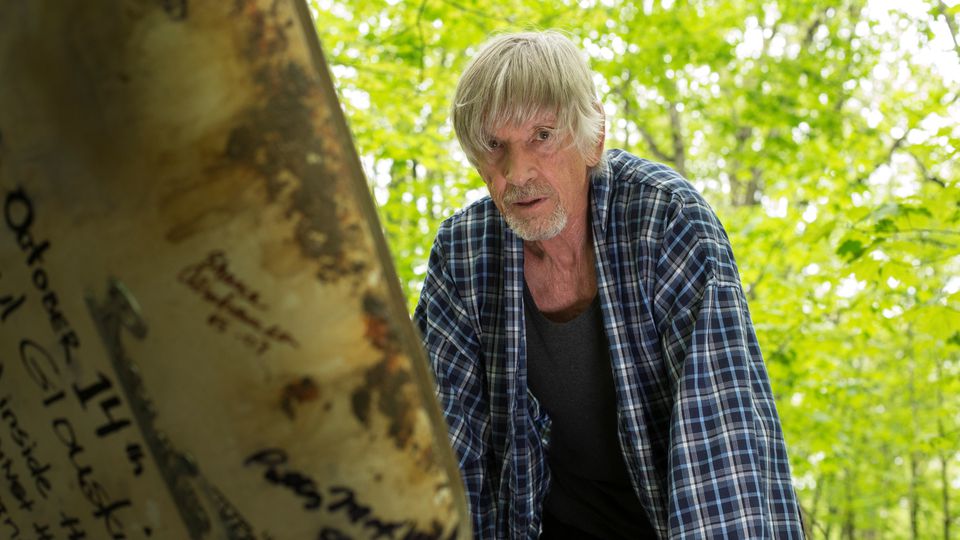 Episodes like “Guest” have revealed The Leftovers as an experimental show.  Not avant-garde, per se, but certainly left of center.  With this in mind, an episode like “Solace for Tired Feet”—difficult and Delphic—works tremendously well.

“Solace for Tired Feet” could be looked at as a letdown after the visceral “Guest”—another bleak episode that returns to meditative Mapleton—but it isn’t a failure by any means.  It is one of the series’ most intriguing episodes so far—playing up The Leftovers mythos to delightfully befuddling levels.

While “Two Boats and a Helicopter” had possible acts of God and “Penguin One, Us Zero” saw Kevin trying to remain rational, “Solace for Tired Feet” finds Kevin Garvey Sr. escaping from the mental institution and bringing strange prophecies with him.

“Solace for Tired Feet” is deliberately cryptic, trying to tell a family drama like “B.J. and the A.C.” but in an askew fashion.  It seems that Kevin’s sanity is starting to crumble—struggling to balance his burgeoning relationship with Nora, his strained relationship with his daughter, his father’s escape and his increasingly strange dreams.

Typical of The Leftovers, “Solace” raises more questions than answers—more than usual, too.  Kevin’s surreal dream sequence seems to have one foot in reality despite its time-bending quality, and he wakes the next morning with a barking dog tied up outside.

Things only get stranger when Kevin Sr. is finally captured.  Guided by the voices in his head, he has been relentlessly scouring the town for the May 1972 issue of National Geographic.  “They were very specific, it had to be this one,” Kevin Sr. tries to explain to his son.  He keeps offering the magazine to him, telling him that he “must accept” his destiny.

Of course, Kevin Jr. has been a reluctant antihero so far.  He doesn’t want anything to do with his crazy old man, whose wild goose chase may just be a product of his own schizophrenia.  Nevertheless, Kevin Sr.’s words seem to carry some form of unescapable magical truth.  Kevin freaks out when he finds that Jill had ordered Nat Geo’s May 1972 issue at grandpa’s request.

Tom, meanwhile, is seeing his own world crumble apart.  He’s now in Gary, Indiana and it’s been two months since he last heard from Wayne.  Christine, now about 8 months pregnant, is in increasingly worse shape.  At the moment of despair, Wayne finally calls.

Yet Wayne is not here to save the day.  He is starting to become unhinged himself, rambling on and ordering Tom to deliver $3,000 to a drop-off point.  Tom agrees to do it but tosses the phone, severing his ties with Wayne forever.

As we saw last episode, Wayne was in New York City, apparently close to death and with just enough time left to “heal” Nora.  His magic, or whatever it is, seemed very real then.  In “Solace for Tired Feet,” however, he seems to be nothing more than a delusional phony—a megalomaniac of Jim Jones proportions.

It’s Tom’s discovery of two familiar faces—a young 20-something accompanying another pregnant, Asian girl—that starts to unravel the Holy Wayne mythos.  Who knows how many others Wayne has given the exact same, “sacred” mission to? Perhaps he’s taking advantage of his messianic reputation as an excuse to indulge in his fetishistic underage fantasies.

Did the hugs mean nothing, then?

Tom returns to Christine to find she has given birth.  It’s more Rosemary’s Baby than Children of Men—in terms of emotional ambiance, at least—but ensures that Tom’s tribulations aren’t over yet.  Ominous rather than joyful.  A harrowing way to end the episode.

Tom’s storyline expertly plays off of stepfather Kevin’s— “Solace for Tired Feet” simultaneously shedding doubt and lending credence to theories of magic in a post-Departure world.

The cryptic nature of this episode rewards well on rewatch.  Kevin Sr. always brings a mystical quality to the show and the questions that arise from his presence are immensely watchable, rather than frustrating.  In other words: fun.

“Solace for Tired Feet,” while not perfect, is a sort of hidden gem in The Leftovers’ back catalogue.

-The May 1972 issue of National Geographic is of utmost curiosity in this episode.  Does this have anything to do with the Sudden Departure? By withholding information, The Leftovers has made me desperate for answers, even if they are as far-fetched as this.

-The issue references “the riddle of the Minoans,” an ancient civilization that mysteriously disappeared.  Archaeologists used to speculate that a volcano wiped them out, but it was ruled that this was impossible.  Perhaps an earthquake, a la the cold open to Season 2?

-Another headline on the front cover— “Cairo, Troubled Capital of the Arab World”—ties in to the show also.  During Kevin’s surreal, time-bending dream sequence, a voice on his walkie-talkie says “Cairo.”  Furthermore, the following episode is called “Cairo” and takes place in Cairo, New York.

-Even the third headline— “The Spider That Lives Underwater”—is cryptically referenced in this episode.  Tom hears Christine murmur “there’s spiders underwater” while she is sleeping.

-It’s starting to become obvious that Kevin is sleepwalking.  He keeps waking up on the floor, not knowing what has happened the night before.  Jill’s friend Aimee was apparently present when Kevin nabbed the barking dog.  She asks Kevin, the morning after: “You don’t remember what you said to me last night?”

-Kevin’s only comfort is his burgeoning relationship with Nora.  Their consummation at the end of the episode is a little graphic, but well-earned.

-One downside to the episode: Jill Garvey and her high school friends make another appearance.  This time they are causing adolescent ruckus in the woods, with Jill getting stuck in a refrigerator for over an hour thanks to some stupid hazing ritual.  Grandpa Garvey randomly comes out of nowhere to save the day.  Luckily, this all happens pre-credits.