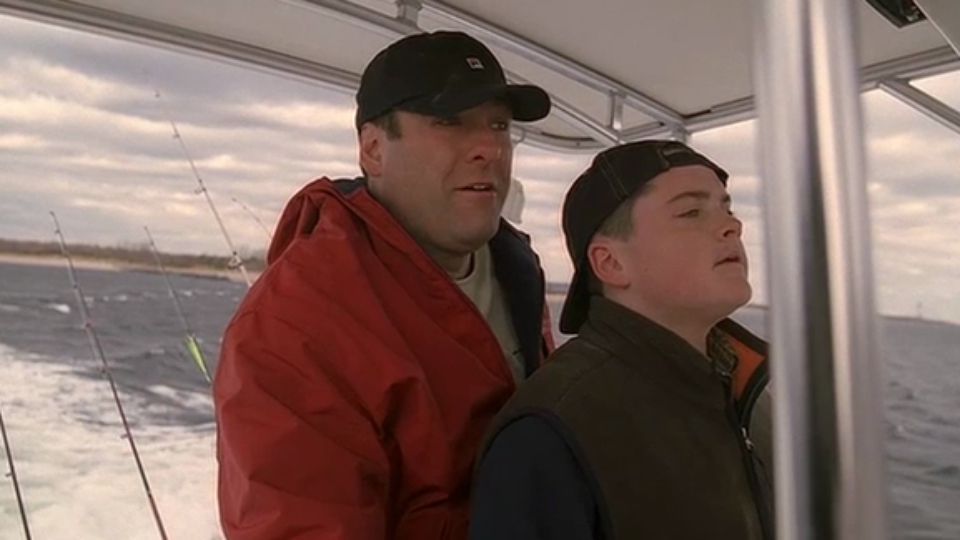 Bust Out: “Wheel in the Sky Keeps on Turning”

Ten episodes in, and season two’s slow-burning storyline is just now starting to move incrementally forward, even though it still seems like nothing is happening. Yet there’s nothing wrong with increments (or storylines in which nothing happens), especially when it comes to The Sopranos. “Bust Out” is another great episode that relies on comedy and character development, even in the face of high-stakes tension.

At the start of the episode, a witness comes forward to the police, able to identify Tony and “a husky accomplice” (Big Pussy) as the murderers of Matthew Bevilacqua. It immediately sends Tony’s world into a tailspin. As Dr. Melfi observes during a fraught therapy session, Tony is scared — desperately shouting at Paulie to find out who the witness is, setting aside money in case he needs to make a quick getaway, and trying to squeeze in some last-minute quality time with neglected son AJ.

Tony remains distant throughout the episode, never letting on to Carmela or the kids that the FBI may finally have him cornered. He misses AJ’s swim meet (AJ? Swimming?), remains arrogant and cold toward Carmela, and becomes a golem to Davey Scatino. But considering the amount of stress he’s under, who can blame him?

I wasn’t the biggest fan of AJ during season one, but the character has made steady improvements here in season two. First off, he got rid of the bowl cut. Second, the played-out trope of depressed, moody teenager suits him perfectly. It gives him less dialogue, for one, but it also reflects how bad of a father Tony has been. He wasn’t only absent from AJ’s swim meet; he’s been absent his entire life.

In a rare moment of vulnerability, Tony offers this heartfelt confession to Melfi— “I just gotta stay around a little while longer for the kids. Especially my boy. Once he’s out of the house, the government can do whatever the fuck they wanna do. Give me life, give me the fucking chair, whatever they want.”

Tony tries to connect with AJ throughout the episode, but he doesn’t break through until the final scene — father and son going for a boat ride, purposely capsizing two men in a canoe as they set forth from the harbor. The wheel in the sky keeps on turning.

But even with a potential murder charge hanging over his head, Tony’s mob business doesn’t stop. The titular “bust out” happens to Davey Scatino, the degenerate gambler from “The Happy Wanderer,” who loses his sporting goods store as a result of his poker debts. Tony and the gang bleed the business dry from the inside out, “like fucking termites.” Not too dissimilar to what Tony and crew did to Schlomo Teittleman’s hotel.

So, golem, termite, same thing. But Tony’s just doing his job, after all. Let’s not forget, Davey made a bet that he couldn’t keep, and now it’s time for him to face the consequences — was it inappropriate for me to laugh at his darkly comic, suicide attempt?

Meanwhile, Carmela spends the hour smitten with an interior decorator named Vic Musto (brother-in-law to Davey). She even shares a passionate moment alone with him in the bathroom. But considering how distant Tony has been throughout the episode, who could blame her?

While this sub-plot may sound similar to a daytime soap, it’s by far the episode’s best. Carmela is aware of Tony’s many infidelities, yet remains incredibly faithful (albeit racked with guilt) throughout the series. Her brief “affairs” — with Father Phil, Vic and later Furio — are based on emotions rather than physical contact, sensual as opposed to sexual, which is why they end up feeling so painful.

Carmela’s only want is to be wanted, which is something Tony doesn’t provide, and her momentary fling with Vic Musto only highlights how lonely she really is. A scene in which she cries after a stolen kiss showcases actress Edie Falco at her best.

The sub-plot also gives birth to a new euphemism: “wallpapering my dining room.”

Despite the episode’s leisurely pace and comedic atmosphere, the uneasiness caused by Tony’s legal threats hang over the entire installment. The tension is finally resolved when the witness discovers that the guy he’s finking on is a mob boss. Afraid of the repercussions, he quickly recants his testimony.

Naturally, series creator David Chase portrays the witness and his wife as wimpy intellectual types who listen to Webern, read Nozick and turn out to be nothing more than a pair of phony hypocrites. It’s also true to The Sopranos‘ aesthetic (and Chase’s own cynicism) that this storyline — possibly the most exciting of the season so far — is concluded with an almost frustrating anticlimax.

Tony gets off scot-free, only going to show that people (and TV shows) never change. The wheel in the sky keeps on turning.