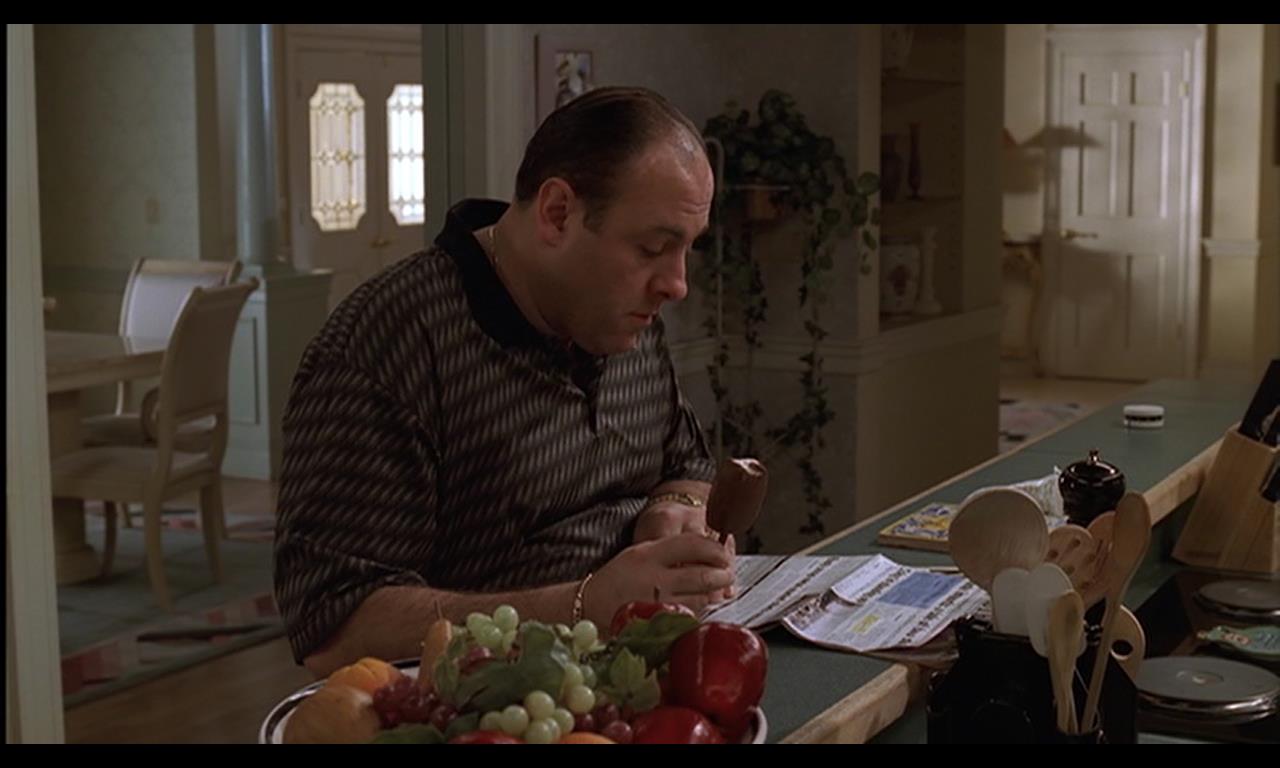 House Arrest: “The One Where Nothing Happens”

At its core, season two of The Sopranos ultimately boils down to the season-long story arc of Tony Soprano vs. Richie Aprile. Upon rewatch, however, their conflict is not as visceral or tense as you might have remembered. In fact, it’s nipped in the bud before it can even escalate to a dangerous level.

Penned by Terence Winter, who specializes in humdrum conglomeration, “House Arrest” is inconsequential to the core. There’s even a special meta-awareness unto itself — “So, what else is new?” Tony asks the guys after having spent the entire episode away from mob-related activities. “Nothing,” Big Pussy replies.

After dodging last week’s legal bullet, Tony is advised by his lawyer to spend some time at his legitimate job at Barone Sanitation. “House Arrest” consists of such mundanities as Tony organizing an office basketball pool, Uncle Junior getting his hand stuck in a garbage disposal and the soon-to-be wed Janice and Richie moving into their new home.

Surprisingly, it’s one of the most artfully composed episodes of the entire season. “House Arrest” moves with a brisk pace, and the hour is over before you know it. An uneventful week is made compelling by sharp dialogue and good-natured humor.

For what it’s worth, season two is also The Sopranos’ funniest. Doubling down as the Nothing Happens season, it should come as no surprise that most of the installments are based in comedy. For example, actor Dominic Chianese delivers a hilarious, pathos-filled performance in one of Uncle Junior’s finest hours.

He spends the installment cooped up in his home, reconnecting with an old flame from yesteryear. The most heartwarming scene comes when she puts on his sleep apnea mask and kisses him on the forehead.

Meanwhile, Tony spends the hour in a pissed off mood, agitated with the boring lifestyle he’s forced to briefly adopt. “How ‘bout those Nets?” is a repeated conversation-starter throughout.

In therapy, Dr. Melfi tells Tony that “antisocial personalities,” when they “aren’t distracted from the horrible shit they do,” have time to reflect on their actions and the toxic influence they have on others. Tony, of course, has been doing nothing all episode, and Melfi’s sentiment symbolizes itself in the rash that Tony develops on his arm — an itch he can’t satisfy until he’s finally back with the fellas at Satriale’s pork shop.

Yet Melfi has her own issues going on as well (due to Tony’s impact, of course). For one, she’s been drinking more and more, casually downing a double-shot of vodka before every session with Mr. Soprano. She also gets into a drunken tiff at a restaurant, much to her son’s chagrin.

Usually, forays into Melfi’s world outside the office can make for some disenchantment on behalf of the viewer, but her storyline in “House Arrest” fits in perfectly with the episode’s easygoing vibe. Even her own therapy sessions with Dr. Kupferberg feel right at home.

The episode ends with a magnificent closing shot of the gang simply hanging out outside the pork store. Even Federal Agent Harris drops by to introduce his new partner and have a friendly chat. The Nets are once again the topic of discussion as Tim Van Patten’s camera cranes upward to Johnny Thunders’ “You Can’t Put Your Arms Around a Memory.”

Some of my favorite Sopranos moments are when the show spends casual time with the characters, just doing nothing. “House Arrest” makes it feel like you’re doing nothing with them. It’s like spending time with close friends.

These are the good days, the type that every mobster would trade violence and bloodshed to relive just once. When Tony told us to “remember the good times,” this is what he meant. Cherish the little things.