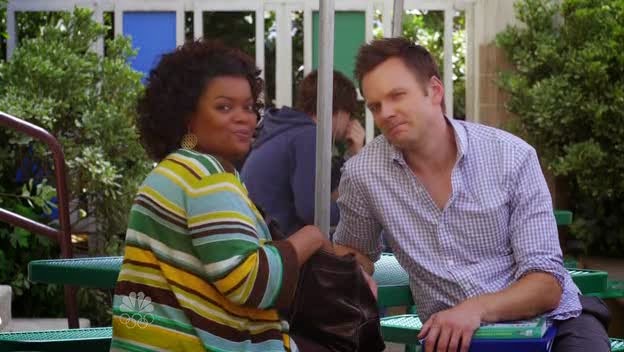 Shirley has been the least defined character so far.  The writers have made her out to be a semi-stereotypical Christian black woman, so it comes as no surprise that she’s been the least interesting, too.

Community excels at meta-humor—self-referential jokes that often break the fourth wall.  Sometimes, the meta-humor isn’t even in the form of zingers.  In “Social Psychology”, Jeff acknowledges the truth about Shirley’s character and starts out the episode actively trying to avoid her.

He ends up finally walking to class with her and finds that they share a common love for zingers and put-downs.  They particularly enjoy making fun of Britta’s new hippie boyfriend, Vaughn.

“Social Psychology” continues Community’s fast start.  By this point, Jeff Winger has become a favorite of mine—nearly every line is comedic gold.  The rest of the cast has already formed a rare chemistry, and it has turned every conversation between them into an Instant Laugh Machine.

Even the side characters bring instant energy whenever they appear onscreen.   Señor Chang has been killing it so far, while the enjoyment of Professor Ian Duncan depends on your enjoyment of comedian John Oliver.  I usually find Oliver to be damn funny, but in “Social Psychology,” Duncan only gets a few good lines in.  The rest are mostly misfires.  No worries, bro, since he’s, like, tenth on this show’s pecking order, anyways.

The primary focus in the episode is Jeff and Britta’s relationship, which is now compromised since she’s dating Vaughn.  But it intertwines nicely with Jeff and Shirley’s relationship, while ending on another prestige drama-worthy high note, uncharacteristic of a network sitcom.

It’s only the fourth episode, and the show is coming together nicely.  It’s funny and I care for the characters.  And that’s all you need, really, from a sitcom.

Community hasn’t really had much of a serial plot so far.  It’s not completely stationary like Seinfeld, but it’s certainly no Arrested Development.  A common theme throughout TV as an art form—some of the best material comes from simple, “nothing happens” fare.  That is especially true of sitcoms.

Community doesn’t need to rely on plot when it’s got great jokes and well-defined characters to deliver those jokes.