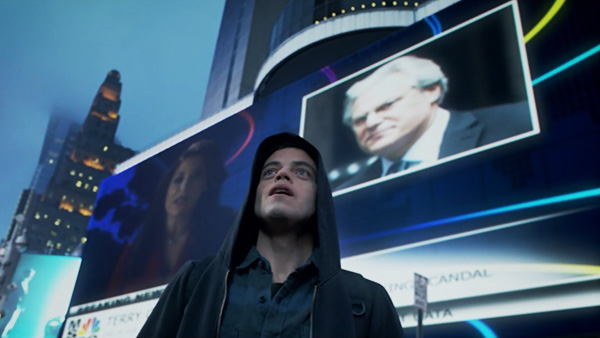 Mr. Robot is a show with grand prestige ambition.  It carries itself with big-balls confidence right from the get go and doesn’t let up.  From the robust title card to the myriad pop culture references, this is a show with a flair and charisma well beyond its years.

Many shows in the Peak TV era announce themselves with beefy juiced-up pilots that operate more like mini-movies.  Shows like Fargo, True Detective and The Night Of have all benefitted from this approach and so does Mr. Robot.

The pre-credits intro is taut and filled with excitement.  Elliot Alderson, an introverted young vigilante-hacker, exposes a coffee shop owner for the pedophiliac scum that he is, all while deploying a detached and depressed sense of charismatic cool from behind his wild staring eyes.  The darkwave synthpop soundtrack pulses, the tensions flare, justice is served.  Our first taste of Mr. Robot operates as a pilot-within-a-pilot: an entertaining sequence that lays all its cards on the table and either hooks you for the rest of the episode or doesn’t.  For me, I was hooked.

But, I’ll admit, it took a little while.  This is my third time watching the pilot.  When I first tried to watch Mr. Robot a year ago, I couldn’t get into it.  Depending on your level of cynicism, the premiere has many flaws—many of them on display in that opening sequence in the coffee shop.

The bad?  Well, Mr. Robot is a show highly indebted to and aware of the world around it.  Creator Sam Esmail is a confident and cocky motherfucker—in other words, a true TV auteur.  He’ll write and direct the entirety of season two, and even though he isn’t behind the camera just yet, he already knows what he wants his show to be.

Skeptics will dub all the homages as rip-offs.  And there are plenty of homages.  From Fincher to Kubrick to Carol Reed to Chris Nolan, Sam Esmail’s visual and storytelling aesthetic is influenced by all of ‘em.

But the homages/rip-offs aren’t limited to film.  Like I said, Mr. Robot and Sam Esmail are self-aware—they know of the Peak TV times they exist in and so they also seek influences from their contemporaries as well.  To point out all the standard TV tropes and clichés in “hellofriend” would be to trivialize a great achievement, but let’s do it anyways.

Elliot bears more than a few similarities to Dexter Morgan.  Both identify as being incapable of real human emotion.  Both work as cogs in the machine by day (Dexter as a blood-splatter analyst for the Miami police, Elliot as a techie for cyber-secuirity company Allsafe), both enact vigilante justice by night (Dexter is a serial killer who kills serial killers, Elliot is a skilled hacker who uses his powers for good).  Both keep trophies of their “victims” (Dexter’s blood slides, Elliot’s blank CDs).  And Elliot’s childhood friend and Allsafe coworker, Angela, is no fundamentally different than Dexter’s sister, Deb.  Etcetera, etcetera, etcetera.

The similarities to Dexter are only the tip of the skeptics’ iceberg.  Even larger and more universal clichés are also on display: the moody antihero, the constant voiceover narration, the continuous fourth-wall breaking, the therapy sessions, the allure of non-weed drugs (morphine and molly, in this case).  The list goes on and on.

And then there’s the original quirks that might grate on you as well.  The references to real-life figures like Tom Brady and Bill Cosby.  The anti-capitalist hacktivism dogma.  Even Rami Malek’s performance—as antisocial bug-eyed constantly-hooded computer-savvy older-than-he-looks skinny-jean-wearing emo-core semi-cool geek—could be enough to deter you.

But that’s the cynical approach.  Mr. Robot transcends its homages/rip-offs/whatever-you-call-thems by way of supreme ballsy confidence.  It has all the tropes and clichés you can possibly imagine, but it uses them with so much bravado!  It’s beautiful to look at, it’s highly entertaining and it’s surprisingly relevant.  What’s not to like?

Not only that, but the lengthy pilot ends up subverting its own blueprint by the end of the hour.  Elliot hacks some more no-good-niks throughout the episode (his therapist’s adulterous boyfriend among them) but this is not a show that is going to operate on a simple Hack of the Week basis.

Halfway through the episode, Elliot saves the Allsafe mainframe from a break-in and discovers that the culprits behind it are a mysterious group known as fsociety.

Shortly after, Elliot meets the group’s leader—played by Christian Slater—who identifies himself as, you guessed it, Mr. Robot.  Mr. Robot tells Elliot of fsociety’s grand mission: to commit the world’s largest hack and take down the conglomerate E-Corp (which Elliot has conditioned himself to perceive as “Evil Corp”), thus permanently erasing most of the world’s debt records.

It is with this that Mr. Robot reveals its true ambitions.  Despite being influenced by several other shows and films, Mr. Robot’s overall goal is to be as epic as Breaking Bad—a tightly-written and propulsive thriller that manages to be deep, experimental and cool.  On the USA network, no less.

“hellofriend” ends with Elliot being told to get into a car (by the mysterious men in suits who may or may not have been following him all episode) and he arrives at E-Corp headquarters.  Elliot has already helped Mr. Robot and fsociety frame Evil Corp’s CEO, thus putting the mysterious plot into motion.  In a scene that echoes the episode’s opening shots, Elliot finds himself in a room surrounded by several rich men in suits—the top 1% of the top 1%, who control the world from behind the scenes.  Elliot’s narration breaks the fourth-wall again: “Please tell me you’re seeing this too.”

This is everything you could want from a series premiere.  It immediately pulls us into a unique world with a memorable lead and an addictive plot, all while being incredibly shot, well-paced and with a sense of bingeworthy intrigue.