Following up Mr. Robot‘s über-pilot was always going to be an impossible task, but creator, writer and director Sam Esmail handles the always-tough second episode with brash confidence and big balls.  “eps1.1_ones-and-zer0es.mpeg” slows things down a little to build the story and its characters, while still managing to maintain excitement and mystery throughout.

The pre-credits sequence is excellent, picking right up from where the epic pilot had ended.  Elliot finds himself at E-Corp headquarters, surrounded by Tyrell Wellick and his many lawyers.  What initially starts out as a sinister conversation soon turns into a job offer for Elliot.

The scene is quite possibly the best of the episode.  Sam Esmail likes to alternate long shots with close-ups, pushing the characters to the edges of his symmetrical frames.  There’s a definite Kubrick vibe going on here, which may get the Mr. Rip-Off mob out in full force.  But Esmail is let off the hook in this case because he’s channeling Barry Lyndon rather than 2001 or The Shining.

The striking prelude leads us into the episode proper, which furthers the plot as well as deepening Elliot’s psychological complexities.

For all his systematic routine, Elliot’s a paranoid little fella.  After hacking Tyrell Wellick with ease, he abruptly wipes all his data and hard-drives under the assumption that maybe Tyrell wanted to be hacked.  Yet Elliot doesn’t know for sure, and neither do we (his voiceover proves he hasn’t forgotten about us), but it just goes to show that our already unreliable narrator is also a little impulsive.

Not only that, but he is also starting to stray from his rigid methodology of drug-taking.  Last episode he told us about how he limits his morphine intake to 30 mg a day, while also balancing it out with suboxone withdrawal meds, but in “ones-and-zer0es” he starts to flirt with stupors.  He gets an early re-up from his dealer/friend/friend-with-benefits Shayla.  It is here where he meets her supplier—an abusive and sinister meth-head named Fernando Vera.

Along with Tyrell and Mr. Robot himself, Shayla is another side character who becomes more compelling and fully-formed with her role in this episode.  She is the modern take on the classic “whore with a heart of gold” narrative, only as a drug dealer and not a prostitute.  But she does suffer from the same tragedies as that other profession, as Elliot discovers that Fernando has date-raped her.

Elliot does the right thing by episode’s end and gives an anonymous tip to the police, but the fact that Fernando supplies Elliot’s drugs provides an interesting moral dilemma.

On the other hand, Darlene—a member of fsociety—has not yet reached Shayla’s level of watchability.  She shows up at Elliot’s apartment and brings him back to fsociety’s boardwalk headquarters, but she comes across as annoying in her conversations with him.  She does get in a few laughs, though, I’ll give her credit.

Meanwhile, Christian Slater has been doing a fantastic job at making the titular Mr. Robot instantly memorable.  The next phase of his plan is—taking from Wikipedia now—to hack into a gas plant and cause an explosion, destroying Steel Mountain, the adjacent offline backup facility used by E Corp.  Elliot backs out, not wanting to risk lives. 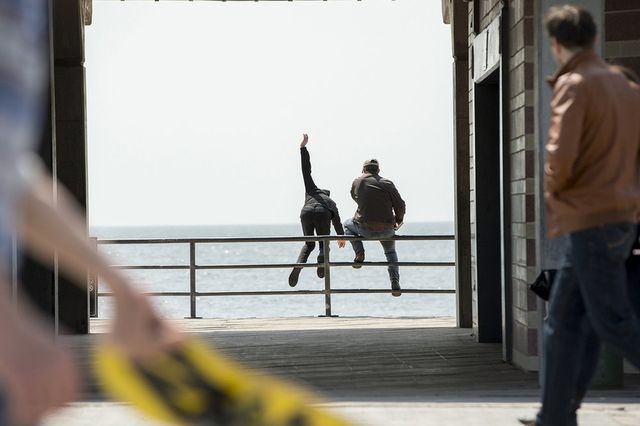 The final scene is another bingeworthy ending that primes us for “eps1.2”.  Elliot meets with Mr. Robot again, the two of them sitting on the boardwalk fence, overlooking the beach.  For Elliot to return to fsociety, Mr. Robot wants him to talk about his father’s death, to which a sullen and detached Elliot obliges.

He tells about how his father got leukemia when Elliot was only eight.  Against his father’s wishes, he told his mother of the sickness, which caused his old man to go into a steep depression.  Right up until the end, he held resentment against his son and wouldn’t even look him in the eyes.  Elliot finishes the story: “We cool?”

In a sudden turn, Mr. Robot sides with Elliot’s father.  “You ever stop to think he was right?” He pushes him off the railing and walks away, chastising Elliot for breaking the pact that he made.

While “ones-and-zer0es” is not as exciting as “hellofriend”, it ultimately didn’t need to be.  Sam Esmail gives Mr. Robot the feel of a veteran series, no second-episode jitters here.  There are some missteps—Elliot’s therapy scene among them—but Mr. Robot is already cementing itself as the greatest series in USA Network history.