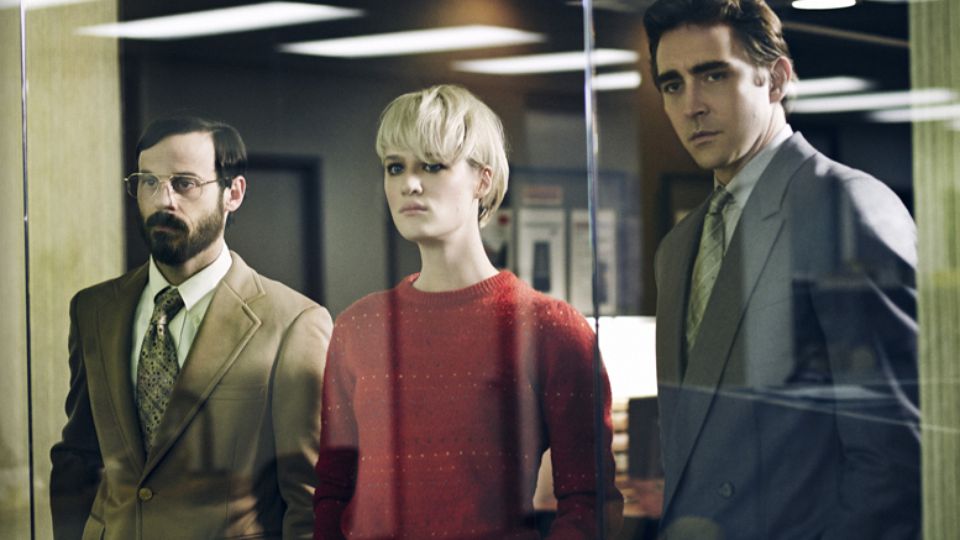 This is my first time watching Halt and Catch Fire.  The only spoilers that I know of is that the show supposedly experienced a tremendous leap in quality in its second season and that has supposedly carried all the way through to the third.  But that means the first season is obviously not as good.  And, judging from “I/O”, these rumors are true.

Halt and Catch Fire has an interesting period setting and culture—early ‘80s Texas during the personal computer revolution—but that is basically all it has going for it.  The show tries too hard to be one of the Great Dramas and it ends up closely following the Matthew Weiner Prestige Playbook.

The show’s lead character is Joe MacMillan, played by Lee Pace.  Joe is a smooth-talking genius businessman type.  He wears expensive suits, drives fast cars, likes fast women, and has a troubled past.  He is Dot.Com Draper, the techie reincarnation of our favorite Mad Man.

The similarities between Joe and Donald Draper are astounding, and Halt and Catch Fire is very much a Mad Men rip-off.  No doubt it’s a case of the network, AMC, trying to cash in on a proven formula, but a lot of the blame has to go on the creators, Christophers Cantwell & Rogers.

“I/O” even hits on many of the same beats as Mad Men’s pilot “Smoke Gets in Your Eyes.”  Both shows begin with a text that defines the meaning of the show’s title.  And both shows feature business pitches made by Don Draper.

I simply can’t get over how much Joe is like Don.  Lee Pace even looks and sounds just like Jon Hamm—shit, they even flex the same fucking vein in their forehead!  Adding to his antihero makeup, Joe is also a master-schemer and it’s all intended to be secretive and the show wants us to be intrigued and ask, “oh god, what could he possibly be planning?”  But it’s not.  Intriguing, that is.

Joe teams up with Gordon Clark, a disgruntled sales engineer at Cardiff Electric, to reverse engineer an IBM computer with him.  I’m not a computer guy, so I don’t really know what is going on from a technical standpoint plot-wise, but I do know that Gordon is another type of character we’ve all seen before.  He’s Walter White-like in his ambition to be something more than what he is.  He’s an unsatisfied employee with a loving family who knows he is capable of far greater things.  As a result, he goes into business with Joe to pursue his computer dreams.

Joe also recruits the punk genius Cameron to help them on their quest to find the next big thing in computers.  She’s a fiercely independent strong female character, a la Peggy Olsen.  She also has sex with Joe early on in the episode (pre-credits!) for no good reason, a la Peggy Olsen and Pete Campbell in the Mad Men pilot.

And, of course, Gordon’s wife Donna—played by Kerry Bishé—is the frightful mashup of Betty Draper and Skyler White that we can’t unwish.  The scene where she asks her husband to pass the salt is particularly yikes.  I may be exaggerating slightly, but she is another copy-and-paste type character.

And it’s all a damn shame, because Halt and Catch Fire inhabits an interesting and unique setting that potentially could make for great TV.  And while it doesn’t have a unique visual style yet, it does have the type of cinematic flair that is a staple of prestige TV.  Not only that, but it’s got a kick-ass soundtrack too!  But instead, it’s just a Mad Men clone with no unique qualities at all.

I’ve been pretty harsh so far in this review, I’ll admit.  It is a pilot after all, and I have no idea what comes next.  This pilot could be one that serves specifically to get the characters into place.  By episode’s end, Joe, Gordon, and Cameron are all working with each other, trying to build a personal computer to rival IBM, and maybe now the show can truly start.  However, as far as first impressions go, Halt and Catch Fire was very lackluster.