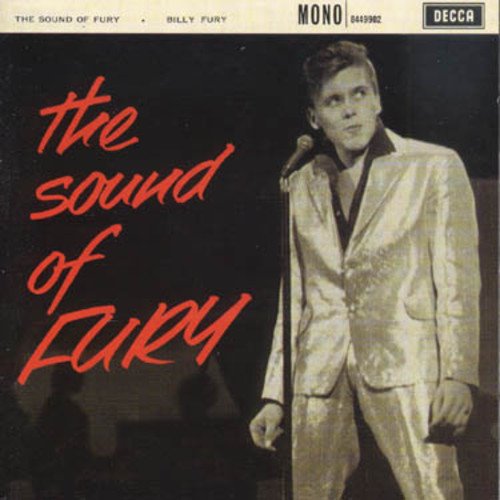 Album: The Sound of Fury

Ronald Wycherley a.k.a. Billy Fury was born in Liverpool in 1940. After making an instant impression upon famed pop impresario Larry Parnes, the teenage Fury quickly rose to the top of the English charts. He was only 20 years old when he released his debut album, The Sound of Fury, which became an instant hit in the U.K in 1960 thanks to Fury’s excellent imitation of Elvis Presley.

Perhaps that assessment is a bit unfair — early rock & roll was filled with copycats of the King. Aside from established stars like Chuck Berry and Buddy Holly, there were very few originals at this early juncture in the genre’s history. Fury sounded like Elvis and danced like him too; the only difference was that he did it in England.

Nowadays, Fury’s biggest claim to fame is being an early influence for the British Invasion. Nevertheless, The Sound of Fury is still a worthwhile piece of rock history that features catchy tunes, confident singing and a surprising amount of boogie-woogie piano.

The album’s main draw is its ballads — chief among them “You Don’t Know” and “Alright, Goodbye” — which set Fury apart from his Elvis-imitator contemporaries. It’s no surprise that he would transition toward becoming a pop singer (rather than a “rock” singer) in the years that followed.

The Sound of Fury Album Review