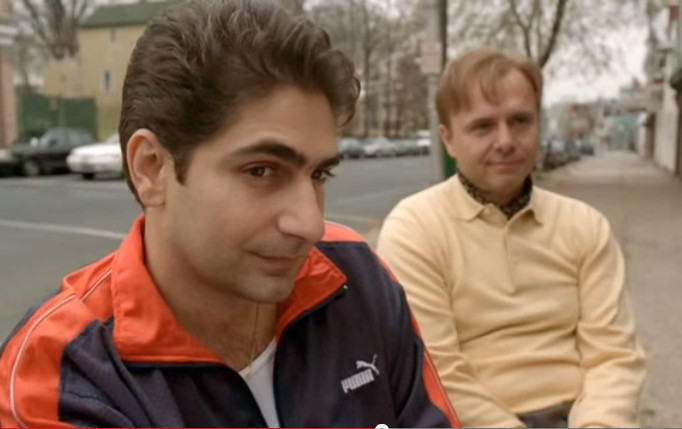 “Following the Light of the Sun, We Left the Old World”

Christopher” isn’t necessarily the worst Sopranos episode ever, but it is the most redundant. Did we really need a 54-minute diatribe on the dangers of Italian-American nationalism? Are we as an audience really so dumb that we need Tony Soprano to convince us that Christopher Columbus isn’t someone we should idolize?

In the eyes of series creator David Chase, yes, all of the above.

Even though Chase has always viewed his audience with contempt, he really should give us a little more credit. “Christopher” feels like we’re being talked down to — the rare Sopranos episode that is both preachy and pretentious. It tries to be topical, but it fails to resonate, and when it attempts sarcasm, it chooses to be earnest rather than ironic.

Whenever the series steps outside its comfort zone, it tends to come up short. Remember Massive Genius from season one, or Jon Favreau in season two? Likewise, whenever The Sopranos provides social commentary on Italian pride, the dialogue rings hollow.

Unfortunately, “Christopher” exemplifies the worst of both worlds: a shallow spotlight on Native Americans and a ham-fisted story about Columbus Day. And it doesn’t even try to be clever about it — when it comes to depicting minorities, The Sopranos will always trail far behind The Wire.

It also doesn’t help that the main characters are all unrepentantly racist. Silvio Dante takes personal offense to a group of Native Americans protesting the local Columbus Day parade, which sets him off on an episode-long odyssey of blackmail and petty revenge. His plan falls apart when he discovers that everyone already knows Iron Eyes Cody was Sicilian.

Once again, Chase is deliberately trying to make us hate the characters by highlighting their immorality. However, the attempt is exacerbated by the overall lack of quality. The action feels forced, the messaging too on-the-nose and the recycled thematic territory is akin to beating a dead horse.

Even the Native American characters themselves are stereotyped for the sake of advancing the storyline.

The role of Italian-Americans in modern-day society is one of The Sopranos’ major themes, but usually it’s shoehorned in as a subplot. “Christopher,” on the other hand, overwhelms us with its politics, and it seems that every character from AJ Soprano to Hesh Rabkin wants in on the action. We even get Dr. Melfi’s husband, Richard, spouting off his obligatory, anti-Mafia propaganda.

But it doesn’t stop there — the episode references school textbooks, Star-Ledger articles and clips from The Montel Williams Show in an effort to drive its point home. Never before (and, thankfully, never again) will The Sopranos be so clumsily unambiguous.

Who’s to blame for this bungled attempt at social commentary? The episode is written by Michael Imperioli, yet despite the title, we don’t get much from Christopher Moltisanti. Likewise, Tony himself has only a small role. Therefore, the one who deserves criticism is Chase himself, especially considering that this is a creative reservoir he has returned to time and time again.

Luckily, the ending is good enough to somewhat save the installment. It’s the best scene not because it’s the last, but because it features the only genuine dialogue of the entire hour. Tony delivers a memorable rant that tears apart everything that Silvio stands for, and although Tony’s worldview is flawed, we agree with him due to the nature of all that has transpired.

In the end, Tony’s message toward Christopher Columbus and phony nationalism ultimately boils down to this: “Who really gives a fuck?” Unfortunately, the same can be said about the episode itself.

Season four is unfairly maligned as The Sopranos’ “worst,” and “Christopher” is often pointed to as the primary reason. However, it can’t be argued that the episode features a substantial dip in quality when compared to the rest of the series. Sticking out like a sore thumb, its reputation is well deserved.