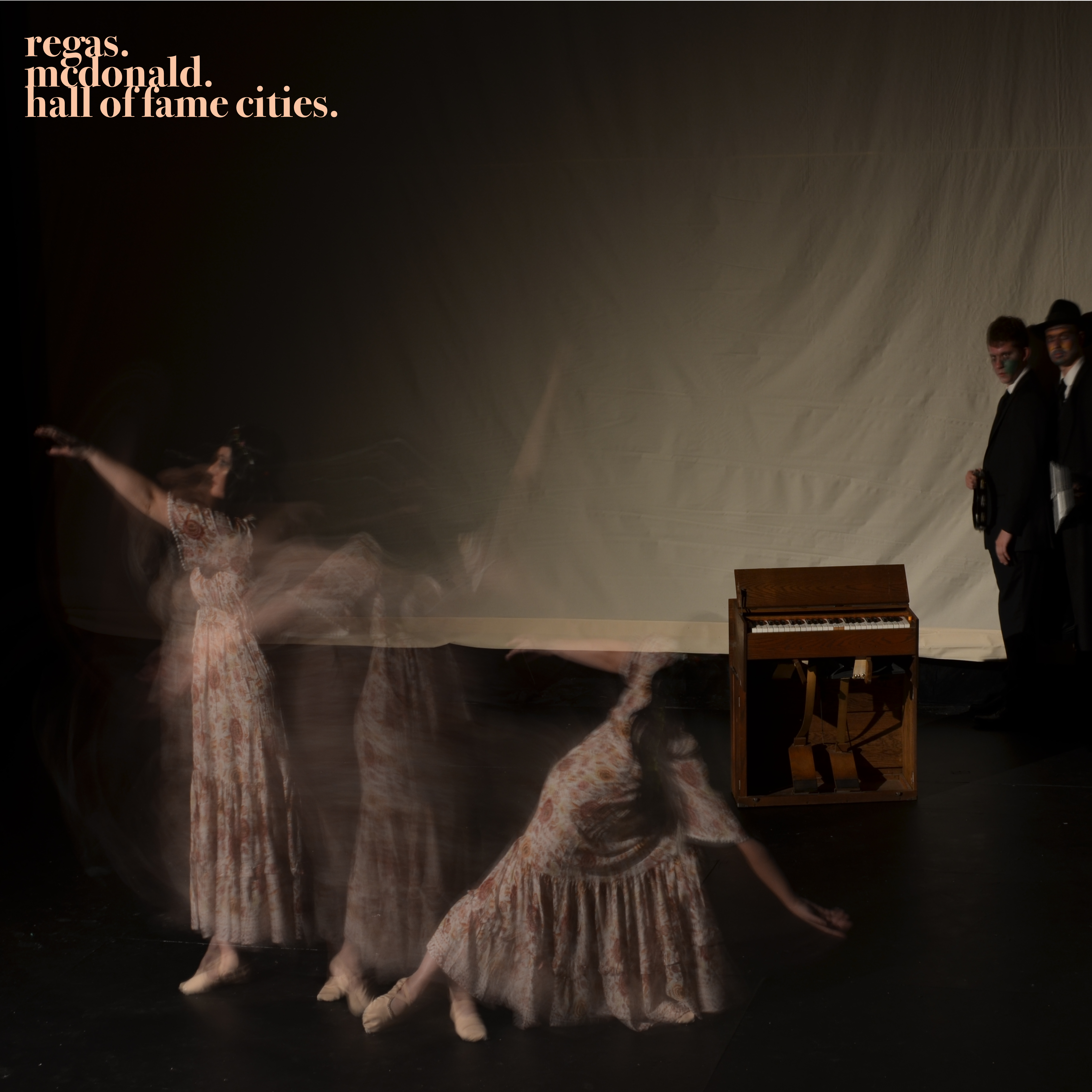 Hall of Fame Cities by Regas-McDonald

Because Colin’s Review isn’t my full-time job (more of a side project/hobby to distract from the doldrums of my corporate 9 to 5), I often fall behind on my own obligations, such as finishing up The Sopranos reviews, or — even worse — rarely checking my Colin’s Review email.

But because the dream will always be to turn Colin’s Review into my full-time job, I figured I might as well work on turning that into a reality. To start: check my inbox for the first time in months (colinsreview1@gmail.com in case anyone was wondering).

Sifting through the spam, I was pleasantly surprised to see actual messages from actual people. In particular, two emails from Regas-McDonald, a self-described “avant-pop” duo based out of Cleveland, asking me to give their new LP (titled Hall of Fame Cities, to be released on Voltage Control Records on November 10, 2021) a listen.

First off, I would like to formally apologize to Sam Regas and Matt McDonald (the cousins behind Regas-McDonald) for not getting back to them sooner. As a music critic on the fringes of online obscurity, I have no business ghosting a rock band on the fringes of indie obscurity, and I want them to know that was never my intention in the first place.

For a band to personally reach out to me asking to review their new album — which hasn’t even been released yet! — is something I never considered possible after creating this website on a whim as a journalism undergrad. Hopefully this article will make up for my unavailability, and hopefully it’ll teach me the valuable lesson to check my Colin’s Review email on a daily basis.

Moreover, hopefully this will lend some further legitimacy to both Colin’s Review and Regas-McDonald alike. I encourage any and all musicians to reach out to me in the future.

And so, to the album at hand.

I already mentioned that Regas described the duo as avant-pop, which is certainly accurate. He also added a parenthetical: “or: baroque? psychedelic? cinematic pop?… who gives a shit,” which is also an accurate description of their music.

The experimental rockers have a kitchen-sink aesthetic, combining the aforementioned baroque psychedelia with electronic art rock, krautrock, dreamy indie pop, you name it. On Hall of Fame Cities, their sophomore LP, I hear traces of The Flaming Lips, They Might Be Giants, Animal Collective and The Unicorns, often all within the same song.

Of course, Regas-McDonald aren’t necessarily as good as any of those aforementioned icons, a fact which I’m sure they already know. Sometimes their experiments are inspired (the reverb-heavy mini-suite “Bridge and Canasta”); other times the experimentations go too far down the rabbit hole (the irritably atonal “Terribly American”). One thing that can’t be denied is Regas-McDonald’s total commitment to being weird, a cheerful attitude that permeates every song and comes across as truly genuine.

At only six songs, Hall of Fame Cities isn’t what I’d call an easy listen. Then again, neither was their debut, 2020’s Toward Void & Vistas, which I actually enjoyed more than the new one (reminds me of Royal Trux, which is indeed a compliment).

Nevertheless, the album closes with what is probably their most accessible — and best — song to date: a dreamy, three-minute acoustic ballad called “Windcandy Muse.” Stripped bare of trumpets, violins and pump organs, it’s a worthy finale that shows Regas-McDonald can be pop without the caveat of being “avant.”

Within the strictures of Colin’s Review, Hall of Fame Cities probably hovers around a B. Despite that, Regas-McDonald is still worth checking out. The album will be released on November 10th.

Once again, I’d like to thank them for taking the time to reach out to me, and I hope they’re proud of having the distinction of the first band to ever send me an advance copy of their work, which is something I won’t soon forget.

I also won’t soon forget to check my emails.

One thought on “Avant-Pop from Cleveland: Regas-McDonald’s New Album”