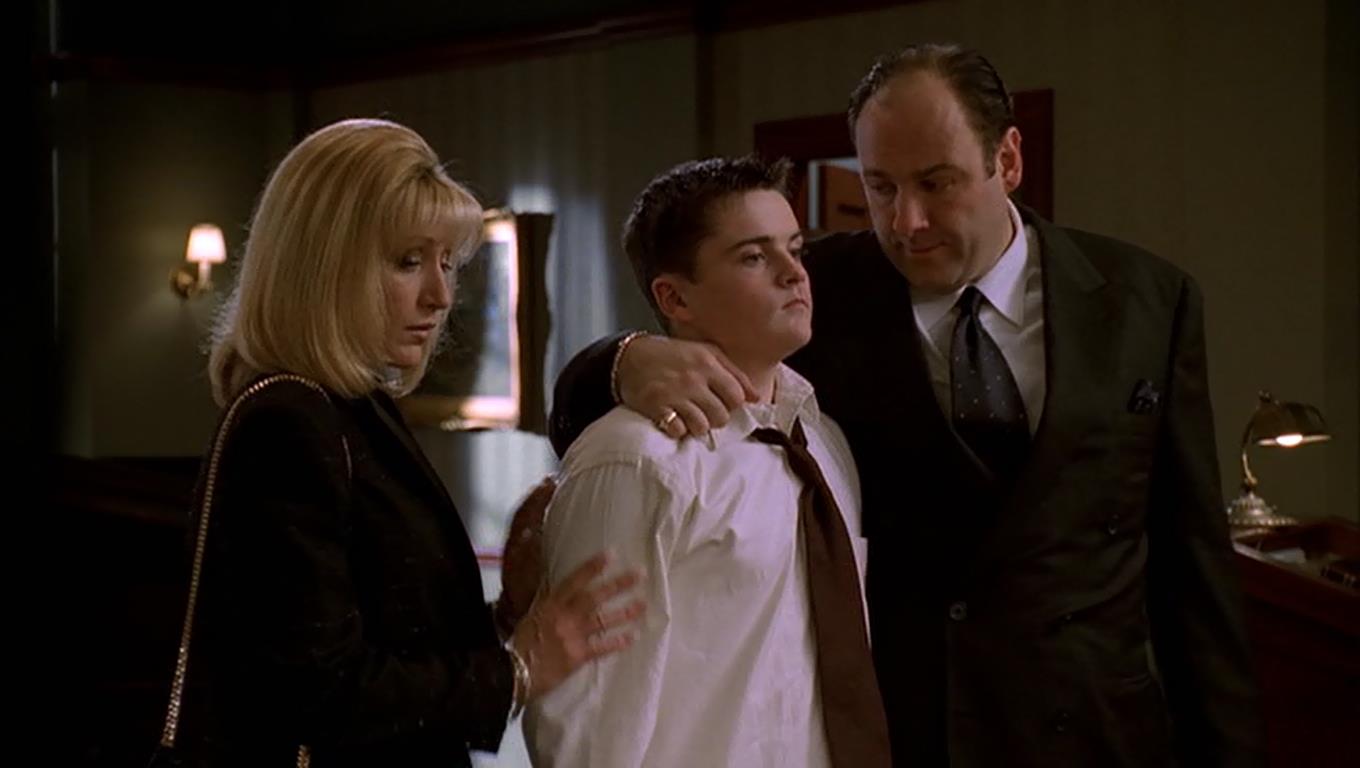 The Army of One: “Ungrateful Heart”

Ever since Tony saw those ducks in his swimming pool, The Sopranos has been — above all else — a show about family. That’s certainly the case in “The Army of One,” which almost completely dispenses with mafia-related activities to instead focus on Tony’s efforts to get his troubled son, AJ, into military school.

In fact, everything about the episode subverts expectations. Jackie Jr. is killed within the first 15 minutes, thus giving series creator David Chase ample time to explore what’s really on his mind: the Sopranos’ toxic influence.

Season one of The Sopranos ended at a family dinner; season two at a graduation party. Appropriately, season three finishes with a funeral. Yet “The Army of One” never wallows in depression. As a matter of fact, the episode is somewhat light and optimistic, surprising the viewer at every turn.

For example, the tragic fate of Jackie Jr. is counterbalanced with a lighthearted story about AJ Soprano. Through use of careful editing and subtle imagery, the two characters become inextricably linked, just like Meadow had been with Tracee in “University.” As a result, AJ getting expelled from school unexpectedly becomes one of season three’s most touching storylines.

We identify with Tony’s fear that Jackie Jr.’s fate will befall his own son if he doesn’t act fast. It’s evident that AJ needs to avoid the Soprano family business at all costs, and if sending him to the Hudson Military Institute will solve that problem, then so be it. Yet it also puts Tony’s terrible parenting skills on full display — in “The Army of One,” the mafia and the military are one and the same.

The ultimate irony is that AJ is saved by the one thing Tony desperately wants him to escape: his own cursed, Soprano DNA. After AJ suffers another panic attack, Tony realizes that he can’t send his son to military school, and that he’ll probably be doomed no matter what. For better or worse, AJ ends the episode by his parents’ side, standing silently at Jackie Jr.’s post-funeral family gathering.

“The Army of One” possesses a perfect balance of comedy and tragedy. The good-natured humor of the AJ storyline is directly contrasted with the emotional aftermath of Jackie Jr.’s death, which becomes even more powerful when viewed from the perspective of mobster outsiders like Meadow Soprano and Rosalie Aprile.

The “official” story is that Jackie was killed by unidentified black males in a drug deal gone wrong. Of course, Meadow knows this explanation is bullshit. She suggests as much in an argument with Carmela. Yet when Jackie’s teenage sister suggests the same thing, Meadow ends up defending the false narrative. She plays dumb, and suddenly becomes staunchly loyal to her family.

Her conflicted emotions come to a head when she gets drunk and sabotages the funeral after-party. Admittedly, it’s one of the few cringeworthy scenes in the series — dumb teenagers being dumb teenagers. She then runs off back to college, momentarily freed from the burden of being born into a mob family. Tony has no choice but to let her go.

For the first time ever, Meadow finally sees through the bullshit, yet it remains to be seen whether she’s even learned anything at all.

The main goal of “The Army of One” is to expose the superficiality of its characters. Look no further than Jackie Jr.’s funeral procession, in which the mobsters responsible for the kid’s death are too busy taking last-minute Super Bowl bets to even feign sympathy. When the feds crash the party, Silvio Dante and Chris Moltisanti take the opportunity to grandstand in the cemetery.

Yet in the episode’s final scene, David Chase exposes the superficiality of TV itself. At a family/famiglia gathering, the recently-exonerated Uncle Junior serenades the audience with an emotional rendition of “Core ‘ngrato,” an old Neopolitan ballad from the 1910s. Aside from a brief interruption by Meadow, the performance is beautiful enough to bring several characters to tears.

Just as the episode is about to conclude, however, a recording of a French ballad sung by Lucienne Boyer is superimposed upon the scene. The effect is quite jarring, as the camera continues to pan across Uncle Junior and the various onlookers entranced by the music. Two more smash cuts — one song in Chinese, and the other in Spanish — finish the season on quite a confusing note.

It’s a divisive and dissonant ending (perhaps foreshadowing an even more divisive and dissonant ending in the future), but it works within the context of Chase’s underlying cynicism. By breaking the fourth wall, the scene highlights the different ways that art can manipulate the emotions, and how music and television work hand-in-hand to provoke a preordained reaction. In the end, it ultimately doesn’t matter what language the lyrics are sung.

That’s also the reason why Aphex Twin’s “#8” plays over the end credits — an electronic instrumental lacking both lyrics and a proper title shouldn’t provoke any type of emotional reaction whatsoever. It can mean anything, but it can also mean nothing.

Peculiar ending aside, “The Army of One” is an effective albeit unexpected anticlimax. The stakes might seem small, but the spotlight on characters outside the series’ main orbit greatly expands the overall scope. It’s almost as if The Sopranos has become fully self-aware, passively observing itself with an omniscient shrug.

Now that season three is over, where do we go from here? Even though it was a most violent year full of doom and gloom, it seems to end with an optimistic tone. Or maybe that’s just how the music makes it appear. Given the show’s past history, pessimism seems to be the only option.

Whatever your takeaway might be, there’s no denying the fact that it remains the greatest show on TV. In the grand scheme of things, nothing much has changed.