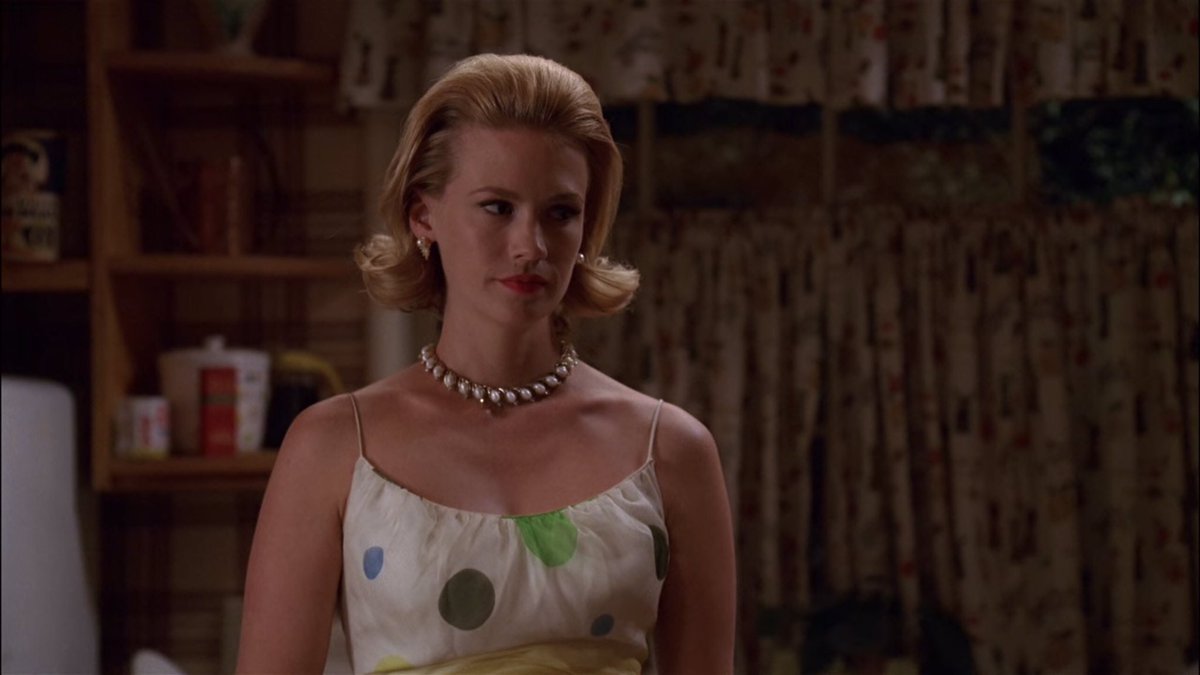 January Jones is a serviceable actress who possesses a limited range. In the right role, she’s perfect. For example, Betty Draper — a cool, icy, femme fatale — is the part she was born to play. Nevertheless, her emotionless demeanor can sometimes be too one-note.

In “A Night to Remember,” Betty confronts Don about his affair(s), and subsequently kicks him out of the house. It’s meant to be one of the most hotly-contested scenes in the entire series, yet Jones’ delivery is somewhat hollow and indifferent, and Betty appears childish as a result.

What should’ve been a climactic moment for her character ends up falling flat. I wasn’t supposed to come away from this argument siding with Don Draper.

Betty’s emotional resentment best manifests itself when she smashes a wooden chair in the dining room, or rides a horse with a look of frustrated determination. In other words, scenes where she doesn’t speak. It’s not a knock against Jones’ ability; it’s just that she’s noticeably outmatched when sharing the screen with Jon Hamm.

For these reasons and more, “A Night to Remember” is somewhat unmemorable. Even the sub-plots at Sterling Cooper — Joan Holloway helps out Harry Crane in the television department, Peggy Olson and Father Gill collaborate on an advertisement for the local church — are second-rate when compared to the more entertaining storylines featured in other episodes. Dare I say we need more Pete Campbell?

That being said, the episode still does a great job exploring the struggles that our Mad Men women face in their day-to-day lives. Joan excels in her temporary role as product-placement advisor (reading TV scripts to determine which commercials are suitable to air), and is disappointed when Harry hires someone else full-time. At home, her fiancé, Greg, doesn’t seem to care.

Meanwhile, Peggy finally gets the opportunity to write and pitch her own advertisement … it just so happens to be a flyer for a church youth dance … and she’s doing it on her own free time. Still, the scene where she answers the phone pretending to be her own secretary is humorous and heartwarming in all the right ways. Another minor victory for our favorite workaholic.

“A Night to Remember” is an installment that ultimately doesn’t live up to its full potential. The limited range of January Jones is certainly a valid reason, but the onus isn’t entirely on her — even if there had been better acting in her aforementioned argument with Don, the episode remains disjointed.

Luckily, the masterful ending sequence is a poignant return to form —Don heads to the kitchen for a late-night Heineken, the camera zooming out to reveal he’s sleeping at the office. It makes up for all the inconsistency that came before.

Plot-wise, we’ve reached a turning point in season two. Quality-wise, it’ll only go up from here. Even though Mad Men isn’t always perfect, low-stakes chapters like this help give the masterpieces more impact.