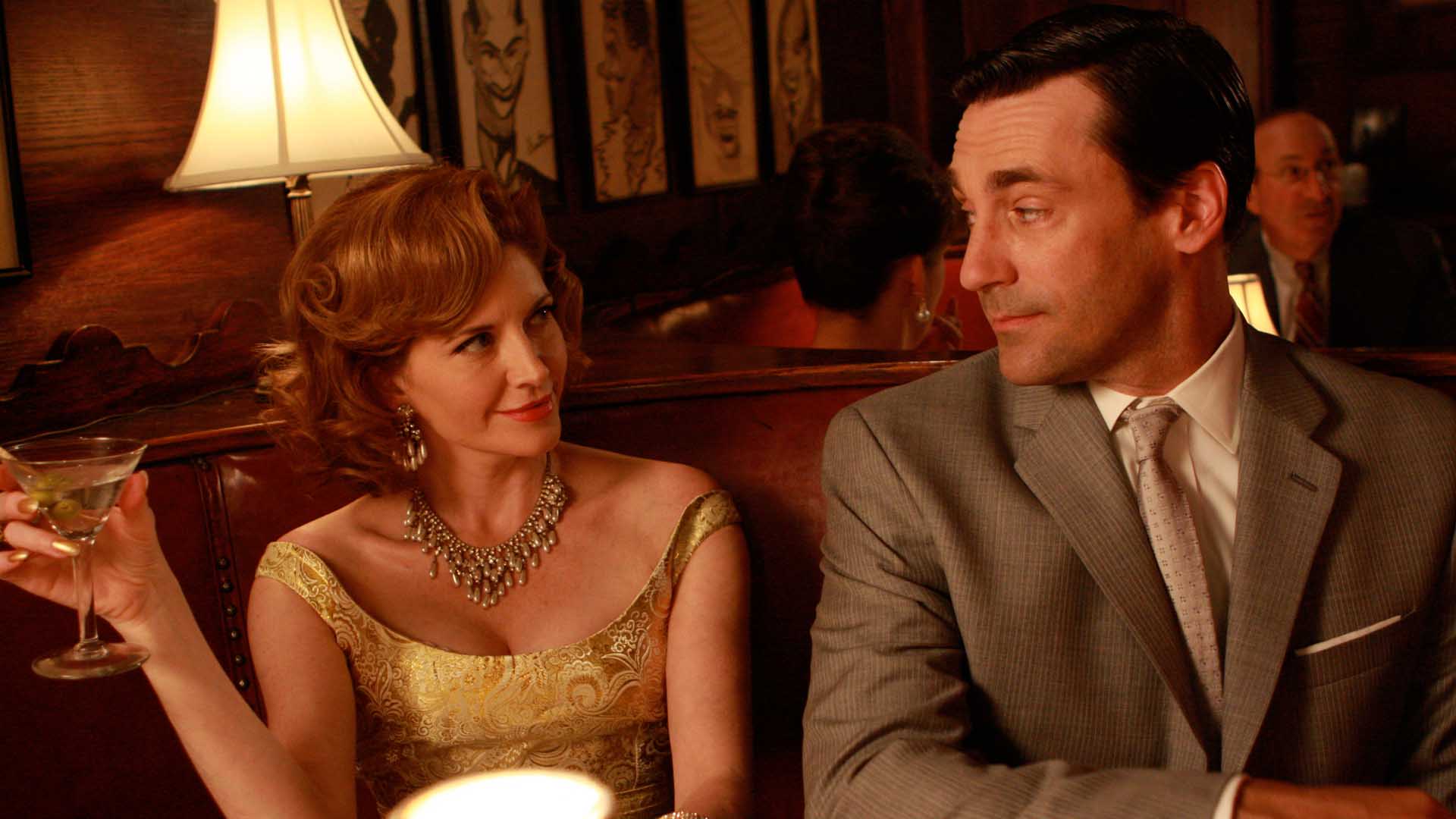 “Always Crashing in the Same Car”

Don Draper doesn’t really much care for Bobbie Barrett. She’s cold, calculated and conniving, and she’s married to one of his clients. But that doesn’t stop Don from sleeping with her anyways. He even takes her on an impromptu seaside getaway. But they never make it to the beach house, as an intoxicated Don crashes the car.

Mad Men doesn’t usually rely on plot twists, but this newest development is the closest we’ve come to an unexpected turn of events. All of a sudden, Don’s personal and professional lives are (once again) turned upside down. He ends up in the drunk tank without any cash, while Mrs. Barrett suffers a concussion and a bruised face. If anyone were to find out the truth, it would mean the end for both of them.

Perhaps the even bigger plot twist is that Peggy Olson is the one Don calls upon for aid.

Peggy is the only person whom Don entrusts in this situation. She bails him out of jail, and allows Bobbie to spend the night at her apartment. But why does she do it? At first, Peggy’s unfriendly demeanor seems unjustified. Sure, she’s covering up for her boss’ adulterous affairs, but does she have to be such a bitch about it? She even goes so far as to make me sympathize with Bobbie Barrett, which is something I never thought I’d say.

Despite sharing very little in common, Peggy and Bobbie share a remarkable onscreen chemistry. Eventually, they come to share a mutual respect. Both of them are strong-willed businesswomen trying to make it in a man’s world. And as someone who’s already found success, Bobbie is able to offer some encouraging advice — “You can’t be a man. Don’t even try. Be a woman. It’s powerful business when done correctly.”

Whatever her reason might be for helping Don get out of trouble, Peggy needs to stop viewing him as a boss, and instead view him as an equal. She starts off with a minor victory at the end of the episode: calling him “Don” instead of “Mr. Draper” for the first time all series.

But the real reason Peggy helps Don is for the same reason Don asked for Peggy’s help in the first place — they share a connection that goes far beyond boss/employee.

As someone who had already abandoned his previous life, Don understood Peggy’s situation better than anyone, and so he advised her to do the same — put the baby up for adoption, get back to her new job as a copywriter, don’t tell anyone, forget about it and move on. Which she did.

It’s a strikingly magnificent scene, made all the more impactful when we consider that this is Dick Whitman talking, not Donald Draper. Sometimes, leaving behind everything is the only way you can truly get ahead. As a result, the flashback makes us retroactively appreciate Peggy’s character even more. Everything she’s done this season — including her storyline in “Three Sundays,” the way she behaves toward Bobbie and every interaction she’s shared with Don — suddenly takes on a new meaning.

Then again, you can only sweep your mistakes under the rug for so long. Don conveniently forgot to mention the immense pain that comes with abandoning your past. Even though it might be out of sight, it’s not out of mind.

“The New Girl” director, Jennifer Getzinger, is one of the most talented women working in TV today, and her work on Mad Men has always highlighted the series’ refined elegance. Even in the face of ugly circumstances, her meticulously framed sequences bring out a cultivated sense of style, which comes across as scathingly ironic given the episode’s subject matter.

Take, for instance, the scene in which Rachel Katz née Menken happens upon Don and Bobbie eating lunch at a restaurant. The setting is high-class, and the conversation is polite, but the emotions between them are anything but. Without having to say much at all, Rachel coolly exposes Don’s fraudulence. She’s seen this song and dance before.

And then there’s the long car ride in the dark between Don and Bobbie, in which Getzinger takes influence from the Golden Age of Hollywood. Utilizing a faux-backdrop and faux-intellectual conversation (Don references the works of Michelangelo Antonioni), Getzinger turns a sophisticated scene into one undercut with tragedy … and that’s before Don drives off the road: Not only are Don and Bobbie terrible people who cheat on their spouses; they’re also completely incompatible with each other.

There are several characters throughout “The New Girl” that the title may refer to — Bobbie, Joan, Peggy, Betty, Rachel, etc. — but perhaps the most deserving is Getzinger herself. She shapes the episode into an instant classic, and will go on to direct some of the best installments of the series.

In an episode concerned with sweeping things under the rug, Getzinger makes sure that we don’t look away.