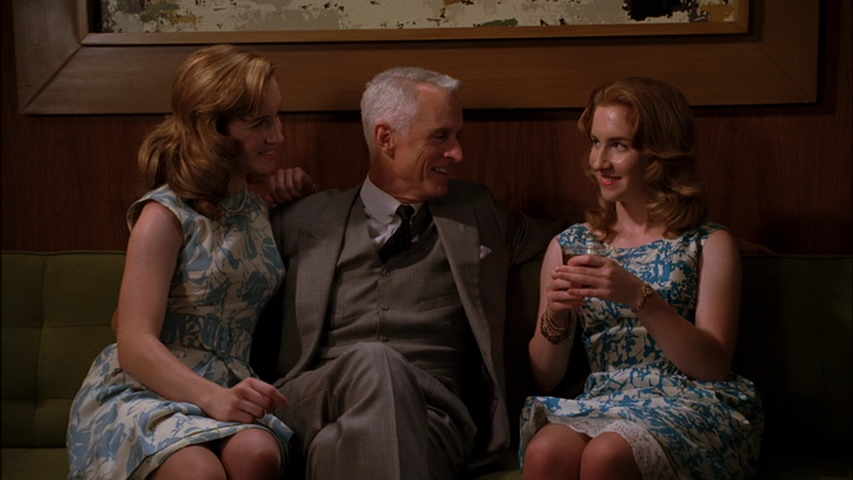 Donald Draper ends his Labor Day weekend in the lap of Rachel Menken, sorrowfully confessing the truth about his childhood — that he was the son of a prostitute who died during childbirth, that he was raised by his drunk father and abusive stepmother, how his father died after being kicked by a horse when Don was only 10, that he was then raised by his stepmother and her new husband, describing them as “two sorry people.”

Post-coital confessions aren’t usually this serious, but then again, this is Don Draper we’re talking about. It’s the first time in his life that he’s ever opened up to anyone about anything. The fact that it comes after sex only confirms that Rachel is the saving grace he needed.

But maybe the fact that he’s cheating on his wife (again) is more important. After all, not even Betty knows the truth about Dick Whitman. And she’s had kids with the guy.

A “Long Weekend” at Sterling Cooper can only mean two things — fucking and seduction, not necessarily in that order. Peggy and Pete find themselves unable to keep their secret romance civil, while Joan Holloway spurns the advances of both Roger Sterling and, in an unexpected turn of events, her bisexual roommate.

To cope with the loss, Roger heads down to the casting department, picks up a set of twins and, with Don as his reluctant wingman, invites them to spend the evening on the casting couch. The whole situation is as uncomfortable as it sounds, but it’s only made worse when Roger suffers a heart attack during sex.

Unlike most modern-day TV dramas, the characters of Mad Men aren’t typically at risk of dying. That’s probably why they live so easily with the consequences of their decisions. Nevertheless, Roger’s health scare causes several characters to contemplate their own mortality. For Joan, that means not wasting her youth on age. For Don, that means showing up at Rachel’s doorstep before it’s too late.

As for Roger, he gains a newfound appreciation for his wife. And, well, he learns a valuable lesson for next time: don’t do it twice.

When the series began, Don was already in the middle of an affair with Midge Daniels. He first met Rachel in the pilot episode, and now that we’ve seen their entire courtship, we know that they make a perfect match. Likewise, the two of them both know what they’re getting into. Even though Don’s married, he’s never felt a connection like this before.

It’s one of the best Mad Men moments so far, and certainly the most honest. Why is Donald Draper the way he is? Because he’s the bastard son of a whore, that’s why.