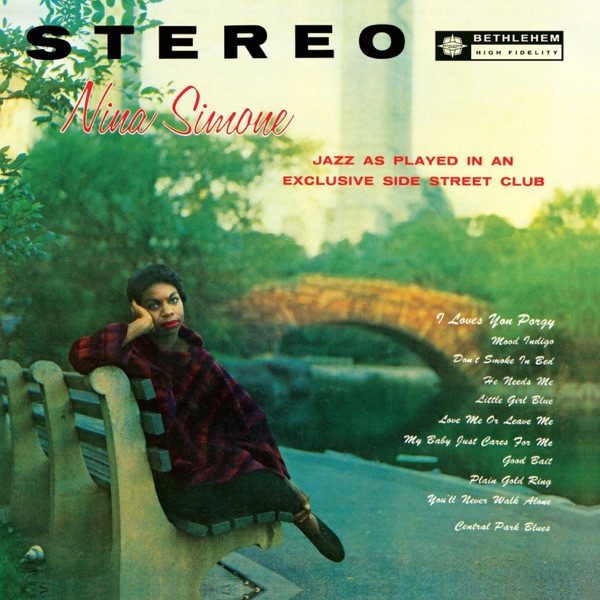 As the 1950s turned to the 1960s, the genre of swingin’ pop was dying out. Billie Holiday was dead. Frank Sinatra’s time with Capitol Records was almost over. Singers like Julie London, Dinah Washington and Peggy Lee were past their prime. In a generalized statement, the last vestiges of vocal jazz consisted of the Ray Conniff Singers and the occasional Sarah Vaughan flash-in-the-pan.

Her debut LP, Little Girl Blue (subtitled Jazz as Played in an Exclusive Side Street Club), was full of old-school jazz tradition and new-school innovation. Possessing the most expressive contralto since Billie Holiday herself, Simone masters any tune that comes her way. She doesn’t over-emote like Sarah, nor does she possess the seductive power of Ella; rather, her deep, wispy voice empowers every song with subdued ambiguity.

Simone’s voice is a perfect match for the melancholy nature of her selections — “Mood Indigo” puts particular emphasis on the line “I could lay me down and die”; the slightly chauvinistic “He Needs Me” becomes ironic; and even the show-stopping “I Loves You, Porgy” seems more influenced by Richard Wagner’s “Liebestod” rather than George Gershwin’s Porgy and Bess.

But the most important aspect of Nina Simone’s artistry is her music; namely, her contrapuntal piano style. Utilizing Evans-inspired block chord techniques and Garner-influenced tonal swells, her piano playing is just as significant as her voice, if not more so. Nowhere is this more evident than on the instrumental “You’ll Never Walk Alone,” which evolves from a solemn ballad to a cathartic release of incalculable emotion.

Simone’s musical ambition clearly separates her from her swinging contemporaries. Taking equal influence from jazz, folk, blues and gospel spirituals, she represented a bold new vision of female singer/songwriters. Even at this early stage in her career, Little Girl Blue clearly foreshadows the landmark innovations of Pastel Blues and Wild Is the Wind. It’s a fantastic debut.