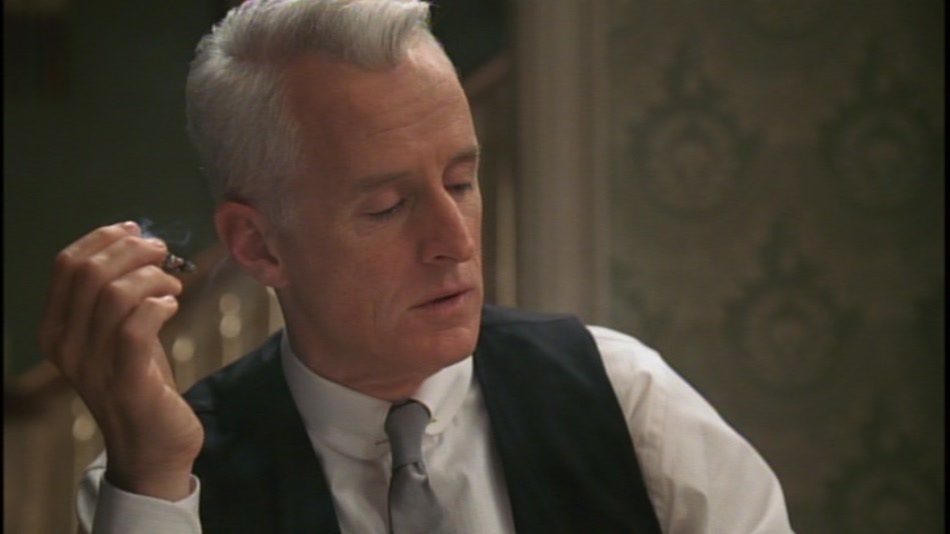 Mad Men bridges the end of one era with the beginning of another. The fact that the series feels so relevant from a 21st century viewpoint only adds to its overall timelessness.

With season one set in 1960, cultural revolution was right around the corner, yet the shadow of the “fabulous ‘50s” still loomed large. This was back when America Was Great™, so they say. But not everyone saw it that way.

“Red in the Face” pits the Silent Generation against the Greatest Generation in the form of Donald Draper versus his boss, Roger Sterling.

After all, everybody’s generation is the greatest if they’re the one being asked.

The episode focuses on Roger’s point-of-view for the first act before shifting to Don’s by the end. The transition is seamless.

Roger, who is jealous over the fact that young girls in the bar would rather flirt with Don over him, is feeling his age. To make matters worse, Don’s rising star in the agency seems to be burning brighter by the day. Throughout the series, there will be several occasions in which characters bluntly ask him, “What exactly do you do here, again?”

Inviting himself over to the Draper residence for dinner, Roger gets drunk, and makes an aggressive pass at Betty. He takes a bottle of vodka for the road.

Directed by Tim Hunter, whose other television work includes Twin Peaks, Deadwood, Breaking Bad, Hannibal and Bosch, “Red in the Face” has an enduring quality even though the storyline seems to go by in fast motion. Much of that has to do with how effortlessly Hunter is able to capture the wide confluence of emotions that the characters display.

Last episode gave us our first insight into Roger’s character, but “Red in the Face” is the first time he’s given a real spotlight. It succeeds because John Slattery delivers an excellent and underrated performance, imbibing Mr. Sterling with a casual, charismatic and comfortable whogivesafuck attitude. He never regrets what he says, and he’s entertaining in whatever he does. If nothing else, he’s Mad Men’s greatest source of humor. And that’s why he’ll soon become one of the series’ most endearing characters.

Perhaps he says it best in his half-assed apology: “When a man gets to the point where his name is on the building, he can get an unnatural sense of entitlement.”

Don, on the other hand, isn’t going to let himself be outgunned by a silver fox who won’t accept that his best days are behind him. The morning before an important meeting with the Richard Nixon presidential campaign, Don takes Roger out to lunch for all-you-can-eat oysters and all-you-can-drink martinis. He also bribes the elevator operator to say it’s out of order upon their return.

23 flights of stairs later, Roger pukes all over the Sterling Cooper lobby floor. Don gives him a pat on the back: “Are you alright?”

While Don and Roger spend the episode big-dicking each other, the rest of the characters go about their daily struggles. For example, Pete Campbell goes on an unlikely odyssey trying to return a Chip-n-Dip that was gifted to him as a wedding present. He buys a rifle with the store credit, which later puts him in the doghouse with Trudy.

Meanwhile, Betty is also having marital problems of her own, stemming from her increasing isolation. She feels lost in the supermarket, giving divorcée Helen Bishop a well-deserved slap in the face. She’s also taken to drinking wine in the daytime.

While her storyline may seem dull to the untrained eye, her plight is getting more sympathetic by the day. Sure, Don is charismatic, but is he not one of the shittiest TV husbands of all time? He’s currently juggling three different lovers, and has the nerve to blame Betty when Roger flirts with her.

All in all, Mad Men is settling into a formula unlike anything ever seen in television history. The ability to turn these happenstance inconsequentialities into highly entertaining eccentricities is truly a remarkable accomplishment.

Old man eats oysters and vomits on office floor? Depressed wife slaps a bitch in the vegetable aisle?? Even though the stories’ appear uninteresting on the surface, they are enthralling and captivating and extremely relatable for anyone who has … well … to put it simply, anyone who has lived life.