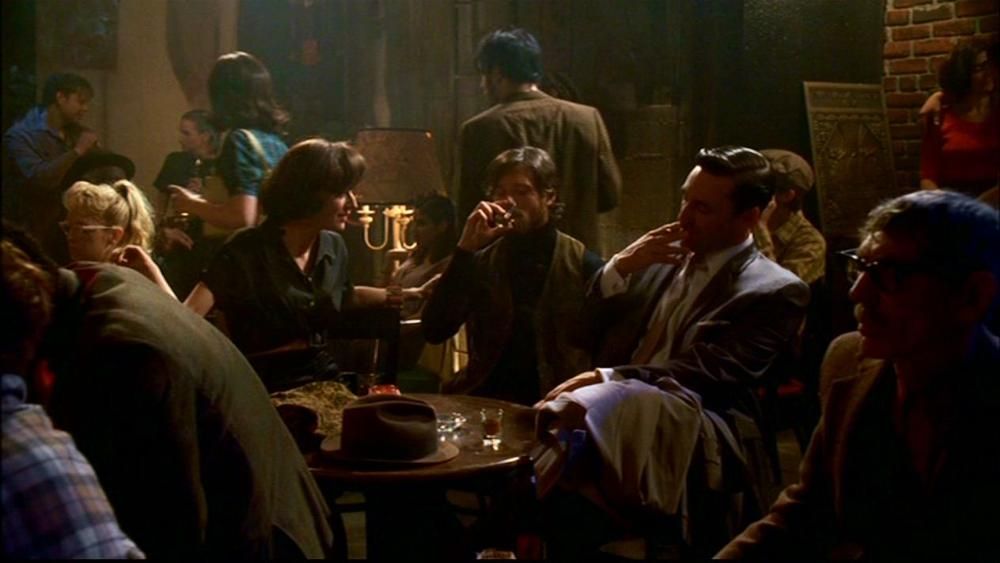 Babylon” picks up right where the momentous “5G” left off — revisiting the unlikely circumstances of Donald Draper’s past. He falls down the stairs in 1960 and suddenly flashes back to a scene from 1936, watching the birth of Adam as real as if it were happening right there in the kitchen.

The fact that Don can have these sorts of “visions” is a compelling caveat, but the visions themselves are the real miracle. As will become clear in later episodes, Mad Men can do Depression-era ‘30s just as well as Madison Avenue ‘60s. The execution is flawless.

When shows stray out of their comfort zone, they tend to struggle. Mad Men, on the other hand, always seems comfortable no matter the setting.

The flashback lasts only a short minute before “Babylon” gets focused on its main agenda — fucking and seduction. Not necessarily in that order.

Don gives Betty some of that Mother’s Day lovin’, and later goes out to lunch with Rachel Menken, the department store owner who had previously spurned him. They keep their date professional, as Don is having problems with an Israeli ad campaign and seeks her advice, but Rachel can’t deny her true feelings. She’s fallen head over heels.

Meanwhile, Don continues his steamy affair with mistress Midge Daniels, the pot-smoking proto-hippie. Things get complicated when one of her beatnik friends shows up, and Don reluctantly joins them in Greenwich Village. I’m surprised they didn’t run into Llewyn Davis.

Betty, Midge and Rachel all satisfy different sides of Donald Draper’s selfish desires. However, “Babylon” shows the man to be nothing more than a serial womanizer. And a bit of a sociopath.

Betty represents the perfect, storybook marriage. On the exterior, she and Don are living the dream, but the superficiality of their lifestyle is becoming clearer by the day. Betty suffers from depression, even when pillow-talking.

On the other hand, Midge only serves one purpose: an outlet for Don to stick his Dick Whitman in. Sure, she’s cool and free-spirited, but she’s by far the series’ most ineffective character. Midge is out of place, and Don knows it.

Don also knows that Rachel Menken — the smart, sophisticated Jewish girl — is the only one who can offer him true love. Rachel represents salvation, the chance to right all wrongs.

Surprisingly, the episode’s most torrid affair belongs to Roger Sterling and Joan Holloway. Roger is like an older version of Don — another suave, filthy-rich advertising executive who cheats on his wife. On the other hand, Joan is a much more complicated and independent character than she appears.

As a matter of fact, all of the the female characters in Mad Men are much more complicated and independent than they appear. Nowhere is this more obvious than with Peggy Olson.

The Sterling Cooper secretaries all take part in a blind lipstick test, but Ms. Olson is the only one who isn’t fawning over the free product. “I don’t want to feel like one of a hundred colors in a box,” she tells senior copywriter Freddy Rumsen. She then refers to the tissues in the garbage can as “a basket of kisses.” By the end of the day, she’s working as a copywriter for the Belle Jolie account.

While all the other characters are working to find love, Peggy’s only love is work. Advertising is her passion, which is actually quite inspiring. For as much as Mad Men is a show about relationships, it’s also about the ambitions of big business. Peggy has her eyes set straight on the top; relationships be damned.

The episode’s ending is surprisingly disappointing. At the Gaslight Café, a folk group plays “Psalm 137” (which features the lyrics that give the episode it’s namesake, “By the rivers of Babylon”). The performance is then set over a montage of Roger, Joan and Don, who are all involved in (multiple) extramarital affairs.

Despite the obvious emotional magnitude, the whole scene felt forced. And I didn’t really like the song, either.

Plot-wise, “Babylon” is about as interesting as “Ladies’ Room.” But already the execution is so much better. Even though this is only a minor installment, Mad Men is now operating as a well-oiled machine, hinting at greater things to come.