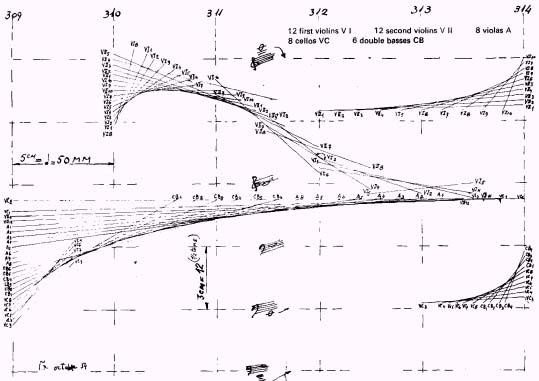 Aside from John Cage’s “4’33,” Pierre Boulez’s “Le Marteau sans Maître” was the most talked-about premiere of the decade. It showed that high modernism could indeed be “popular,” and that classical music in general could still drive the musical conversation. That being said, it’s far from the best composition of the year.

A “sound mass” composition from the original Greek Freak, Metastaseis is a marvel of deconstruction. Massive drones ebb and flow like the world is collapsing in on itself, while a slight serial row provides the smallest hint of melody. Iannis Xenakis uses both architectural and mathematical principles to create a sound out of time — for roughly 8 minutes, Metastaseis is all there is and ever will be.

A symphonic concerto in four parts, with each movement containing its own identity, Shostakovich’s first violin concerto is a distinctive addition to the repertoire. Most notable is the diabolic “Scherzo,” a true danse macabre if ever I’ve heard one. There’s also the stirring “Passacaglia,” a stark contrast that finds the featured soloist climbing a stairway to heaven.

Atonal and dissonant, yet remarkably restrained, it’s no wonder that Toch’s Third Symphony won the 1956 Pulitzer Prize. He’s in total command of the symphonic form. The composer perfectly blends elements of modernism and contemporary neoclassicism into a work that is both artful and playful. Bonus points for featuring organ and a CO2 noise machine.

Not as “mysterious” as it should have been. Not as long either. If all you want is a Ralph Vaughan Williams tribute, then you’ll like what you hear.

Apparently the initial premiere received such a tepid response that the conductor addressed the audience and said, “This work is Enescu’s masterpiece, it is more difficult to grasp because of its advanced language, therefore we shall play it again in its entirety.” Pretty pretentious if you ask me. An encore doesn’t mean play the whole damn thing over again.

After an initial listen left me similarly tepid, I decided to give George Enescu’s Chamber Symphony a second chance. After all, the piece’s reputation has been held in high esteem ever since that subsequent performance. Might I be similarly swayed?

Come to find out I did enjoy the piece’s intricacies much more the second and third (and fourth) time around, but it still didn’t do much to increase my appreciation for Enescu’s overall body of work as a whole. The symphony’s best melody is the first, which is never a good sign. As far as swan songs go, however, the 73-year-old Enescu could have done a lot worse.

My initial notes: “The exotic instrumentation is certainly intriguing, as is the erratic structure. Still, Le Marteau sans Maître feels like an exercise in theoretical pointlessness. It isn’t until the gong sounds off in the final movement that there is any trace of melodicism. That’s probably the whole point, but still…”

After having given both the 1973 and 2005 Boulez-conducted recordings of the piece multiple run-throughs, and having studied up on the surreal poetry of René Char, it’s safe to say that my initial opinion has largely remained the same: Le Marteau Sans Maître is largely impenetrable.

I’ll admit, the compositional skill is uncanny, as are the various combinations of instruments, but just because “surreal” is close to “serial” doesn’t mean that the former goes hand-in-hand with the latter. If anything, Char’s poetry is better appreciated on its own terms rather than via sprechgesang. Likewise, Boulez’s music proves he is a far better conductor than composer. You can’t have a hammer without a master and expect to hit the nail on the head.