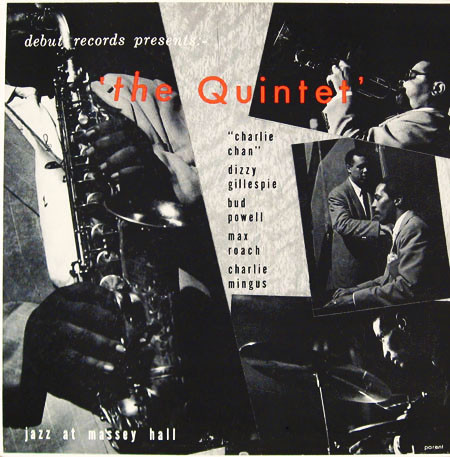 May 15, 1953. Toronto. Charlie Parker, Dizzy Gillespie, Charles Mingus, Bud Powell and Max Roach. The Quintet. The greatest one-off collective ever assembled gave one of the greatest concerts ever performed. A historical occurrence.

I rarely give live albums the credit they deserve. Of the few live CDs that I own, Live/Dead is the only one that I (rarely) listen to. But live jazz is a far different animal than live rock ‘n’ roll, especially when it comes to the older stuff. Jazz at Massey Hall is a watershed moment not just for bebop but for the entirety of jazz itself. Every solo — and there’s a bunch — is a victory lap of artistic triumph; the musicians tapping into an extraordinary collaborative ethos that transcends even the greatest of bands.

The live improvisation also lends itself to the audience — they applaud at the appropriate times, providing a stand-in for us the listener. This is an album in which it is completely acceptable to ooh and aah out loud (at least 2 times per song). The fact that the Massey Hall attendants are there to share the experience with us — or is it we with them? — makes it even more special.

Above all, this record is entertaining as hell, which should be a requirement for all live LPs. I am in awe of the one-two punch of Bird-&-Diz on “Perdido,” and then I’m cracking up over the comic vocals of “Salt Peanuts” (verbatim: “salt peanuts/salt peanuts”). Even though the formula is largely the same — main theme/Bird solo/Diz solo/Bud solo/Mingus or Max outro/main theme recapitulation — our attention never wavers. The spirit of the performance enraptures and holds us, not letting go and maintaining a keen sense of being star-struck. Kinda the same way the aforementioned Grateful Dead tape makes me feel. You can just tell you’re listening to something important.

If I had to choose an MVP for the concert as a whole it would have to be Parker, if only because he typically leads things off, giving each song a fitting first impression. This would be his final collaboration with Gillespie, who matches Bird note-for-note in playful intensity. Just like on the 1952 Bird & Diz LP, their legendary interplay is the music’s defining trait.

Elsewhere, the rhythm section of Mingus and Roach — another ultimate jazzman’s-jazzmen pairing — provide the sinewy undercurrent upon which everything sits comfortably. And Bud Powell does Bud Powell things, though not Amazing Bud Powell things.

The Quintet’s performance is among the most significant musical moments of the 20th century. An espresso shot of primo hipster jazz, or in other words, a damn fine serving of bop. Tastes even better than the salt peanuts contained within.

Jazz at Massey Hall – The Quintet