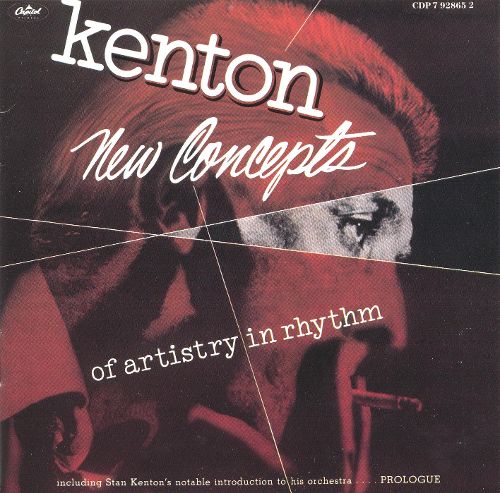 Put-it-on-a-Playlist: “This is an Orchestra,” “Lonesome Train”

Following the highly experimental City of Glass, Stan Kenton took a necessary step backward, rightfully deciding to rein in his more serialist influences. What resulted was an artistically abundant year for his new-and-improved Orchestra — four essential LPs that earn Kenton his stature as a trailblazing jazz innovator.

Of the four albums released in 1953, New Concepts of Artistry in Rhythm is the best, featuring the most confident and assured conducting of his career. Just listen to the opening prelude, “This is an Orchestra,” a formal introduction to the Kenton philosophy as voiced by Kenton himself. In truth, I don’t know whether I love or hate the piece — it is both pretentiously overbearing and sardonically humorous, with Kenton’s dry remarks and exquisite vocabulary serving up both thrills and chills. The climax, which takes a while to reach, is volcanic, making it all worthwhile, I guess.

The rest of the album is a hard-swinging jamboree, highlighted by solos from Maynard Ferguson and Lee Konitz. And though it bears more in common with traditional big band than Kenton’s earlier LPs, New Concepts is still a very avant-garde affair. Atonal melodies and dissonant harmonies clash in every composition, occasionally moving from fringe to full-blown at the drop of a hat. “Lonesome Train,” a June Christy vocal, is a surreal ballad-gone-wrong — cool jazz with a sense of dread.

The fact remains that I want to like Kenton more than I actually do. I greatly appreciate his eccentric leftism yet I do not cherish it. I’ve always found his work to be somewhat cold and distant, June Christy notwithstanding. Nevertheless, New Concepts is the most upbeat and welcoming album of the entire Kenton catalogue.

3 thoughts on “New Concepts of Artistry in Rhythm – Stan Kenton”