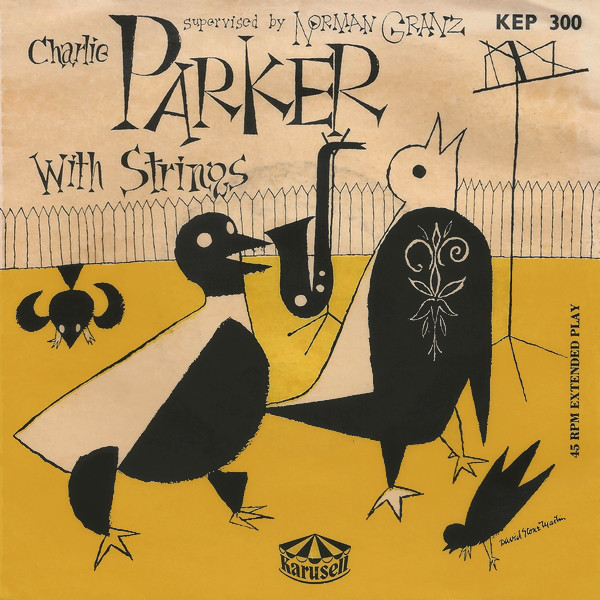 Put-it-on-a-Playlist: “Just Friends,” “Everything Happens to Me,” “Summertime,” “If I Should Lose You,” “Laura”

Bird had always held an interest in classical music, particularly the innovations of Igor Stravinsky.  It was a longtime desire of his to record in an orchestral setting, and it took “the most successful impresario in the history of jazz,” Norman Granz, to make it happen.  Six recordings were laid down on Nov. 30, 1949, and were later released as a 10” LP in 1950.  The commercial success of this release led to a second Charlie Parker with Strings 10”, this time culled from a July 1950 session.

To this day, Charlie Parker with Strings remains the best “album” of Parker’s career.  The victim of circumstance—heroin addiction and the pre-LP 1940s—Parker never had the opportunity to record many long-players.  As such, Parker with Strings and Jazz at Massey Hall (1953) are perhaps the only definitive collections released during his lifetime.

The six songs from the original 1949 session have a timeless quality.  The first jazzman to ever record with a string ensemble, Parker’s performance here seamlessly bridges genres and cultures—jazz mixes with elements of classical, ushering in a new decade of improvisation while not being tied down to any specific timeline.

Parker with Strings is so much more advanced than any jazz recording of the era because it taps into classicism’s elusive “music of the spheres” aesthetic.  The opening impressionistic flourish of “Just Friends,” the bluesy pentatonic of “Summertime,” the neo-classicist oboe in “I Didn’t Know What Time It Was” and the Hollywood romanticism of “If I Should Lose You”— the philharmonic conveys a sense of collective emotion not typically found in bop’s individualist pursuits.

The July 1950 session features an even greater emphasis on the orchestra (five violinists as opposed to three), and the overall vibe leans much closer to Third Stream.  “Laura,” in particular, is in fact led by the orchestra – it is one of the greatest songs in Parker’s catalogue.

Nevertheless, the entire concept is jazz all the way. The inimitable presence of Buddy Rich assures us that the band, not the orchestra, is the one calling the shots.

Disregarding all notions of theory and classification, I find that Charlie Parker with Strings is still one of the freshest jazz recordings of all time.  It is defiantly modern but extremely contemporary, and even from a retrospective standpoint, it doesn’t need gimmick or nostalgia to get by.

When I listen to records of the era, much of my joy is attributed to the “old-timey” factor.  Charlie Parker with Strings relies on no such thing — it succeeds on the age-old pop principle of pleasing melodies and subtle chord changes.  And, like any good purveyors of pop, Parker and Granz know exactly how to begin and end a tune.  Many of each individual song’s finest moments are found in a ten-second range at the start and finish—they hook us right away and then leave us wanting more.

There were very few “albums” released in 1950, but Charlie Parker with Strings is unquestionably the best.  Not only that, but it is a collection that stands among the most important jazz music of all time.