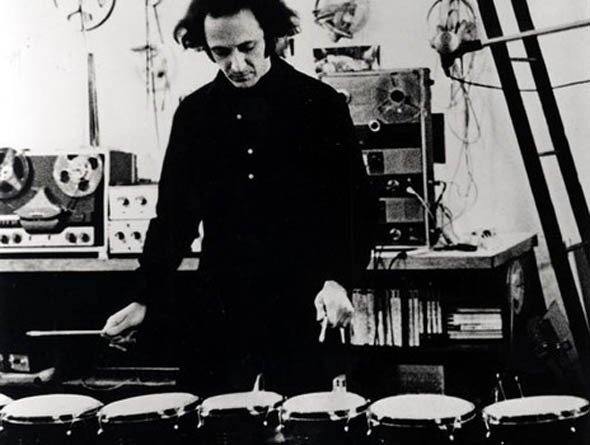 Part of a continuing installment on Minimalism, in which I take a listen through the history of postmodern classical’s most influential movement.

The immediate post-war period was over; a modernization of culture had begun.  Total serialism and tone clusters no longer holding sway, the next evolution for avant-garde classical music was to turn inward.  Back to the basics.  Minimalism.

Steve Reich’s Music for 18 Musicians (1978) is the absolute peak of minimalism—an hour-long, ambient trance that elevates the listener to a higher being.  To my ears, it contends with The Rite of Spring as Greatest Classical Work of the 20th Century.  The man is a genius, pure and simple.

But, Music for 18 Musicians is far more advanced and accessible than minimalism’s murky beginnings in the 1960s.  Reich, along with Terry Riley, Philip Glass and La Monte Young, experimented with music that moved at a snail’s pace; exploring the very nature of song and sound through drone and repetition.

Before he began working with orchestras, Reich’s forte was phasing—repeated, looped patterns that gradually shift in and out of unison.  With this, Reich was able to explore the very nature of rhythm and melody down to its bare bones.  Spoken word or instrumental samples are piled atop each other until they are indistinguishable from the original, creating a symphony of impenetrable and undeniable sound.

The importance of these techniques has been influential beyond belief, but do they still stand up today as enjoyable works of art? That is, can they still be listened to, first and foremost, as music?  After all, music is for the makers, not the philosophers—which is why rock and roll was getting pretty popular around this time.

It pleases me to report that Steve Reich’s early works still contain their original, revolutionary fire.  The great thing about minimalism is that everything is clear-cut and precise—the vision of the composer is not hidden; the roots of Music for 18 Musicians are plain to see in Come Out.  These primitive compositions are postmodern avant-garde at its finest—akin to the greatness behind Yves Klein’s IKB 191 or Kenneth Noland’s Bridge.

Here are my reviews.

A mad black preacher raves about the end of the world.  Lo-fi street recordings in the background, the sound of pigeons flying off is even audible.  Then, like a CD skipping, the phrase “it’s gonna rain” is frantically stunted and replayed over and over and over again.  It becomes warped and looped almost beyond recognition.  “Part 1” gets by because of the idea behind it—it’s kind of like repeating the word “wire,” or any random word, over and over again until it loses all meaning, until it becomes absurd.  It’s gonna rain, it always has and it always will.

“Part 2” gets by because it switches up the pattern, only this time it maintains interest easier because the new pattern has more words.  Simple as that.  More words and more tape manipulations, which means a little more bounce and rhythm, as music tends to go.  A little more noise, too—by the end, the recurring motif has been transformed into lo-fi scuzz.

It was a highly influential and groundbreaking piece, the philosophy of a new movement bottled up into proto-hip-hop sample-splicing.  But DJ Reich is only getting started, still learning the ins and outs.  This isn’t essential by any means, only for fans of Reich and minimalism, but since I am a fan of both, I can’t deny a good lark when I hear one.

The voice begins, a black kid’s voice, 19-year-old Daniel Hamm, a member of the Harlem Six: “I had to, like, open the bruise up, and let some of the bruise blood come out to show them.”  The phrase repeats.  It’s a call to arms, civil rights and fuck tha police.  However, the fragmented “Come out to show them”—which is soon the only thing being repeated, ad infinitum—is as mysterious and intriguing a phrase as ever there was.

Because of its strangeness, “come out to show them” rolls off the tongue and blankets the ears beautifully—much like the phrase “cellar door,” according to Donnie Darko.  A lot of that has to do with the soft-spoken voice, a pleasant contrast when compared to the mad preacher of It’s Gonna Rain.  It’s poetic, really.  Once the phase shifting begins and the two original loops are doubled, “come out to show them” becomes its own melody, its own rhythm, its own music.

I give credit to Wikipedia here: the widening discrepancies between the repeated loops first produce a reverberation, and, later, almost a canon.  After all, this is still classical music, in case you’ve forgotten.  Canon in D, anyone?

Reich has perfected early minimalism’s main goal with this piece: marking the transformation from sound to music.  Like the best of the genre, Come Out is easy to lose yourself in.  But, this is not ambient, by any means; this is process music.  Eventually, the piece almost becomes ocean (to quote a more recent, post-minimalist work) and soon there is nothing left but whirring noise.  A confidently, inglourious end.

Captain Beefheart quotes it in on Trout Mask Replica, but Come Out was the 1960s’ original My Avant-Garde Gets Me Blues.  Certainly, the best of Reich’s early years and probably his second greatest composition overall.

OK, so Reich is starting to experiment with actual melody now, along with actual instruments.  The magnetic tape stays, though.  Reed Phase calls for soprano saxophone and circular breathing, but it doesn’t have the same touch as Reich’s previous works.  It’s just a phase.

Reich tries out his phasing techniques with live instruments—in this case, two pianos.  It’s a success, providing the building blocks for a piece like Music for 18 Musicians.  It wears out its welcome—one melody, two pianos, twenty minutes—but it provides some noteworthy insight into the very nature of melody.  Even though the same notes remain constant, new melodies are created at the tip of a hat, the flip of a coin, the tempi shift of a phase.  From nothing comes something, and from something comes anything and everything.

This one’s a little safer for all my ambient friends; at times, it sounds like it’s raining pianos outside, which is the piece’s greatest accomplishment.  A true oxymoron, this work was a huge step in the advancement of minimalism past its primitive stages.

Through repetition comes power.  I’m a big fan of Swans and E2-E4.  Piano Phase is a monotonous miracle cure.  It also has a good ending—concluding loudly with one piano, a confident declaration of purpose.  Good luck trying to play it solo.

Reich touches base with his classical roots thanks to the instrument choice here.  I’ll tell you right now, I prefer violin concertos to piano concertos, and this is somewhat a phase-shifting minimalist version of that.  Good melody, good spatial acoustics, good emotionless undercurrents.  Passes the test for me, but, unlike Piano Phase, I wish it could have gone on longer.

To throw my hat in the ring, I will personally commission ($200) any composer to blend Reich’s early style with my all-time favorite instrument: Pedal Steel Guitar Phase.  Make it happen.

We all need a good joke once in a while, and what better joke than a symphony for microphones? Four mics are hung from cables, dangling over speakers, four people each grab one, step about four feet back, release and let gravity do the rest.  A feedback loop is created when the mics pass over the speakers and it slows down as the pendulums swing.  At the end, the performers come in and pull the plugs.

A good piece of performance art, and another sly twisting of “found sound” into “music.”  And, yes, I’m wondering just as much as you are: did Vince Staples sample this for “Norf Norf?”