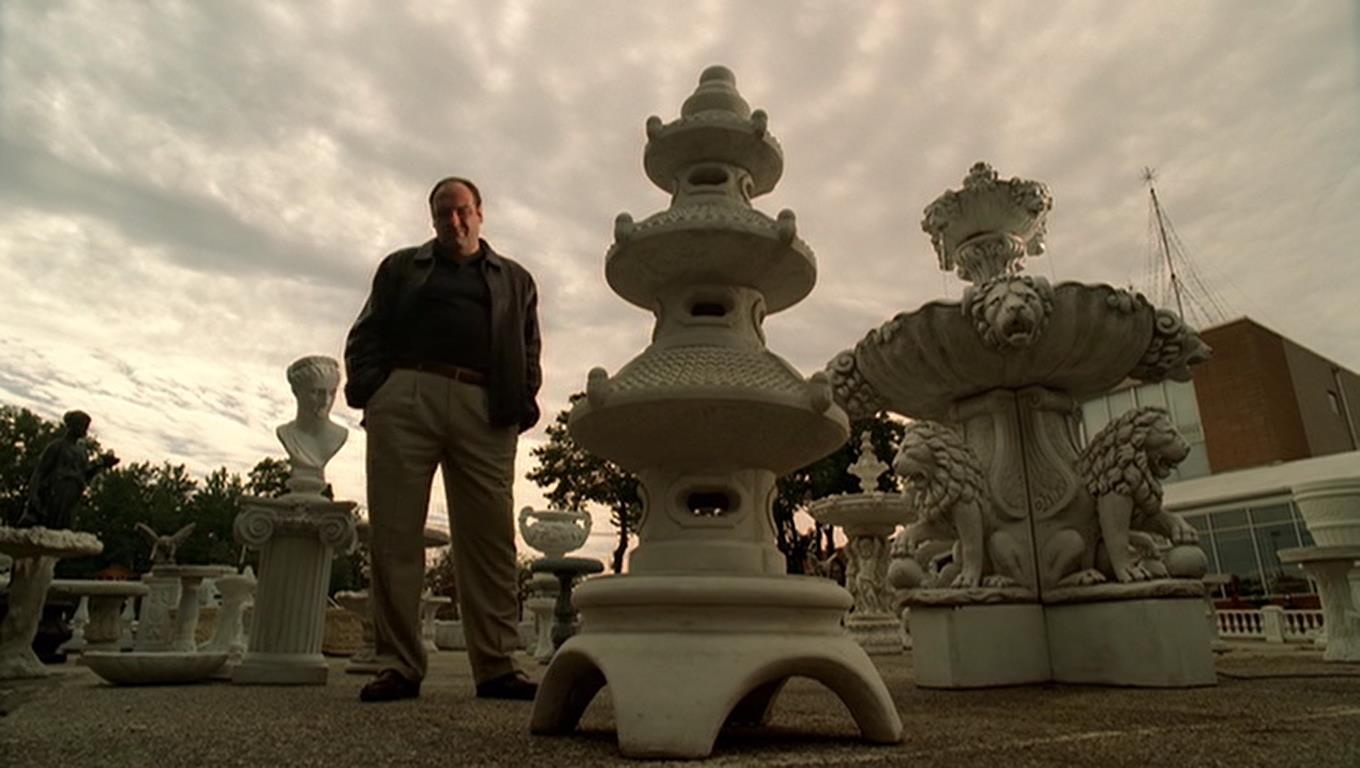 Another Toothpick: “Cancer vs. the Mafia”

Season three of The Sopranos weaves a tapestry with each episode. “Another Toothpick” isn’t where the season picks up in terms of action, but I do believe it starts an increased uptick in overall quality.

The writing hits a new level, and all main themes — aging, changing, toxicity, sociopathy, ambiguity, cynicism and surrealism — are seamlessly integrated into every hour, giving us the complete Sopranos experience.

It also helps that “Another Toothpick” is written by Terence Winter, who specializes in these la vie quotidienne installments. Où la la.

It’s quite a somber hour — the title phrase is used by Janice to refer to elderly cancer patients. Of course, she remembers it as something mother Livia used to say (Tony and Janice can both chuckle at this “fond” memory).  However, Uncle Junior’s not a fan. He acts quite moody all episode, influenced by the presence of Bobby Baccala Sr., a soldier from the Golden Age who is now dying of cancer himself, coaxed out of retirement by Tony.

Old man Baccala (father of Bobby Baccalieri) coughs up blood with every sentence, another toothpick with one foot in the grave. After Tony sees him for the first time in years (at a funeral, of all places), the old man shows he can still serve a purpose: kill some lowlife scum (his godson) who had brutally beaten a Soprano-family associate (Vito Spatafore’s nephew) in public.

The plight of old man Baccala earns our empathy, but it is Uncle Junior who deserves our sympathy. After successfully completing the hit, Baccala has a coughing fit while driving, and gets into an accident. Uncle Junior is desperate to know the true cause of death — was it the car crash, or was it the cancer?

This is because, as fate would have it, Uncle Junior has been diagnosed with stomach cancer himself. The elder generation dying off has always been one of The Sopranos’ chief interests (reflecting how Tony has felt ever since the pilot), and now Uncle Junior is joining their ranks. Series creator David Chase is well aware that death comes slow, but the news still hits hard.

Is Tony Soprano a good man? That’s another issue the series has returned to time and time again. His joint-therapy session with Carmela shows a crumbling marriage fraught with tension, while his casual racism at home has completely alienated his daughter. Even his preferential treatment toward Bobby Sr. is met with friction.

Tony’s internal crises are magnified by his encounters with a no-nonsense cop. After receiving a speeding ticket (and finding intimidation won’t work), Tony gets his political connection (Assemblyman Ronald Zellman) to make the problem go away. As a result, the officer gets demoted — Tony chances upon him working at a hardware store, no longer eligible for overtime.

It’s a clear example of Tony’s toxic influence — the man was only doing his job, and now his life is ruined as a result. It’s also a clear example that Dr. Melfi made the right decision at the end of last episode. She would’ve been embroiled in a no-win situation.

Tony initially feels bad for the cop — “Hey, just so you know, I didn’t ask [Zellman] to do that.” It’s a pathetic apology, but it’s genuine. Tony recognizes what he did was wrong and unfair. Later on, however, his heart hardens, and he stops trying to get Officer Leo his job back — “Prick got what he deserved, right?”

Tony is left standing in solitude at episode’s end, pondering the question for himself. The answer is apparent: he’s not a good man; he’s a piece of shit.

The episode is superbly rich and intricate, yet it never feels cluttered. That’s Terence Winter’s gift. He can craft endless variations on The Sopranos’ core themes without ever becoming repetitive.

“Another Toothpick” is a perfect distillation of the season three experience: powerfully humanistic and noticeably somber. Jack Bender (of Lost fame) directs the episode, and he makes frequent use of light and dark contrast. The daytime conversations often take place in natural light, giving off a stark and dim atmosphere. The sepulchral settings also go a long way — Uncle Junior’s house is starting to feel like a tomb.

This is The Sopranos doing what no other TV show can do better — packing all the complexities and disenchantments of daily life into an episode of television that is compellingly slight.

The Sopranos S3E5: “Another Toothpick”