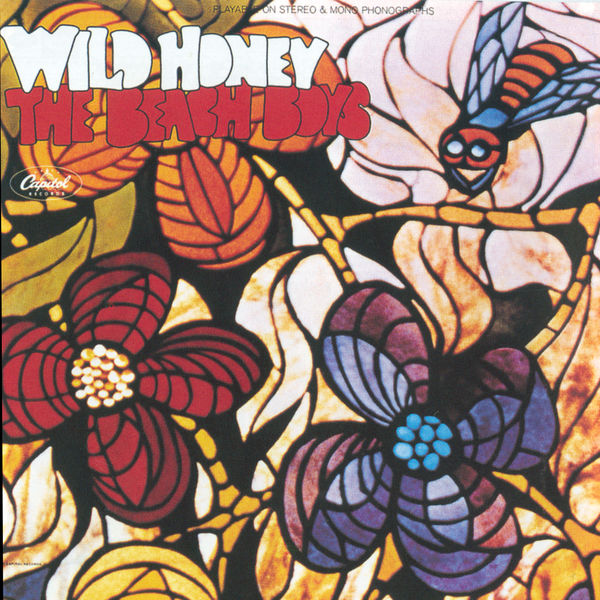 As rock and roll myths would have you believe, Pet Sounds is such a masterpiece that it caused Paul McCartney—driving at the time of his first listen—to pull over to the side of the road to fully process what he had just heard.  It inspired—motivated—The Beatles to create Sgt. Pepper’s, the de facto number one rock album of all time.

Pet Sounds is the actual number one rock album of all time, say what you will, but what more can possibly be said about it? The Beach Boys are probably my favorite band, but Pet Sounds is not the album I listen to the most.  There’s a difference between “best” and “favorite,” after all.  Here’s a new rock ‘n’ roll myth:

I was sitting in my car, as I often do, iPod plugged into the AUX cable, searching for a song to play.  The worst is when you can’t make up your mind whatsoever—when you go through your entire morning routine without a single song popping into your head.  That’s when you’ll find yourself—depending on the stereo capabilities of the vehicle—staring aimlessly at a wall of CDs, or scrolling up and down the “Artists” list on your phone.

It was the latter predicament in which I found myself trapped.  When afflicted by such a malady, sometimes you’ll decide to “Shuffle All,” but then spend the next few minutes skipping through the randomly selected tunes— “No…not that one…that one either…” etc.  In other words, back where you started.

Finally, I said to myself, “Fuck it, I’ll just put on Wild Honey.”  And my problems were forever solved.

Why Wild Honey? It’s no Pet Sounds, sure, but it is unlike any album I’ve ever heard.  I’m constantly looking for the next Wild Honey—an endlessly listenable album that is impossible to grow tired of.  Yet I have a hard time of finding another Wild Honey.  And that’s why I’m constantly listening to it.  It is my go-to record when I can’t think of what to listen to.  I can always count on Wild Honey.

Conventional wisdom would have you believe that post-Pet Sounds Beach Boys music is a mess—a creative collapse brought about by the failure of its planned follow-up, Smile.  Brian Wilson had a nervous breakdown and group leadership was ceded to his less talented siblings (and Mike Love).

They would spend the remainder of their careers deciding which old glories they wanted to recapture—the ambitious Brian Wilson art project of Pet Sounds/Smile, or the early- ‘60s “fun in the sun” surf-rock novelty machine.  If you buy into the conventional wisdom, The Beach Boys’ magic quickly wore off, and their post-Pet Sounds music is as inconsequential as Bruce Johnston.

But that’s just the conventional wisdom.  Upon closer examination, The Beach Boys remained one of the most interesting and admirable bands of the late-1960s, if not the most underrated.  The appreciation requires a little patience, but that shouldn’t be a problem—Wild Honey is only 28 minutes long, with not a single second wasted.

Once considered a visionary on the same plane as Bob Dylan or The Beatles, Brian Wilson shrunk from the public spotlight after the Smile project ultimately fell through. Unable to outdo himself, Wilson took The Beach Boys back to the basics.  A series of semi-psychedelic lo-fi LPs followed, kicked off by the divisive Smiley Smile (1967).

Wilson’s reclusiveness was akin to Dylan’s—as soon as they had reached a point where their art could go no further (Pet Sounds and Blonde on Blonde, respectively), they retreated; their music became small, personal, intimate.  Dylan wrote about country-rock outlaws (John Wesley Harding) while Wilson wrote about vegetables (“Vegetables”), but both shared the same minimalist aesthetics.

Smiley Smile was initially met with disdain—an album that was originally supposed to outclass Sgt. Pepper’s turned out to be nothing more than a too-stoned ummagumma.  Wild Honey further pushed away their audience.  By the time of Friends (1968) and 20/20 (1969), The Beach Boys were only a blip on the radar.

I asked Thomas Bingham, a musicology professor at SUNY Fredonia, whether he had any thoughts on Wild Honey.  “[I] can’t really say I have a well-developed opinion either way,” he replied to me via email.  “It didn’t make much of an impact on me.”

When considering The Beach Boys’ post-Pet Sounds career, critical attention tends to focus on the Smile remnants that occasionally surface on their subsequent albums.  And while I agree that songs like “Cabinessence” and “Surf’s Up” transcend the albums they appear on, it is important to ignore the shadow of Smile when evaluating their worth.

Which is why I continually return to Wild Honey.  There are very few, if any, traces of Smile’s influence, and so the recording comes across as natural and unburdened.  The Beach Boys are free to revel in R&B at a time when their contemporaries are heading further into maximalist psychedelia.  The Boys themselves were only a few months removed from the experimental Smiley Smile, and so this sudden turn to blue-eyed soul ends up more out of left-field than the “Woody Woodpecker Symphony.”

But it is R&B that comes with a twist.  The lo-fi production of Smiley Smile carries over, as do the minimal arrangements.  This stripped-down approach allows for us to see the framework of Brian Wilson’s songwriting approach—it’s all in the chord progressions, which subtly shift and never cease, pounded out incessantly on a warm, albeit slightly out of tune, honky-tonk piano.

This slightly skewered psychedelic soul makes for a very addictive listen.  The songs—two-and-a-half-minute quick hitters—just keep on coming and are binge-worthy in the way similar to a great TV show.  Most of them feel like they end too soon, but it keeps your attention enthralled.

The main reason I can listen to Wild Honey over and over is the mood that it conveys—pure, total happiness.   This is the Feel-Good Record of the entire 20th century.  Even the joke a capella closer (“Eat a lot/Sleep a lot/Brush ‘em like crazy”) is a perfect summation of the record’s charms.

The opening title track flips a whirring Theremin and an atonal organ solo into a delightful romp.  Phrases like “out of sight” and “dog-gone” (and “dog-gone out of sight”) are sung with pure and total conviction, and therefore evade corniness.  When the group invites us to “get a breath of that country air,” we know that it is all they ask.  Wild Honey concerns itself with simple pleasures—undeniably relatable.

The vocal harmonies, always a marvel with this band, are uncharacteristically limited.  The production is credited to the entire group, but the songs often feature a single lead.  Carl Wilson, who sings on four of the tracks, delivers a star-making turn.  His voice is perfectly adapted to the R&B aesthetic, unabashedly letting loose on the masterful centerpiece, “Darlin’.”

With the majority of songs credited to Wilson/Love, Brian is still the prime architect.  But instead of concerning himself with weighty coming-of-age themes, he is after carnal desires— “I’d love just once to see you in the nude.”

With the unparalleled chord progressions and perfect rhyme schemes, Brian proved he was still unmatched as a pop seer.  No verses with long metres like in “Don’t Worry, Baby” or “Heroes and Villains,” but it doesn’t get much better than “My heart was breaking ‘til you started making me feel like a natural man/ My mind was a mess ‘til you brought happiness now that’s not hard to understand.”  Plenty of internal rhyme and droning bass in “Here Comes the Night Time,” which happen to be two of my favorite things.

Like I mentioned before, the songs keep coming and it’s hard to stop listening.  Yet they never feel like fragments, even if the lazily melodic “Let the Wind Blow” is the only one that feels fully-formed.  It is one of the only songs that progresses to the middle-eight, but it still ends somewhat unresolved.

And that is the magic of Wild Honey—it shouldn’t work, but it does.  The music is driven primarily by piano, organ and electric bass, while the vocals—usually so poignant and serene—occasionally strain and become unintelligible, matching the joyously carefree attitude.

I am particularly drawn in by the deceptively simple progression of “Aren’t You Glad.”  The piano plunks out the time like a clock in Brill Building, while the chorus erupts into a brassy crescendo.  The tiny inflection that makes all the difference— “I’ve got a heart that just won’t stop beating for you,” followed by the perfectly-timed percussive heartbeat.

The shortened length of the album does not work against Wild Honey at all.  In fact, it helps you to know the album more intimately—I’ve memorized every sound.  I often use it to mark time: “Well, it’s only two Wild Honey’s away,” for example.

Could I be overrating the album? Sure.  Critical reaction has ranged across the board, from Robert Christgau’s rare A+ (“It’s method is whimsy, candor, and carefully modulated amateurishness, all of which comes through as humor”) to Pitchfork Media’s 3.5 out of 10 (“…it barely deserves a paragraph”).

The majority will agree, however, that Wild Honey is an undeniably happy record.  Isn’t that all anyone needs?

The most re-playable album ever made

2 thoughts on “The most re-playable album ever made”