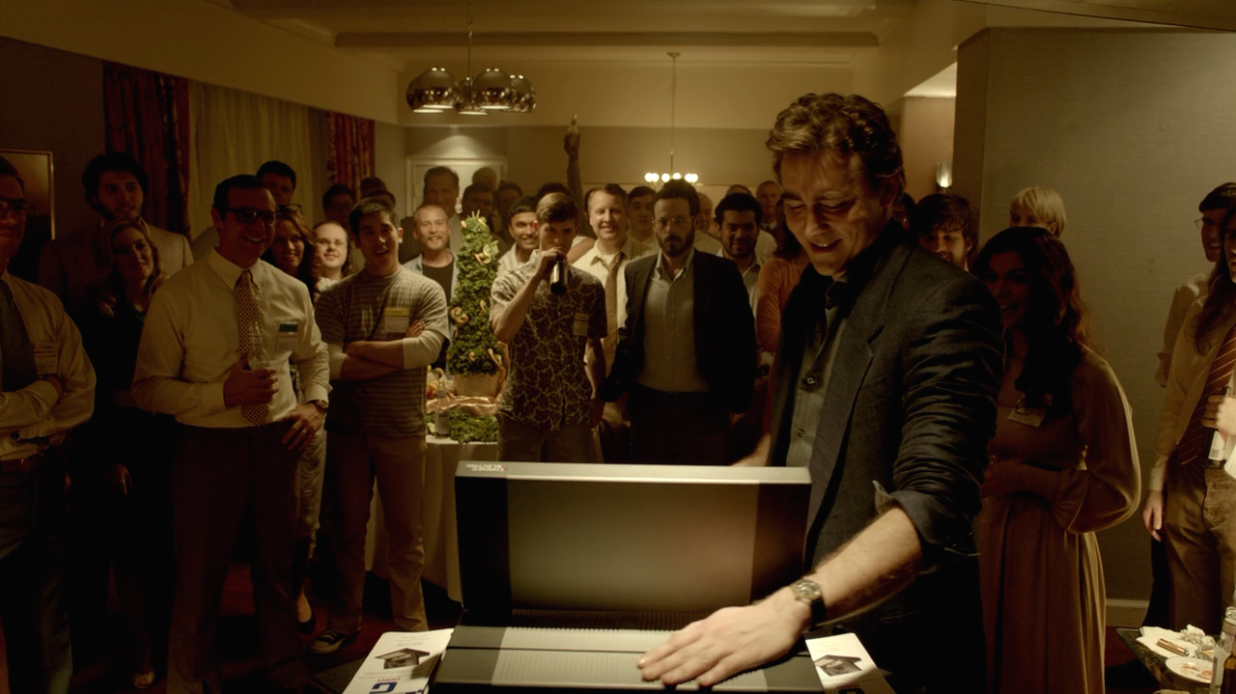 When you wanted lemonade, but got Country Time powder and a spoon

The preceding episode, “The 214s”, was very good, and unexpectedly so.  Halt and Catch Fire didn’t truly have an “it’s getting there” stage, where you could see episode-to-episode progress being made—it all just kinda sucked.  Which was totally okay.  Last episode, we were suddenly “there”—at the gates of prestige tvdom.  Which came as a shock, but a welcome one.  My expectations for “Up Helly Aa” were reasonably high.

I came away disappointed with “Up Helly Aa” (seriously, the ‘sode titles for Halt and Catch Fire are just as bad as Sense8, if not worse), but it was expected.  There are several moments where Halt does fulfill the promise of last episode, but there is a good deal more that are as disjointed and melodramatic as the rest of this damned show.

That’s just the disappointment talking.  Compared to episodes one thru seven, “Up Helly Aa” is far more compelling.  The whole gang heads out to Vegas for COMDEX where they will finally present the Giant and there is a heightened tension in the air.  The stakes are higher, and therefore I am a little closer to the edge of my seat.

But despite the increased plot importance, the episode was mainly a reminder of why Halt has failed in the past.  The gang are immediately faced with obstacles once they finally get to Vegas—they are denied a hotel room, they don’t have a compelling booth at the convention, and, later, the Giant won’t start up.

These plots feel forced, as all Halt plots have ultimately felt.  If Halt has taught us anything, it’s that a forced plot will ultimately lead to a corny scheme being hatched by one of its protagonists.  That protagonist has always been Joe MacMillan, who has been hatching corny schemes out of his anti-heroic ass since day one.

Equal blame must be put on the writers, who invented the asshole, and Lee Pace, who portrays it.  Whenever Joe MacMillan makes a speech—and there are more than a couple in this one—it is Don Draper’s words that come out.  But Lee Pace is no Jon Hamm, in looks or in acting ability, and C. Cantwell & C. Rogers are no Matthew Weiner.  Besides, it’s already been done.

Yet I’m torn, because the plots are somewhat interesting—especially when compared with the rest of the show.  Gordon’s scheme to get them a hotel room by tricking some nerdy programmers out of theirs is a worthy solution.  Likewise, the party scene the night before the Giant demo is a fun time too—booth babes, speeches, et al.

There are two genuinely great scenes that feel like extensions of the show we saw in “The 214s”.  There is also one “big moment” reveal that can’t be ignored because it is so pertinent to the plot.  They are, in a sense, the redeemers of “Up Helly Aa.”

The “big moment” is when Donna’s boss Hunt Whitmarsh, the Texas cowpoke she almost had an affair with a couple ‘sodes ago, is revealed to have stolen Cardiff’s Giant idea and spun it into, fittingly, the Slingshot, which is both faster and cheaper.  It’s a real punch in the gut and it works as a big plot twist, even if it was forced and clichéd.

But that means that Donna—who has just been a real drag—gets to have some major emphasis.  And that’s never good.

A genuinely great scene comes when Gordon, drunk and in a rage over Donna’s betrayal, removes Cameron’s personal interface from the Giant to make it faster.  Joe agrees with the decision and his ensuing argument with a heartbroken Cameron is everything I wished the episode would be.  It is tremendously directed and contains real emotion.  Great dialogue too, surprisingly.

The second episode-redeemer is the ending, which is as prophetic as Halt has ever been.  Maybe even topping last week’s War on Drugs fadeout.  Joe observes a nighttime unveiling of the Apple Macintosh in perhaps the show’s finest and most mysterious moment so far, his closing “it speaks” a damning indictment that the Cardiff Giant—and thus the entirety of season one—was doomed from the start.

In the end, it seems that Halt hasn’t learned much from its brief brush with greatness last episode.  The regression back to the same old mistakes is just disappointing this time around.  Aside from a few patches here and there, this is almost a series-confirming episode: it’s not worth it.

The tone of the review might not match the rating, but this is still a better episode than most of the ones that came before.  There are things happening here and there, where once there weren’t, so a certain level of interest is maintained.  But has this episode got my psyched for the finale?  No.  Do I think that Halt can turn it around?  No.  Do I hope they turn it around?  Godspeed.