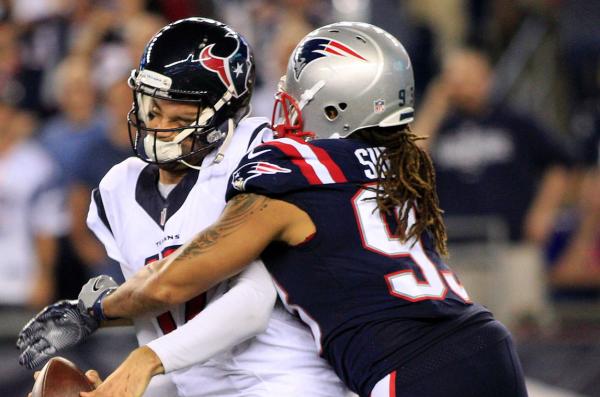 Wild Card weekend was kinda shitty, wasn’t it?  The two AFC contests, we already knew they were gonna be bad games and our assumptions weren’t wrong.  The Texans won an unwatchable snooze-fest against the already-thrown-in-the-towel Raiders, while the Steelers romped the Fish.  Two takeaways: Brock Osweiler is possibly the most unlikeable player since Johnny Manziel, and Matt Moore gained some Old Grisly Vet points by not dying after this hit from Steelers LB Bud Dupree.

Even the NFC games were one-sided blowouts.  The Lions didn’t put up much of a fight in Seattle, and now Matt Stafford has entered the unenviable territory of So Underrated That He’s Overrated quarterbacks.  After a clutch MVPish type of regular season, people started to remember that Stafford is on pace to be one of the most prolific passers in NFL history.  After last weekend’s no-show in the Pacific Northwest, you must now look more closely at his absolutely dismal record against winning teams throughout his career.

And Green Bay-New York, which had two great postseason passers pitted head-to-head, ended up being a good game, a close defense-filled game, until Rodgers channeled Jesus and was literally levitating at several points in the second half.

So, hopefully this weekend’s slate of Divisional Round action is much more juicy and watchable.

I give this one a cautious 9 because of Atlanta’s past postseason woes.  Remember when Matty Ice and the Red Birds fell to Eli’s Giants 24-2?  But, no, this game could possibly be an Instant Classic.  Matt Ryan and the Falcons offense has been near unstoppable for most of the season.  This is a team that can put up points.  On the other hand, I think I speak for everyone when I say that I’m getting tired of the Seahawks.  Rooting against a good (and often extremely lucky) team ratchets up watchability.

The Patriots are going to fuck the Texans uppp, son.  I know it.  You know it.  Bill O’Brien knows it.  It’s fun to watch Brady metaphorically waterboard opposing defenses week to week, but we’ve seen this movie before.  But at long last, this is the week where Brock Osweiler meets his shameful demise.  We get it, dude.  You’re 6 foot 8.  Big deal.

This is a great matchup.  The Chiefs have been streaking down the home stretch of the regular season, just like last year, and the Steelers unleashed the full potential of their scorched-earth offense against Miami last week.  Yet this one just might turn out to be kind of boring.  Can’t you envision a classic Alex Smith-Andy Reid game where the offense puts up 20 points but they still win thanks to the often befuddling nature of Playoff Big Ben and the Steelers incapability to maintain scorched earth from week-to-week?  (takes deep breath)  I can.  But, wait, this game is on NBC!  Sunday Night Football in the daytime?  Cris Collinsworth in the daytime?  SNF games always look the best, so I’m interested to see how they handle natural light.  Also, how will Collinsworth handle natural light?

The clear-cut winner.  Aaron “Jesus” Rodgers—or Aaron “Hail Mary, Mother of God” Rodgers, take your pick—carries the wounded Pack on his back down to the House That Jerry Built to take on the greatest NFL rookies of all time, Dak Prescott and Ezekiel Elliot.  So basically the two hottest NFL stories of the season clash in the playoffs.  Best game of the weekend.

Doesn’t Dallas seem like the classic “Tear through the regular season and then get taken totally off guard in the divisional round” team?  Aaron Rodgers was on one of these teams himself in 2011.  And Aaron “Virgin Mary” Rodgers beat one of those teams in 2010 (Matt Ryan’s 13-3 Atlanta Falcons) en route to Green Bay’s Super Bowl run.  Just sayin’.

And even though Rodgers has tasted Playoff Magic many times, the past five years he’s been knocked out of the postseason by some of the cruelest twists of fate in recent memory.  Many times he’s come out on the wrong side of some Instant Classics.  Last year it was the crazy OT loss in Arizona, the year before that it was the even crazier (craziest?) NFC championship loss in Seattle.  In 2012 and 2013, it was Colin Kaepernick, not Rodgers, who came out of their 49ers-Packers bouts looking like untouchable.  And, of course, the year before that was the 2011 season when the 15-1 Packers got smoked by the Giants.  All very memorable games, but all Aaron Rodgers losses.

This game is already in Instant Classic territory.