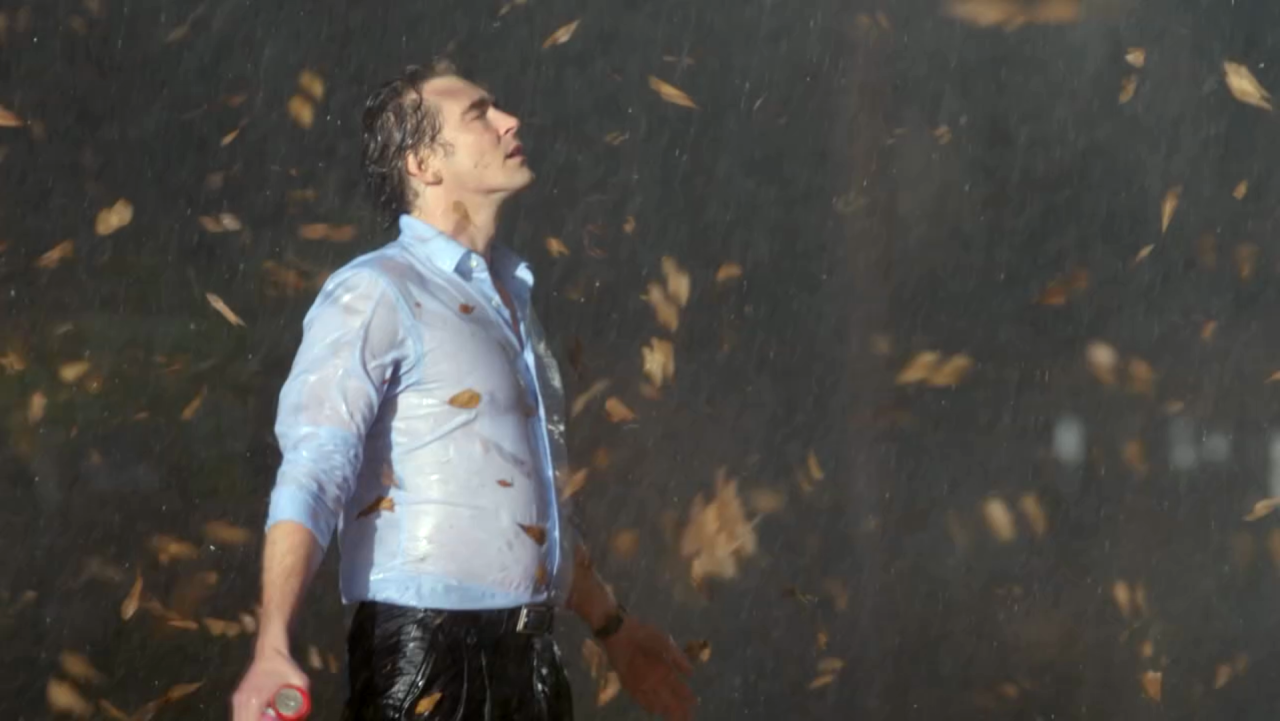 In “Landfall”, Dot.Com Draper is back and the writing staff seems to be reverting to their original aim of “Mad Men in the ‘80s but with computers”.  The previous episode, “Adventure”, was promising of a possible bright future for the show.  The beginning of “Landfall” returns Halt and Catch Fire to its roots—Matthew Weiner Prestige Playbook Chapter 2: “Dressing your Antihero”— and it seems like we’re in for one of those “aw crap” type episodes.  Luckily, “Landfall” ends up regaining its balance once it starts to get going.

I’m still searching for Halt’s main overarching themes.  Admittedly, I’m more of an aesthetics kind of guy, but with a television show, it’s always helpful to point such themes out.  It helps you learn more about the show and, more importantly, reveals what the show wants you to learn.  Not only that, but it’s what makes a show unique from the millions of other shows out there—the consistent viewpoints on certain issues that the Great Shows always tend to have.  Halt has suffered from writing problems so far, namely the fact that it doesn’t know what it wants to be, but some common themes are starting to come up throughout “Landfall”.

Joe MacMillan remains the cocksure monkey’s ass that he’s been since the pilot, but at least someone is calling him out on it now.  That person is Cameron, as it is revealed she and Joe are still in the throes of their on-again off-again Friendz w/ Benefitz “relationship”, an aspect of the show I haven’t put much stock into so far.  Cameron’s not feeling the love and argues with Joe whether he is even capable of human emotions.  It seems that Cameron might be noticing the writing problems too…

All three main characters have ambition, and that’s a semblance of a major Halt theme right there.  “It’s a show about ambition,” you could say, if you wanted to sound pretentious, admiring your Criterion Collection DVDs.

Cameron is a prodigy, the future of the computer engineering business.  Cardiff Senior Vice President John Bosworth lets her know this in another scene that features great chemistry between the two.  Cameron’s ambition—for as much as the punk in her would hate to admit—is an emotional one.  Disgusted by Joe’s seeming lack of human feeling, she proposes that the Cardiff computer have a more user-friendly interface.  She wants to bring personal computers to those who are hesitant of such futuristic machines.

Both Joe and Gordon reject her idea.  Gordon’s ambition is purely self-driven and revenge-based.  He’s the guy who feels the world has cheated him and waa-waa-waa because of it.  He’s not going to change his hardware designs just because Cameron wants his computer to have a heart.

In a semi-intriguing subplot, Gordon embarks upon a dangerous and soul-searching odyssey for Cabbage Patch dolls for his daughters.  Braving the elements, this unlikely story sees our sniveling Anti-Hero Jr. committing robbery and even coming across a dead body!  Jeepers!

Aside from gifting us with the delightful caricature Bosworth, Halt’s Texas setting hasn’t contributed to the show.  In “Landfall”, the setting plays an important role, if only because Hurricane Alicia is battering her way through town, giving us some gorgeous scenery.  Like a football game under the lights, the stormy hurricane weather provides for heightened tension even if there isn’t any.  That’s why I’m proposing that the Halt and Catch Fire universe take place in a state of constant hurricane.  It makes for decent TV.

Joe’s ambitions stem from his obvious “I Am a God” sense of entitlement, but he also wants to create something truly meaningful and iconic, of lasting impression.  After parading around as Dot.Com Draper for the beginning portion of the episode, he ends up going to dinner at Gordon and Donna’s house.  Gordon is out on his life-or-death mission, so Joe is forced to spend the evening with Donna and her two young daughters.  It is here where Joe gets to showcase some actual human emotion as he gets along good with the girls and helps get them through the storm.

Whilst rolling around in the mud on Donna and Gordon’s rain-soaked front lawn, Joe comes to the epiphany that he should accept Cameron’s idea of an operating system with a human touch, and to stop acting so much like a computer himself.  Please read that first part again.

“Landfall” is a “good” episode, by Halt and Catch Fire standards, I guess.  The same issues remain consistent, but the show might finally be finding its voice.  Truth be told, bonus points for the hurricane.

One thought on “Halt and Catch Fire S1E6: “Landfall””