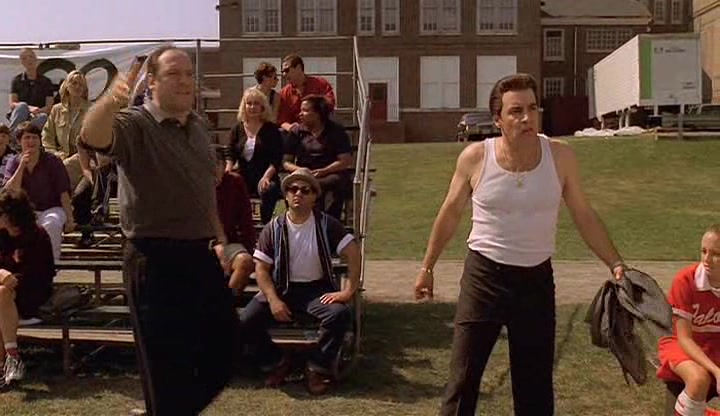 Boca: “South of the Border”

The Sopranos’ first season has a very interesting structure — it begins with a fairly coherent mob storyline in episodes one through four, has a unique standalone in “College,” picks up the mob story again in chapters six and seven, and then goes off on its own little tangent of character episodes before we hit the final stretch.

Last episode was a Christopher Moltisanti spotlight, one of the character’s best. “Boca” is another interesting standalone, with one part focused on Uncle Junior, while the other half features a moral dilemma involving Meadow’s high school soccer team. It’s a strange combo, full of one-off characters and unexpected plot lines, but the episode works because of a strong script from Jason Cahill, Robin Green and Mitchell Burgess.

In the world of The Sopranos, nothing is straightforward. Plot threads that may seem important are merely dangled in front of us, and that’s it. Just dangled. They merely act as the foundation for the character development happening just below the surface.

Take, for instance, last week’s threat of the federal indictments — it ultimately served as a springboard for series creator David Chase to examine Italian-American stereotypes. “Boca” takes a similar approach. Although the mob storyline keeps churning (the feds continue to keep a close eye on Junior, while someone in the crime family might be wearing a wire), it isn’t the main focus of attention.

To avoid being indicted, Uncle Junior takes his girlfriend, Bobbi, down to Boca Raton for a while to lay low. Real low. Junior is … well, let’s just say he’s good at eating pussy. But loose lips sink ships, and if word ever got out about his ability to eat out, then Junior would have a mess on his, er, hands.

It mirrors Tony’s situation in how he doesn’t want anyone to know he’s seeing a shrink. For both men, it’s seen as a sign of weakness, something that will make them appear soft. But thanks to Livia, Junior is already aware of Tony’s therapy sessions.

Carmela then relays this information to Tony, which turns a friendly golf outing into a thinly-veiled grudge match. For example: “Uncle Jun’s in the muff. Oh, did I say ‘muff?’ I meant, rough.” “Hey listen, my friend. At least I can deal with my own problems. Unlike some I know.”

Even though it appears to be comic relief, this seemingly unimportant digression on oral sex and masculinity leads Uncle Junior to come up with the idea of having his nephew killed. The Sopranos revolutionized the very structure of TV through its roundabout method of storytelling.

The other half of “Boca” involves Meadow and a girl on her soccer team named Allie. After a game, Allie slits her wrists, and it is later revealed that she’s been sleeping with the team’s coach. Tony believes that it is up to him and the fellas to take the law into their own hands.

Emily VanDerWerff, in her review of “Boca” for The AV Club, wrote that the episode feels dated because of this plot line, mentioning that it was an idea that was fresh when it came out, “but now we have stories like this on just about every primetime drama that traffics in the salacious … Similarly, it’s hard to watch “Boca” and not think of the other times The Sopranos would do this basic moral setup as a storyline and do it much better in seasons to come.”

I tend to disagree. The soccer-coach-sex-scandal isn’t a tired cliché. In fact, it’s timeless. Even though the whole thing comes out of the blue, with characters and plot lines that act as if they’ve been important the entire time, this isn’t a problem. As evidenced before, The Sopranos gives us a “Very Special Episode” storyline, but merely uses it as the backbone to explore something else. We barely see Allie or Coach Hauser — instead, we get a far more entertaining tale of Tony wrestling with a difficult moral dilemma.

Season one is all about asking the question “What kind of man is Tony Soprano?” In “College,” that question was answered with Tony garroting Febby Petrulio to death. The same question is on display in “Boca,” and the circumstances are somewhat similar. Once again, Tony is confronted with a man who has done a terrible thing, and he must decide whether he should enact justice. Meadow is once more close to the potential murder, making Tony’s decision that much harder.

The trio of “Tennessee Moltisanti,” “Boca” and “A Hit is a Hit,” aside from being self-contained, also provides the opportunity to expand the series’ supporting cast. Last episode, we saw larger roles for Chris and Dr. Melfi. “Boca” does the same for Uncle Junior and Artie Bucco.

Artie is a character who perpetually embodies the main moral dilemma Tony faces in this episode, albeit on a much smaller scale. He’s been Tony’s friend since grade school, and of course he’d love to share in the easy lifestyle that is within reach, but his guilty conscience and his nagging wife, Charmaine, are always there to sway him back.

Like Meadow, he symbolizes someone who is free of mob influence. He’s ultimately the only one who can convince Tony to call off the hit. Thanks to Artie, we see that Tony is capable of being a good man, instead opting to let the police handle the situation.

But the issue is called into question once again in the episode’s great ending sequence, framed from Meadow’s perspective. She watches from the upstairs balcony as a very drunk Tony laughs hysterically to Carmela, “I didn’t kill nobody!” A glum sense of unknowing resides on Meadow’s face, similar to AJ looking on from afar at the end of “Meadowlands.”