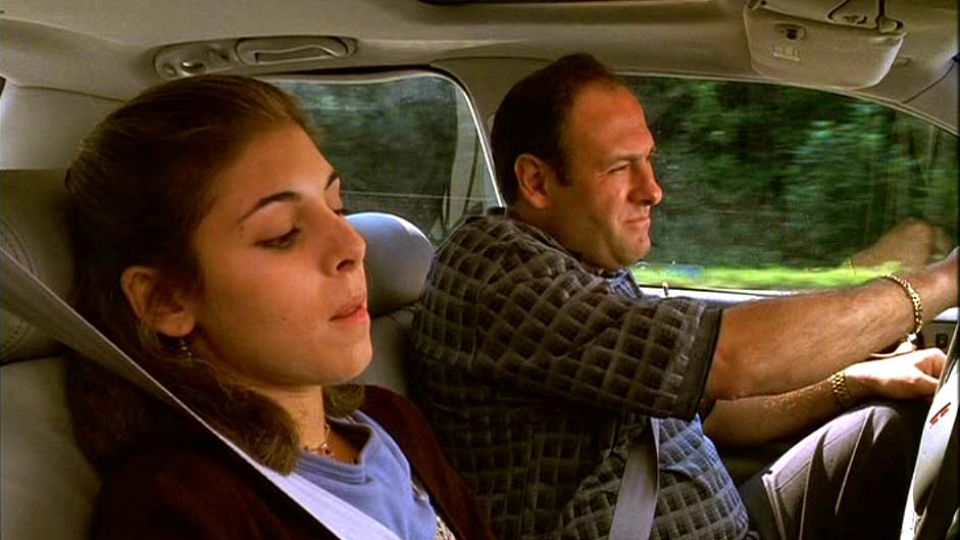 College: “The Greatest Television Episode of All Time”

“College” is a simple episode. Tony Soprano and his daughter, Meadow, are off in New England visiting prospective liberal arts schools, while Carmela spends the night back in New Jersey with a priest. No other distractions, just two stories that build to thunderous climaxes.

Mere minutes into the episode, Meadow asks her father straight up, “Are you in the mafia?” It’s the question we’ve wanted Tony to address all along, and it catches him by surprise. At first, he denies it, but eventually admits the truth, telling Meadow that she is almost a fully-grown woman and it’s best to be honest with her. Not too honest, of course — best not to divulge any specific details. But the gesture itself makes us proud. Even if the overall subject is inherently bad, Tony is being a good father by being truthful to his daughter.

Throughout the first four episodes of The Sopranos, we’ve mostly seen Tony as a pretty good guy — relatively speaking, of course. Sure, he used a telephone to beat the shit out of Georgie the bartender, and, yeah, he cheats on his wife with a smoking hot Russian mistress, but for the most part, we have been witness to an admirable cavalier — the kindhearted father who loves his kids, the teary-eyed friend at Jackie’s deathbed and the emotionally vulnerable psychiatry patient during his therapy sessions with Dr. Melfi.

“College” is the episode that fully calls all these supposedly endearing qualities into question: what kind of man is Tony Soprano? Gary Cooper or Golem? Hero or antihero?

Tony and Meadow stop at a gas station, and Tony recognizes someone he used to know. The man in question is Febby Petrulio — a former gangster turned informant, now living in Maine thanks to the witness protection program. Tony tells Meadow to get in the car, and then they speed off, swerving through traffic in hot pursuit.

For the time being, Tony is no longer concerned with visiting colleges — he’s focused on finding and confirming and then killing a traitor. But that’ll be pretty hard to do with Meadow in tow. Even though he told her the truth about being in the mafia, he can’t possibly conduct business with her around, right?

However, as soon as Tony gets the chance, he immediately calls Christopher from the pay phone, telling him the details of the situation, and asking him to look up the license plate number he read from Febby’s car. It’s clear that he will kill this man, even if we don’t really want to believe it.

Back in New Jersey, it is constantly raining, and Christopher, the only other mob character featured in the episode, spends the night waiting on calls and orders from Tony. He has to keep running out to the pay phone in the street, standing in a torrential downpour, and it’s like he’s in some sort of limbo. The scenes seem to exist outside of time.

This is Christopher’s life in a nutshell, and as the series goes on, we’ll see how he is trapped by his loyalty to Tony. If “College” exemplifies anything, it’s that Tony’s influence is toxic to everything it touches, no matter the distance. For instance, Christopher is hours away, standing in the pouring rain with soaking wet shoes, but that’s nothing compared to Febby Petrulio, who changed his name and moved to a different state, yet still can’t escape the mob’s murderous revenge.

Although Chris only plays a trivial role in the episode, this is the first installment of the series that fully establishes — symbolically speaking — his ambivalence toward his chosen way of life. He’ll forever have a dark cloud hanging over him until the end of the series.

Elsewhere in Jersey, Carmela starts the day sick in bed. AJ goes to spend the night at a friend’s house, and Father Phil Intintola, the friendly priest, stops by. Father Phil is a known schnorrer (another Jewish word, like ‘golem,’ this one meaning ‘mooch’), and he initially drops in solely because he wants to eat some of Carm’s baked ziti. That’s a double entendre.

It’s quite obvious that Carmela and Father Phil share a mutual attraction for one another. This is evident from the moment the doorbell rings: Carmela quickly fixes her hair and puts on makeup in the mirror. Furthermore, the mood is just right — AJ off to a friend’s house, Tony and Meadow out of town, and the two of them sitting on the couch, watching The Remains of the Day, drinking plenty of wine.

Added to this, Carmela is angry with Tony for not telling her that his therapist is a woman (Dr. Melfi calls the home to cancel an appointment). “Why would he lie about it unless he’s screwing her?” she asks, and she’s justified in thinking so, even if it’s not true. After all, Tony took the time to call Irina, his Russian mistress, from the pay phone up in Maine, and Carmela is well aware of his many infidelities.

As a matter of fact, she’s at a breaking point. She breaks down in tears, and confesses her enormous guilt in being married to Tony, admitting that she looks past his mob affiliations because she loves the luxury-filled life it has provided her with. Father Phil offers her Communion and, lost in the moment, the two are nearly driven to kiss each other. The moment is averted when the very drunk priest suddenly runs into the bathroom to vomit. He spends the night on the couch, the rain pattering on the windows.

In the morning, the two will reflect on a night that felt immoral although not a single sin was committed.  “Of all the finook priests in the world, why’d I have to get the one who’s straight?”

While much of the greatness of “College” stems from Tony’s storyline, Carmela’s contributions cannot be understated. Up until now, Carmela has been portrayed as a shallow and privileged housewife. “College” is the first time we see her develop into a considerable and complex character of her own. The storyline is carefully written, with each bit of dialogue played out for maximum effect. On top of this, it’s possible that Edie Falco’s performance in this episode is quite possibly the greatest performance by any actress in TV history.

Back in Maine, the tension is beginning to ratchet up. While Meadow is partying at the motel bar, Tony has free time to do some snooping around. After making more calls to Chris, he goes to investigate the stranger’s home. Beyond any reasonable doubt, he confirms that the man is indeed Febby Petrulio, living comfortably with a wife, a young daughter and his own travel agency.

Meanwhile, Febby suspects that Tony saw him back at the gas station, and is suspicious when he hears a car (Tony’s) leaving his house. He tracks down the motel Tony is staying at, and waits in the parking lot with a gun. He sees Tony returning — with a very drunk and sick Meadow — aiming his gun, but he doesn’t shoot. Perhaps it’s because Tony is with his daughter. Or perhaps it’s because there’s also an elderly couple outside, and he doesn’t want any witnesses. We want to believe the former, but it is in fact the latter. Likewise, we hope that the connections to family are enough to spare violence between the two. But Tony was only focused on one thing when he saw Febby with his wife and child, and that was correctly identifying him as a man who must be killed.

Alan Couture directs the episode and makes prominent use of shadows and light-and-dark contrast, the two Tonys walking hand in hand.  The editing — full of fraught pacing and back-and-forth tension as Tony and Febby search for one another — is a big part of what makes this episode the bona-fide classic that it is. It has the feel, to me at least, of the Coen brothers’ great debut, Blood Simple, the web between the characters drawing tighter and tighter.

But to give this episode the comparison it deserves, I’ll have to borrow a page from one of Meadow’s prospective liberal arts schools — the chiaroscuro in “College” is comparable to Rembrandt’s The Anatomy Lesson of Dr. Tulp.

The next day, Tony drops Meadow off at Bowdoin and urgently leaves, saying he forgot his watch back at the restaurant, giving excuses and tiptoeing questions. Febby, at his travel agency, hears a noise in the parking lot. He goes outside to investigate. Tony brutally garrotes him, merciless and remorseless. After the deed is done, Tony walks across the lot, looking up at a flock of ducks flying away.

It’s a haunting scene, an image that sticks in our heads long after it’s gone. For Tony to kill this man for this particular reason, it changes our entire perspective on him. We didn’t actually believe he was going to do it until he did it.

While Tony waits for Meadow back at the college, he looks up and sees a Nathaniel Hawthorne quote adorning the wall: “No man can wear one face to himself and another to the multitude without finally getting bewildered as to which may be true.” It’s a perfect quote to encapsulate Tony’s main moral dilemma — to which family does he truly belong? At this point, Tony himself doesn’t even know. The ducks flying away are the perfect symbol to capture this sentiment, both a reminder and a warning for Tony’s soul.

On the drive home, Meadow notices that his hands are bloody. Tony brushes it off with fumbling excuses, but the conversation reaches a point where it seems like the truth is clear. They exchange a very knowing “I love you” “I love you too” and continue driving.

Like it so often does, The Sopranos leaves us with a sublime, low-key ending to perfectly cap off the episode. Tony and Meadow return home, and Carmela tells Tony that the priest slept over.  Arguing ensues (“This is too fucked up to even comprehend”), forcing Carmela to pull out the chair (“Your therapist called. Jennifer?”), and Tony is immediately put on the defensive. The ending is nothing, but it is also everything, summing up the entire episode in a beautifully understated fashion.

Without a doubt in my mind, this is the greatest hour of television ever produced. It’s a tour-de-force of emotion, and a powerhouse display of acting, and it’s top-notch in everything else, too — writing, directing, editing and all the rest of that behind-the-camera parcheesi.

Very few TV episodes deserve a perfect 10 out of 10, and The Sopranos actually has several, but “College” is the one installment that stands out above all the rest. It is the hour by which all other hours must be judged, the benchmark of sublimity.