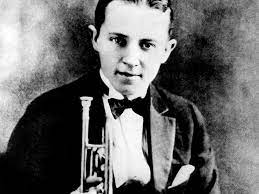 Born in Davenport, Indiana in 1903, Leon Bismark “Bix” Beiderbecke was a prodigious musician proficient on several instruments. He fell in love with “hot” jazz, influenced mainly by the works of the Original Dixieland Jass Band and popular Chicago bandleaders such as King Oliver. Self-taught, he became a celebrated cornet player and found success with several sought-after bands throughout the country, including the Paul Whiteman orchestra. It wasn’t long before Beiderbecke’s solos became the stuff of legend. Along with Louis Armstrong and Duke Ellington, Bix was the most influential jazz artist of the decade.

Beiderbecke’s style took heavy influence from classical Impressionism, which in turn pointed the way toward jazz modernism in the 1940s and ’50s. Despite his status as a true visionary, Beiderbecke’s personal life was filled with struggles, including alcoholism, drug addiction and erratic behavior. He died of pneumonia in 1931 at the age of 28. Nevertheless, the legacy of “the Man with a Horn” lives on through his timeless body of work. Keep reading below for Bix Beiderbecke accolades and music reviews.