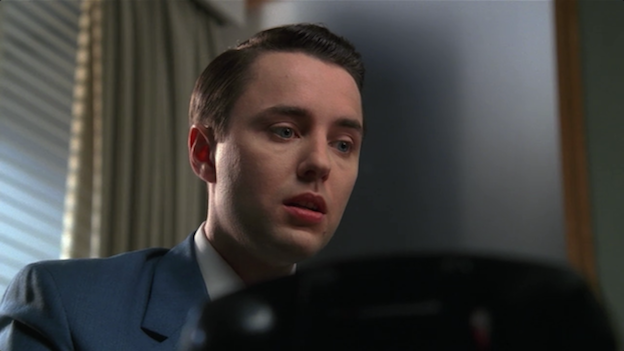 “Shoot the Plane Down”

Mad Men is elegant, richly-textured and full of warmth and sincerity. But just like last year, season two gets off to a slow start. This will become somewhat of a trend — the early episodes of any given Mad Men season are slightly inconsequential from a plot development standpoint.

Yet from a character development standpoint, “Flight 1” excels. Even though the storylines don’t amount to much, the episode weaves an exquisite tapestry of introspection and contemplation.

That being said, it’s still the most boring installment since “Marriage of Figaro.”

The most notable storyline occurs when American Airlines Flight 1 crashes into Jamaica Bay, leaving no survivors. Even more notable is the fact that Pete Campbell’s father was among the fatalities.

“New Amsterdam” was Mad Men’s first attempt at humanizing Pete, formerly the show’s most insufferable character. “Flight 1” follows a similar blueprint, as Pete is unsure how to feel about the death of the man who hated him since birth. He shows little emotion over the tragedy, and doesn’t even cry when he has to console his mother. Ironically, his indifferent demeanor is what earns our sympathy.

As a matter of fact, everyone seems rather indifferent about the crash. Duck Philips sees it as an opportunity to pursue the American Airlines account, which forces Don to reluctantly drop Mohawk Airlines as a client.

Meanwhile, the rest of the employees — just a few minutes after huddling around the radio to listen to the news report, no less — make several distasteful jokes about plane crashes. Pete Campbell included.

The irony is that this is the only place where he values loyalty. At home, he’s becoming increasingly bored with Betty’s trivial complaints, and “Flight 1” hints that the only thing that can give Don the jolt of energy he needs is, you guessed it, another woman in his life.

It’s also exactly what Mad Men needs in order to jump-start season two’s slow start. For now, however, Don’s next affair will have to wait. When a sexy Asian waitress comes onto him at a restaurant, he politely says, “Not tonight.”

The key word, of course, being “tonight.”