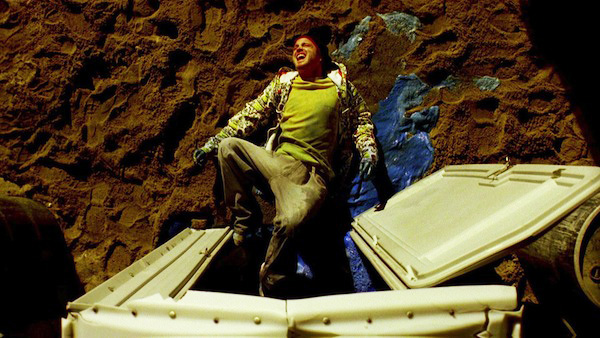 When you walk naked through a supermarket in a fugue state, things do not simply go back to normal. You can’t start living life again after being caught swinging your dick down aisle 12. Especially when the fugue state may or may not have been real.

Furthermore, you can’t just cheerfully make breakfast for your family as if nothing ever happened. They’ll think you’ve gone completely fucking crazy. Your pregnant wife will start smoking cigarettes. Your son will change his name to Flynn. Nothing will ever be the same.

For some reason, Walter White can’t seem to grasp this simple concept.

Skyler knows that Walt is hiding something. She suspects that the fugue state was total bullshit, and she’s disgusted by Walt’s pathetic attempts to feign innocence. An apology omelet is at the very bottom of the “I walked naked through Whole Foods because I hate my life, please forgive me” food pyramid.

Even though Skyler’s being a cold-hearted bitch to a man dying of lung cancer, she’s perfectly justified in doing so. Leaving the house for long periods of time, not engaging in conversation and toying with her husband’s emotions is just Skyler giving Walt a taste of his own medicine. And that’s payback for things that were already going on before the fugue state.

Viewing things from Walt’s perspective, it’s easy to understand his frustrations. The alibi worked, but his family doesn’t view him the same. They won’t even eat his breakfast. However, Skyler is the one who deserves our sympathy more than Walt. She even gets to have her own Betty Draper in “Shoot” moment when she defiantly lights up a cigarette at the end of the episode.

The character of Skyler may be somewhat insufferable, but actress Anna Gunn has done a terrific job of selling it.

Walt is facing some tough times, but he can’t even begin to imagine the trials and tribulations that Jesse Pinkman is going through. After being released by the DEA, Jesse — like Walt — was hoping for a simple return to normalcy. Unfortunately for him, his parents have decided to kick him to the curb. With nowhere to go, no friends to turn to and all his possessions either seized or stolen, Jesse is literally left on the streets with pennies to his name.

You can actually pinpoint the exact moment Jesse hits rock bottom — falling through a Port-o-Potty and crawling through the middle of a junkyard covered in shit. The good news for Jesse is that he can only go up from here.

After stealing back his RV, he reluctantly goes to Walt’s house to seek advice. This backfires almost immediately, and Walt and Jesse soon find themselves literally clawing at each other’s throats.

“Down” does a great job of putting all the main characters on level playing fields. Nobody’s got it worse than the other. In their own ways, they’re all crawling through a pile of shit — both literally and figuratively.

The ending of the episode is a fantastic scene in which Walt and Jesse see each other as equals for the first time. No more talking down or trying to prove something to each other. No more father-son, teacher-student, and friend-foe dynamic. Lying on the floor of the RV, they are one and the same. They finally have sympathy for one another.

Walt even invites Jesse inside.

It’s a perfect line to close a poignant episode.

-Once again, we begin the episode with a black-and-white-and-pink teddy bear sequence that harkens back to the season premiere. This time, we see the teddy bear fished out of a swimming pool by men in hazmat suits, who then proceed to put the bear in a plastic evidence bag.

-As Walt and Jesse lie exhausted on the floor of the RV, Walt is framed in a way that is eerily similar to the final shot of the series.

-The ending of “Down” is one of my personal favorite moments of the series. It’s heartwarming to watch Walt and Jesse sit down and eat breakfast together, probably the closest they’ve ever been to “friends.” It’s perfect and poignant and very Mad Men-esque.