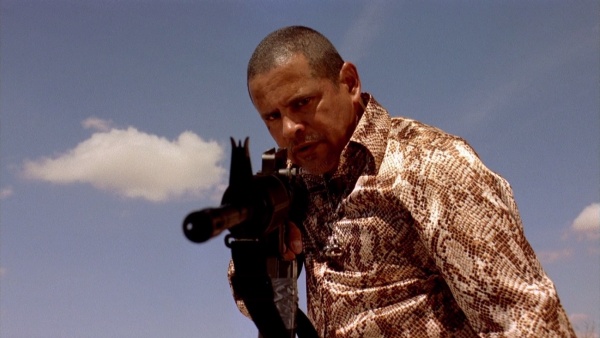 Most TV shows fail when they stray out of their element. For instance, a new setting or locale, even a new character, can throw everything out of balance. Breaking Bad does just the opposite; change is where the series excels. Case in point: “Grilled” takes Walt and Jesse hostage with Tuco Salamanca to a remote hovel in the middle of the desert. It’s the most exciting episode since the pilot.

It also introduces the most unlikely villain in the show’s history: Hector Salamanca. Tuco’s sickly uncle is bound to a wheelchair and his only method of communication is a high-pitched desk bell. Despite this, he becomes Walt and Jesse’s deadliest adversary.

Tuco is paranoid that the DEA is closing in on him (which they are), so he has kidnapped Walt and Jesse in order to continue his meth empire south of the border. For now, Hector’s secluded abode serves as the perfect hideout until his cousins can smuggle the trio to Mexico.

Although the episode also focuses on Skyler’s emotional struggle back home, Breaking Bad is at its best when it pits its main characters between a rock and a hard place. Four criminals together in the desert, one of whom can’t even speak, is the tensest TV of 2009.

“Grilled” is also a perfect storm of miscommunication. Walt and Jesse, ricin in hand, will say anything to kill Tuco and escape to safety. Meanwhile, Tuco himself is so psychotic (and high on crystal meth) that he can’t tell his ass from a hole in the ground. By default, Hector is the only one who tells the truth, which is what makes his wordlessness so terrifying. The ring of his call bell is more ominous than anything that can be verbalized.

After managing to escape, Walt and Jesse watch from a distance as Hank and a bloodied Tuco engage in a gunfight at close range. It leaves Tuco dead. And it draws the web connecting Walt and Hank to the eventual endgame even closer.

“Grilled” is a perfect example of how Breaking Bad can crank things from zero to a hundred at a moment’s notice. Tuco’s volatile behavior signaled that he wasn’t long for this world, but to see him only last until episode two of the second season (and only four episodes overall) — and to be killed by Hank of all people — is the biggest shock that the series has delivered so far.

In reality, Tuco was never intended to be the “big bad,” just a minor setback. Surprisingly, his uncle, Hector, will have a far greater impact on the story than the crazed drug kingpin ever did.

The beauty of Breaking Bad is in its ability to subvert expectations without being cliché. No one could have ever predicted the events of “Grilled,” but every plot twist makes perfect sense within the context of the episode.

The only question now is, “What happens next?”

-Actor Raymond Cruz has stated that he wanted the producers to kill Tuco off because the character was so hard to play. Does that make him a quitter? No. It makes him a hero because the series gets better now that Tuco’s dead. He will return in Better Call Saul, however.