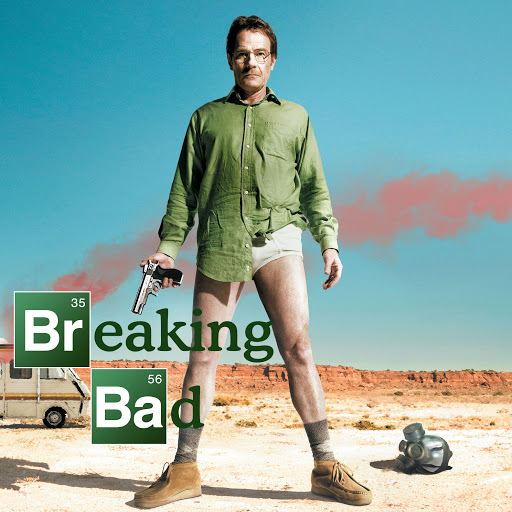 An RV screams down a dusty road in the middle of the desert. The frantic driver is wearing only tighty-whities and a gasmask. After crashing the vehicle into a ditch, the driver grabs a gun and a video camera, makes a tearful confession to his wife and kids, and then awaits the oncoming sirens with his pistol drawn.

Right from the start, Breaking Bad is one of the most exciting TV shows ever made. As a matter of fact, it only takes five minutes for us to become completely hooked. The real trick, however, is sustaining this level of greatness past the first episode.

Breaking Bad not only exceeds expectations; it shatters them. Throughout the first seven episodes, series creator Vince Gilligan sketches an intricate and immersive drama that stands on par with the likes of Mad Men and Deadwood. But it only hints at the greatness to come.

Let’s start with the subject matter. From an aesthetic standpoint, crystal meth is the perfect drug to build a TV show around. In its fictionalized portrayal, crystal meth is mysterious. Even the way the drug is made — “pure chemistry,” as Walter White puts it — is fascinating. Scientific, but also beautiful. A TV series about weed or heroin would have been cliché. But a show about crystal meth, the possibilities are endless.

Sure, it’s glorified and glamorized, but that’s why we watch movies in the first place. Even if the dangers of addiction have only been hinted at, the series is so engrossing and riveting that the very notion of crime itself is transcended. The viewer can’t help but cheer as Walt transforms from mild-mannered high school chemistry teacher to ruthless drug dealer. We’re the ones who are addicted.

Then again, Breaking Bad is much more than a crime thriller about crystal meth. It’s also a great family drama. Led by an all-time performance from actor Bryan Cranston, the emotional nuance and complex character study is the real reason why this series is so powerful.

So, how then does season one — in which five out of seven episodes surpass the coveted 9.0/10 threshold — only garner an A-minus?

As a collective whole, Breaking Bad’s truncated first season isn’t necessarily unfinished, but it is somewhat inconclusive. This might seem like an unfair complaint, especially when considering the effects of the 2008 writers’ strike, but the argument is still valid. The shortened length causes some of the story beats to feel misplaced. For instance, the best episode is the first episode, the season finale doesn’t feel like a season finale, and the side characters — Skyler, Walter Jr., Hank and especially Marie — are inconsequential throughout. It’s the only Breaking Bad season that is inherently flawed.

Furthermore, it’s important that we keep things in perspective. Everyone can agree that Breaking Bad seasons two and three are significantly better than season one, and that seasons four and five are some of the greatest television ever produced. This makes the math quite simple: A- < A < A+

Nevertheless, season one is still an essential aspect of the show’s enduring legacy, even if it’s technically Breaking Bad’s “worst” season by default. As a matter of fact, you could say that season one is the most crucial part of the story in the grand scheme of things.

The stakes may be smaller, but the character dynamics are much more intimate. Likewise, these early episodes have an endearing sense of innocence that simply doesn’t exist in the apocalyptic carnage of the later years. In retrospect, it’s fascinating to look back at Heisenberg’s humble origins.