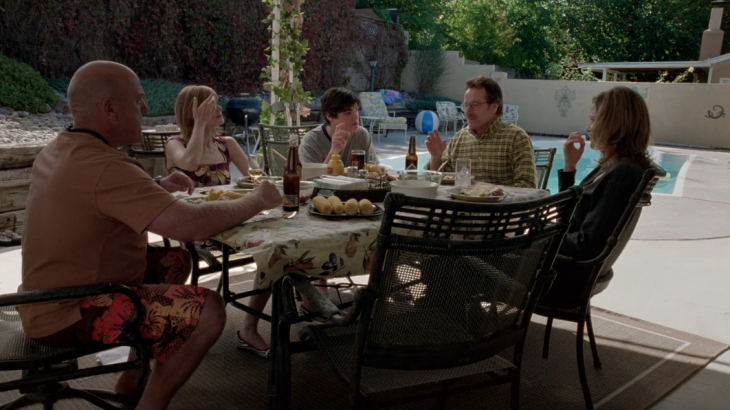 Through three episodes, Breaking Bad has been an action-packed crime drama. “Cancer Man” slows things down a little and proves that the series can also be a great family drama.

Ever since day one, it was only a matter of time before Skyler and Walter Jr. — and, to a lesser extent, Hank and Marie — became essential characters. Now that Walt has finally revealed his cancer diagnosis, the lives of the White family have been turned upside down.

However, the main reason “Cancer Man” is so effective is because it focuses on a unique perspective that we never really considered: Jesse Pinkman’s family.

Jesse’s parents are wealthy and affluent; nothing at all like their deadbeat, drop-out son. Jesse arrives at their doorstep after deciding to detox for a bit, and it’s clear that they’ve all been through this song and dance before. Jesse’s addiction has caused his parents — and his younger brother — untold amounts of pain. This is just the latest episode in a seemingly endless cycle of giving up/starting over that always ends with the same results.

Even though his parents accept him into their house, Jesse is hardly treated like a prodigal son. In fact, it’s heartbreaking to watch Jesse sneak around his childhood home like some sort of pariah. Then again, it’s easy to empathize with the parents, too. Their youngest son, Jake, is an overachieving prep-school student — the perfect child, if you will. They can’t afford to let him be corrupted by Jesse’s influence, even if they’re brothers.

Last episode, it was suggested that Walt has no soul. That doesn’t mean Breaking Bad has no heart. The series’ emotional compass often shows up, unexpectedly, through the eyes of Jesse Pinkman. For example: he gets kicked out (again) when his parents discover a joint in the bedroom. Even though the marijuana actually belonged to his younger brother, Jesse takes the blame. “That was skunk weed anyways,” Jesse says to his brother as he stamps it out.

Then he leaves forever.

Meanwhile, Walt expresses doubts about undergoing chemotherapy despite the wishes of his family. Although it’s never explicitly stated, Walt just wants to die in peace. Cook meth, and die in peace. Two years is a long time when you really think about it, and he never wanted his family to find out anyways.

Then again, Walt has an unborn child on the way. And his relationship with Walter Jr. may be fractured beyond repair. “Why don’t you just die already then?” his son mocks. Walt’s nonchalant, defeatist attitude may somewhat make sense to us, but it is mind-boggling to his family.

The terminal prognosis has somehow given Walt a newfound sense of freedom. For example: he blows up a guy’s car simply because he was being a douchebag. This is how Walt wants to spend his last days. And, once again, although it’s not explicitly stated, Walt’s family poses a problem to these new liberties.

Although it seems like an ordinary episode, “Cancer Man” is anything but. Like The Sopranos and Mad Men before it, Breaking Bad excels in the quiet moments of introspection. But it’s the appetite for destruction that sets the series apart from its contemporaries.

“Cancer Man” is a great episode that only hints at the action to come, instead preferring to meditate in the moment. It’s a necessary hour of homeostasis that allows the story to take a breath, think about what it’s done and then reset. Great family drama doesn’t need to be fast-paced.

-Series creator Vince Gilligan got his start in television as a co-producer for The X-Files, ultimately writing a total of 30 episodes for the popular sci-fi series. The title “Cancer Man” is not only a reference to Walter White, but also an homage to the Cigarette Smoking Man, the mysterious chain-smoking character played by William B. Davis.

-The pre-credits sequence shows Hank addressing the DEA about a potential new meth kingpin in town. The investigation is still in its infantile stages, but we can reasonably assume that Breaking Bad’s endgame will involve a Walt vs. Hank showdown of some sort.

-Speaking of Hank, he’s grown on me big time over the last couple episodes. He was kind of a prick in the pilot, but he’s now a lovable wiseass.

-One of the more heartwarming moments of the episode is when Jesse sits in his childhood bedroom and looks through his old possessions. Among the toys and family photos, he finds a crude drawing of Mr. White with a beaker up his ass. It’s a high school chemistry quiz from years ago, on which Jesse received an F.

-Has there ever been a more insufferable character than Ken, the lawyer douchebag who gets his BMW blown up by Walt? There is no doubt in my mind that Ken is the most vile, evil and intolerable character in the entire Breaking Bad universe. He also appears in a season two episode of Better Call Saul, the spin-off series to Breaking Bad.