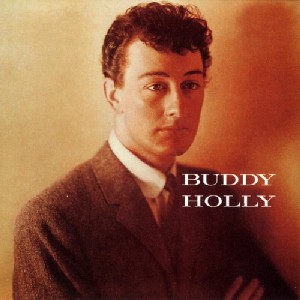 I am still amazed by the fact that Buddy Holly’s self-titled 1958 LP isn’t more widely recognized for what it is: the best album of the early rock and roll era. Holly’s career has been shrouded in myth ever since the day the music died — Holly the persona is legendary; for some reason, Buddy Holly the album isn’t. Nevertheless, the album has more songcraft than Elvis Presley, more rhythm than Chuck Berry and Bo Diddley, and more subtle emotional nuance than all three combined.

Of course, there are a few filler tracks, but throughout 12 songs and 24 minutes, Holly shows remarkable growth from his 1957 Crickets debut. The songwriting and the vocals and especially the musicianship have matured by leaps and bounds. This is most obvious in the greatest song of the decade: the celesta-tinged “Everyday.” Nostalgic, hopeful, tender, melancholy, subdued, lovelorn — Holly encapsulates the dreams and desires of an entire era of American history in only 2:09.

Along with the celesta, Holly incorporates several idiosyncratic quirks that break with typical convention. For example, the slinking bubblegum organ of “Valley of Tears.” Or the bright, jangling guitars of “Listen to Me.” Throughout the record, pianos lead the way and guitars are understated. Has there ever been more tension created out of nothing than on the ultra fast yet remarkably spare “Peggy Sue”?

Even Holly’s vocals — take “Look at Me” or even “Rave On,” for instance — are ahead of their time. The winding nature of the melodies, which are both genuine and subtly complex, are precursors to early Lennon/McCartney, proving that the influence Holly had on The Beatles was substantial. They wouldn’t even be called The Beatles if it wasn’t for him.

Much of modern rock is indebted to Holly’s pioneering songwriting. You can trace his impact through Mick Jagger to Elvis Costello to Rivers Cuomo. But if Holly had never boarded that plane, what more could have been?

This self-titled solo debut touches base with several styles that wouldn’t come to fruition until the next decade: baroque pop, folk rock and, if you really want to stretch the definition of the chugging beat of “Peggy Sue,” protopunk. His untimely death is one of the greatest what-ifs in music history.

Even though Holly would slightly revert to rockabilly immaturity on his final LP (That’ll Be the Day, featuring recordings from 1956), one can only assume that he would have continued his rapid artistic growth well into the ‘60s, probably would have released an album even better than this one (listen to “Crying, Waiting, Hoping” to get an idea). But would he ever write another song as classic or timeless as “Everyday”? One can only assume that he wouldn’t.