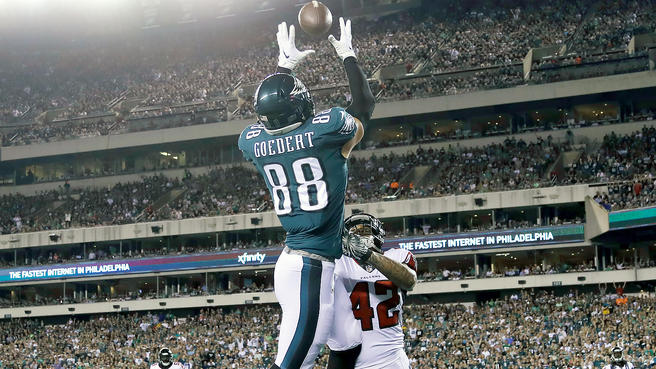 Even though the NFL regular season isn’t over, the best time to identify potential mid-to-late-round sleepers for next year is during these final weeks. The key is to look for players performing well on poor to average teams (for example: 2018 Chris Godwin), not necessarily late-season breakouts on really good teams (remember 2018 Damien Williams?). Here are two players at each position (except running back and defense, which will be addressed in a later article) to keep an eye on for 2020 fantasy mock drafts.

Who will be next year’s Lamar Jackson? The only player with any chance at matching Jackson’s historic fantasy football season would be Lamar Jackson himself. Josh Allen of the Buffalo Bills might be a close second. He averages seven rushing attempts per game and has actually scored more rushing touchdowns than the MVP. He’s also learned how to limit his mistakes. In an ideal world, Allen will at least give you 175 yards through the air, 30 on the ground and one miscellaneous touchdown per game. That’s a fantasy floor of approximately 15 PPG, assuming no turnovers.

It’s strange to call the sixth-ranked quarterback of 2019 a sleeper, but considering the fact that eight quarterbacks (Lamar Jackson, Patrick Mahomes, Deshaun Watson, Russell Wilson, Drew Brees, Dak Prescott, Kyler Murray and Matt Ryan) will likely be drafted ahead of him, you could do a whole lot worse than relying on Allen for your 2020 fantasy season.

He was laughed at when he was drafted by the Giants last spring, and his similarities to Eli Manning have provided countless memes. Nevertheless, Daniel Jones has an outside chance to break Baker Mayfield’s rookie passing touchdown record, and has also produced three games over 30 fantasy points (and one game of 28 points) in only 11 starts. Danny Dimes could be the real deal, especially with a healthy Saquon Barkley next year. Jones is definitely worth a spot on your roster, and could probably be snagged in one of the final rounds of the draft.

First of all, Adam Gase sucks. As long as he is on the sidelines, he will continually handicap the offensive players he is coaching. Just look to Davante Parker and Kenyan Drake for proof. Sam Darnold’s 2019 has been hampered by inconsistent play-calling and a bout of early-season mono, but he has finished the campaign strong. Then again, he did the same exact thing in his rookie year in 2018. With an improved O-line and possibly no Leveon Bell next season (and, hopefully, no mono), we could possibly get the version of Darnold we should have gotten in 2019.

However, I wouldn’t necessarily recommend using a draft pick on Darnold. At his best, he has the potential to be a viable, Jameis Winston-type streaming option for the duration of next year.

Three 2019 rookies stood out at the wide receiver position: A.J. Brown, Terry McLaurin and Darius Slayton. Brown is a no-brainer for 2020 already — he’s completely bypassed the “sleeper” label and jumped right into “stud” territory. Slayton is somewhat inconsistent but should be poised for another good year as the Giants’ primary deep threat. However, it is McLaurin who offers the most value as a mid-to-late round pick. Assuming the Redskins continue to roll with Dwayne Haskins, McLaurin’s chemistry with his former college quarterback should continue to produce big plays next year. He had great success with Case Keenum early in the season and has regained that production now that Haskins has become more comfortable in the pocket. Sometimes pure talent is enough to overcome a weak supporting cast.

Christian Kirk was one of my 2019 sleepers. In both of my leagues, I drafted him in the ninth and tenth round, respectively. However, rookie head coach plus rookie quarterback unfortunately equals uneven production for skill position players. I ended up dropping him halfway through the year. The Arizona Cardinals are likely to improve in 2020 (some are already claiming Kyler Murray to be next year’s Lamar Jackson), which means Kirk should finally become a reliable WR1.

The 5’11” receiver only had three touchdowns in 2019 — all coming in one monster game (31.8 fantasy points) against the Tampa Bay Buccaneers. However, he still had six games with at least six catches and seven games with at least eight targets. If Murray/Kingsbury can take that next step, Kirk could be elite in 2020. He could be next year’s Chris Godwin.

The Denver Broncos have had an extremely sporadic season. Likewise, their 2019 first-round rookie tight end has been up and down as well. However, I’d attribute most of that to coaching and poor quarterbacking. No pass-catcher in the league has endured a worse trio than Joe Flacco, Brandon Allen and Drew Lock. Nevertheless, Noah Fant is a big play waiting to happen. He’s had two games with 100+ yards and a touchdown this season, which is an exceptional number for the thinnest position in fantasy football.

I wouldn’t recommend Fant as your TE1 heading into 2020, but he is definitely worth a mid-to-late round flier. Of course, this could all be rendered meaningless if the Denver Broncos have terrible quarterbacks once again in 2020. However, his exceptional talent could make him next year’s Mark Andrews.

Not since the early-2010s New England Patriots has a team had two fantasy stars at the tight end position, but it seems like the Philadelphia Eagles are now in that category. There’s no denying that Zach Ertz is still the clear-cut number one option, but Goedert has emerged as one of Carson Wentz’s most reliable targets down the stretch. Through 15 games, he has five touchdowns and a high average-depth-of-target. Soft hands and a nose for the end zone — along with Ertz getting a year older — should make him fantasy relevant once again for 2020. Even though the Eagles will have a much healthier squad next season (with actual wide receivers!), I’d still recommend drafting Goedert. Keep an eye on how he does tomorrow as the team’s primary option with Ertz ruled out against the New York Giants.