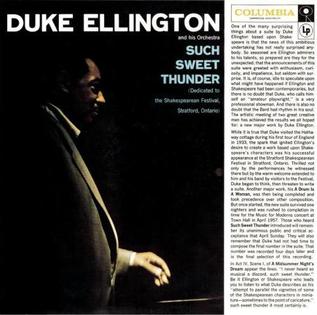 If there was any American musician worthy of crafting an instrumental ode to William Shakespeare, it could only be Duke Ellington. Such Sweet Thunder, a 12-song “suite,” finds Duke Ellington and longtime collaborator Billy Strayhorn pushing the envelope toward progressive big band, hardly a move expected of the 58-year-old bandleader.

But the unexpected defined Ellington’s career. This tightly-crafted and delicately arranged song cycle finds the Duke performing some of the most modern arrangements of his career. Quite a few of the tracks verge on third-stream classical, and you wouldn’t be at fault for mistaking it for the work of Miles Davis and Gil Evans.

You could try and point out tonal similarities between the songs and Shakespeare’s plays, but that would be beside the point. Jazz is best taken to be absolute rather than programmatic. As a result, Such Sweet Thunder is another late-period classic from one of American music’s greatest masters.