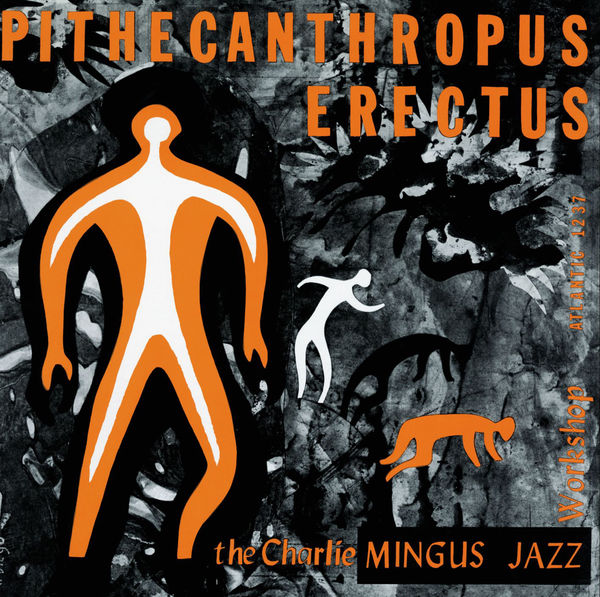 Emerging out of jazz’s primordial ooze like the Earth’s first bipedal amphibious fish-monkey, Charles Mingus’ Pithecanthropus Erectus represented a drastic shift in the way we listen to music. Never before had improvisation been so tightly arranged, or, rather, never before had tight arrangements felt so, er, improvised. The paradox of Pithecanthropus Erectus is that Mingus was already looking past bop just as it was starting to gain popularity. Quite a visionary, indeed. To wit:

Described by Mingus himself as a 10-minute tone poem depicting the early evolution of man, the imposing title track represents everything you need to know about Mingus’ musical approach. Soft-loud dynamics coincide with start-stop climaxes, and even when the bop is smooth and at ease there always lurks a sense of foreboding.

The song starts off murky and primitive. A sudden free-jazz saxophone flurry breaks the spell of Mingus’ double bass trance. Each member of the quintet works together in perfect tandem and unison, completely locked into the workings of the music. Gradually, the song evolves.

But the song ends in total chaos, with every instrument breaking down into cacophonous noise. It would appear that Mingus has charted evolution in reverse. Perhaps the shrieking climax signifies humanity crawling back into the swamp. Or is it the sound of modern man becoming too smart (or stupid) for his own good? Questions you wouldn’t think to ask of an instrumental.

“Pithecanthropus Erectus” is one of the boldest album openers in jazz history — a humble, extended introduction to the avant-garde.

The only popular standard on the album, George Gershwin’s “A Foggy Day” is played relatively close to the vest (aside from its noisy intro and droning aesthetic). The closer you listen, the more its intricacies are revealed. Mingus’ thumping bass leads the way while random percussive sound effects add to the album’s unpredictability. The final noise breakdown at the end even gives Sonic Youth a run for their money. Other than that, the song is very relaxing.

Loosely held together in a beautifully lo-fi fashion (dare I compare it to early Pavement?!), this 3-minute ballad contains the most beautiful melodies on the album. In this hidden gem, saxophonist Jackie McLean rises above the noise to deliver a passionate performance. A rare display of total emotion.

Circa 1956, the pantheon of great jazz epics was very small. Duke Ellington’s “Harlem” suite and Gershwin’s “Rhapsody in Blue” would be some of the only qualifiers. An underrated epic that comes to mind is the 10-minute “Friday the 13th” (from the Thelonious Monk and Sonny Rollins LP). Aside from being one of Thelonious Monk’s greatest achievements, it also serves as a blueprint for Mingus’ 15-minute “Love Chant.”

“Love Chant” is one of Mingus’ all-time masterpieces. A circular piano pattern guides the song through its various phases, ebbing and flowing in a steady, tension-filled stasis. Then the song picks up, turning into a swinging bop number and giving each musician the opportunity to shine. It returns to the circular piano motif and then dissipates rather than climaxes, thus ending one of the great jazz records of all time in an open-ended, ambiguous manner.