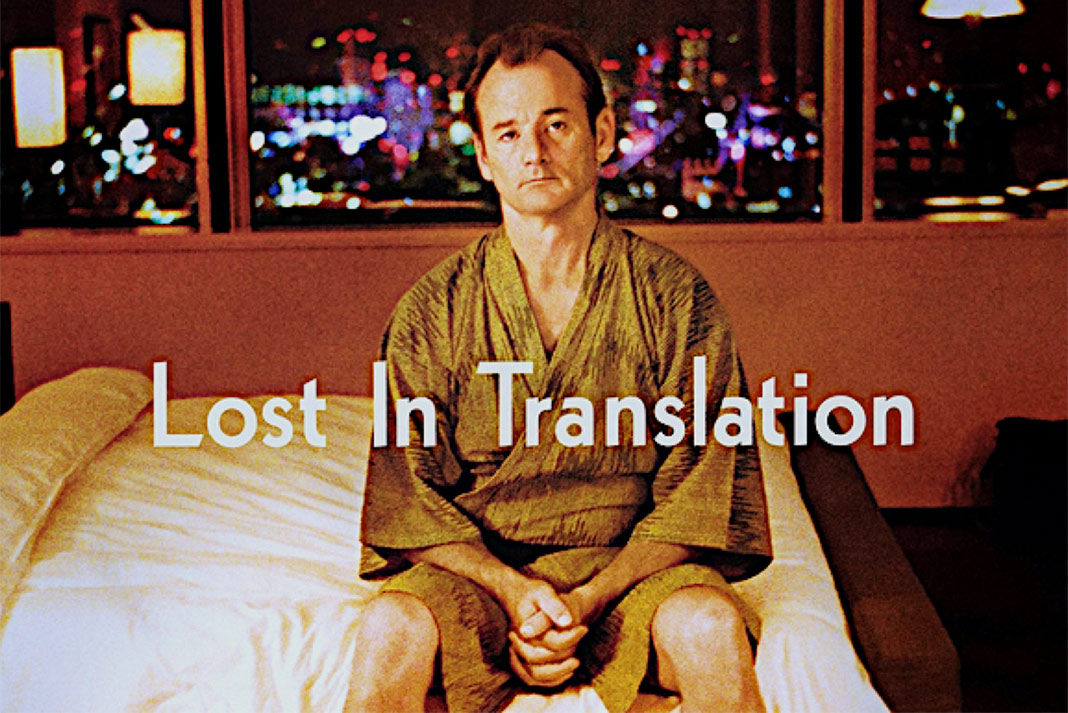 Sofia Coppola’s Lost in Translation is a great film. No need to question that. I haven’t seen a better display of onscreen empathy since E.T. So while the issue of whether Lost in Translation is an all-time masterpiece isn’t much of a debate, there are several questions regarding the film’s artistry still worth asking. And, no, “What does Bill Murray whisper into Scarlett Johansson’s ear at the end?” is not something that can be definitively answered. Here are 3 questions that aren’t so ambiguous.

How important is the film’s soundtrack?

It’s one thing for a director to showcase impeccable taste. Wes Anderson seems to flaunt it all the time in his films (The Life Aquatic’s David Bowie-only soundtrack is certainly cool, but does it add anything to the story?). And, yeah, if I was making a film, I could stuff it with all the Pitchfork-approved indie tracks I wanted, but that wouldn’t make it any more meaningful (or less terrible).

Yet Sofia Coppola’s deep cuts in Lost in Translation are a revelation. Consisting of several ambient dream-pop soundscapes courtesy of Kevin Shields, the music adds a universal language to the film’s stranger-in-a-strange-land narrative. Open-ended instrumentals like “City Girl” and “Goodbye” are tender and pastoral, exploring Charlotte’s (Johansson) own exploration of the alien Japanese culture.

But it’s the pre-existing material — not the original songs — that provide the depth necessary to advance the narrative. As Bob Harris (Murray) and Charlotte gradually get to know each other and fall in love, the romantic tunes propel their chemistry. The greatest scene is in the karaoke bar, where Bob, Charlotte and some newfound Japanese friends transcend barriers of age and culture to reach sublime understanding: a lovably sardonic cover of Elvis Costello’s “(What’s So Funny ‘Bout) Peace, Love, and Understanding,” a playful rendition of The Pretenders’ “Brass in Pocket” and an out-of-tune yet perfectly delivered version of Roxy Music’s “More Than This.”

Coppola’s film subverts Hollywood romance clichés by never settling Bob and Charlotte’s affair with cheap sex, as Hollywood films are wont to do. This scene is their consummation, simultaneously eternal and fleeting.

As the two would-be soulmates ride back to their hotel in a taxicab, the hazy guitars of My Bloody Valentine’s “Sometimes” thunder onto the scene, a timeless ballad that isn’t Loveless at all. Fitting in with the “lost in translation” theme are Shields’ murmured vocalizations. Who can truly make out what he’s saying, but who can honestly say they don’t understand what he means?

Closing the film with another noise-pop classic is another stroke of perfection from Coppola: “Just Like Honey” by The Jesus and Mary Chain has never sounded better. It takes a special film to completely change your perception of an already-great song, but who knew the uplifting and inspirational chord progression of “Just Like Honey” could leave you heartbroken?

In a film with essentially two characters, the dreamy, shoegazing soundtrack magnifies both the loneliness and togetherness that Lost in Translation signifies. The film would simply not be the same without either.

Is this Bill Murray’s finest role?

Two questions in one: is this Bill Murray’s best acting performance, or is this just the best film Bill Murray has acted in? The answers to both are probably, yes. Roger Ebert, in his 4-star 2003 review, states that “[he] has never been better.” And I would have to agree. Murray’s signature roles — Groundhog Day and, say, Ghostbusters — are touchstones to “Bill Murray the persona.” Y’know, Saturday Night Live Bill Murray, Bill Murray the celebrity golfer: art imitating life. In Lost in Translation, however, Murray digs deep:

“…there are opportunities for Murray to turn up the heat under his comic persona. He doesn’t. He always stays in character. He is always Bob Harris, who could be funny, who could be the life of the party, who could do impressions in the karaoke bar and play games with the director of the TV commercial, but doesn’t — because being funny is what he does for a living, and right now he is too tired and sad to do it for free. Except … a little. That’s where you see the fine-tuning of Murray’s performance. In a subdued, fond way, he gives us wry faint comic gestures, as if to show what he could do, if he wanted to.”

Yes, every Bill Murray fan should see this movie. But a Bill Murray fan may not enjoy this as much as they might enjoy Caddyshack. Which doesn’t mean Lost in Translation isn’t funny. Make no mistake about it, this is a comedy. Yet it is mostly a comedy of manners. Murray delivers several fine moments of humor, but he delivers even more heartache. Which easily makes this his finest role.

Does the depiction of Japanese culture hold up in 2019?

Well, well, well, here we are. In today’s PC society, an American movie set in Tokyo is automatically set up for endless scrutinizing, even if it is directed by a woman. Luckily, Lost in Translation came out in 2003 and was able to miss most of the controversy it’d surely cause today. But that hasn’t stopped some culture critics from pointing out Coppola’s apparent “racism.”

In a 2004 article for The Guardian titled “Totally Lost in Translation,” musician/writer Kiku Day opines that the film is another crass example of cultural appropriation: “Lost in Translation is being promoted as a romantic comedy, but there is only one type of humour in the film that I could see: anti-Japanese racism, which is its very spine.”

She continues: “There is no scene where the Japanese are afforded a shred of dignity. The viewer is sledgehammered into laughing at these small, yellow people and their funny ways, desperately aping the western lifestyle without knowledge of its real meaning.”

The other two prominent Americans in the film — Charlotte’s wimpy photographer husband, John (Giovanni Ribisi), and Kelly (Anna Faris), a totally self-absorbed B-movie starlet — are portrayed far more negatively than any of the background Japanese characters. And even Bob and Charlotte themselves are two spoiled soul-searchers stuck in a cycle of mid-life crises.

Lost in Translation transcends barriers — a film with characters and details this universal and empathetic should appeal to anyone. The alien Japanese culture isn’t a prop to set up the romance, as Day suggests; the film could conceivably work in any location. Strangers in a strange land needn’t be in East Asia to comprehend mono no aware.

3 Questions About “Lost in Translation”