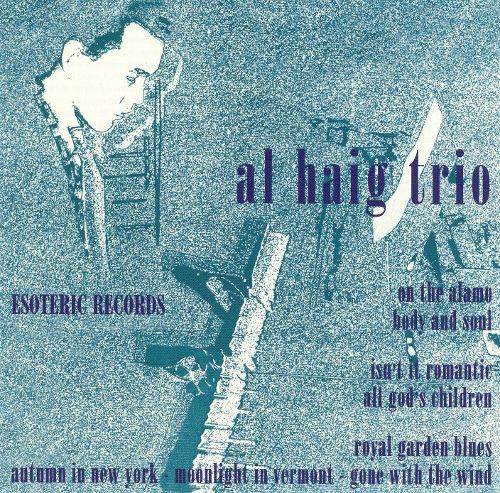 Al Haig takes on the standards with graceful aplomb, his piano runs gliding rather than striding. An early bebop pioneer, this trio session with Bill Crow on double bass and Lee Abrams on drums is undoubtedly Haig’s finest recorded set.

The first of three self-titled LPs released by Haig in 1954, this collection is often subtitled Esoteric, after the record label. Yet the word itself can also apply to the technically accomplished nature of the music, a relaxed style of bebop’s bebop that reveals its subtleties the more you listen. It has all the advancements and complexities of modern mid-‘50s bop, yet contains a patient flair that recalls the nostalgia of the previous decade.

The usual suspects steal the show: an effervescent rendition of “Moonlight in Vermont,” the serene melancholic phrasings of “Autumn in New York” and a dreamily upbeat rendition of “Body and Soul” (of which the final two minutes reach sublime levels of pianissimo).

Haig wouldn’t become recognized as a bebop pioneer until the 1970s, when a brief revival/re-evaluation led to a successful career renaissance. But for all intents and purposes, Esoteric is the last will and testament of a great New Jersey jazzman.