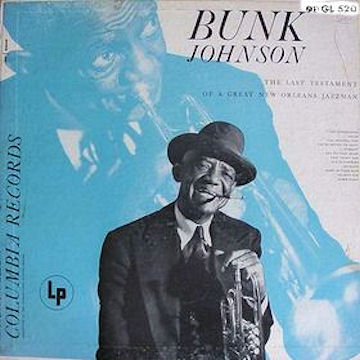 Put-it-on-a-Playlist: “The Entertainer,” “Someday (You’ll Want Me to Want You),” “Chloe (Song of the Swamp)”

Recorded at Carnegie Hall in December of 1947, this is, as the title suggests, the last testament of a great New Orleans jazzman.  The legendary Bunk Johnson would die from a stroke one year later. He was 69. This casts an overall dour mood over the proceedings, but make no mistake, this is a joyous celebration of high-stepping Dixieland.

An influence upon a young Louie Armstrong, Bunk Johnson was a key figure during the evolving jazz scene in the early 1900s. He played trumpet throughout Louisiana until he got his teeth knocked out in 1931, prompting an early retirement. A critical re-appraisal by the likes of Armstrong and Sidney Bechet helped revive Johnson’s career, and his comeback coincided with the late-’40s Dixieland Revival.

The Last Testament is beautiful jazz nostalgia, closer in resemblance to ragtime than swing. In fact, the bluesy cover of Scott Joplin’s “The Entertainer” might. Throughout the LP’s 33-minutes, Johnson remains true to his original essence — an authentic Nawlins sound circa 1908.