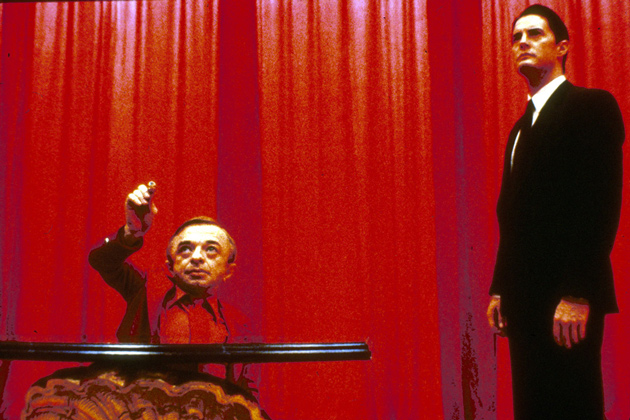 Taking a closer look at David Lynch’s supremely underrated 1992 film scene by scene. Spoilers are a given, so don’t read if you haven’t seen.  For my relatively spoiler-free of Twin Peaks: Fire Walk with Me in its entirety, click here.

David Lynch’s Twin Peaks: Fire Walk with Me relies heavily on imagery-based dream logic, with several recurring motifs helping guide us through the madness.  The credits scroll over a flickering blue ambient background, which pans out to reveal static on a TV screen.  The TV is smashed as a woman named Teresa Banks is murdered in the background.

While “electricity” is a recurring symbol, this opening shot is also symbolic of the original Twin Peaks being cancelled—a big “fuck you” to ABC from David Lynch.

The humor is so offbeat that it seems like Lynch is testing us.  Lil the Dancer is particularly hilarious for how terrible she is.  Her meaning is explained shortly afterward, but she is still probably the worst aspect of the film—maybe in Lynch’s entire oeuvre.  However, the mysterious “blue rose” that Desmond alludes to is able to raise major intrigue.

The sheriff’s office in Deer Meadow

Another scene relying on absurdity.  The laughing secretary, the offbeat dialogue—all make you unsure how to feel.  But there are some genuine laughs, like the headline “Cable Bends Steel” or the charisma of Agent Desmond.

Reminiscent of Agent Cooper and co. examining Laura Palmer’s body in the series premiere.  Establishes several motifs to be explored later—the missing ring from Banks’ finger, the letter T under the fingernail and the droning-electricity music.  A dark, effective scene.

A surreal non-sequitur with an old man and a flickering lamp precedes our heroes’ entrance to Hap’s Diner, where Teresa Banks had worked the night shift.  The whole scene glows with a stoned, up-too-late vibe.  It is 4 AM after all.  Desmond and Stanley question Irene the waitress, who has some of the worst dialogue in the movie (“Want to hear about our specials? We don’t have any.”)  Yet the scene offers up a good laugh when Stanley spills coffee on himself, and also more clues leading to nowhere with the One-Armed Man reference.

Harry Dean Stanton plays the owner of Fat Trout trailer park, where Banks had lived for a month.  The three of them examine her trailer, the missing ring motif coming up again.  Some more laughs, but some dark surrealism too.  Doesn’t make sense—the ragged old woman, Stanton’s strange reaction to her and the surging telephone poles—but it gets the job done.

So far, Angelo Badalamenti’s score has been the film’s greatest weapon, constantly in the background perfectly coloring every action onscreen.

One last confrontation with the sheriff

Agent Desmond: “Teresa Banks had a ring.  Any idea what happened to it?”

Sheriff Cable: “We got a phone here.  Got a little ring.”

Desmond goes back for the blue rose

This whole expedition with Agent Desmond has been somewhat rocky, but the fluid camera movement, the repeated motifs and Lynch’s refusal to give easy answers has steadily built this lengthy prelude into its own absorbing vision.

Desmond goes back to search the trailer park once more, examining the telephone wires and a mysterious trailer with the lights on.  He finds the ring underneath and the screen is swallowed up in black as he reaches to grab it.

Lynch has used episodic structure in his films before, such as the various digressions in Mulholland Drive (the hitman scene and Winkie’s diner).  Twin Peaks helped develop modern TV, and Lynch shows complete disregard for film convention by abruptly abandoning the Teresa Banks subplot.

But was it even worth it? What’s the point?

Well, it’s supposed to deepen Twin Peaks’ Black Lodge mythology, while also connecting to the 2017 revival series.  However, the first section of Fire Walk with Me works just fine as a unique standalone, almost its own “episode.”  It sets a strange, dark tone and is an excellent mood-piece, containing the same atmosphere as Lost Highway.

In fact, the intro in Deer Meadow works as a perfect contrast to Twin Peaks itself—absurd instead of quirky, run-down instead of picturesque, ultimately unfriendly.  It also benefits from Badalamenti’s superb score.