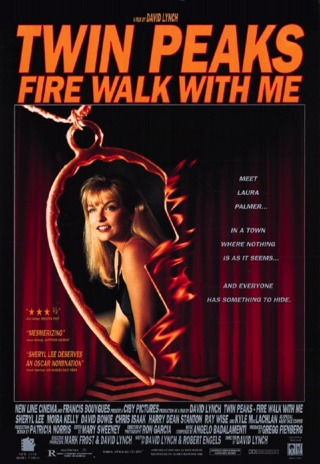 (Look for my Twin Peaks: Fire Walk with Me scene-by-scene analysis coming soon)

Possibly the weirdest film ever made…and certainly my guiltiest pleasure.

David Lynch is one of my favorite directors, and surrealism is one of my favorite strands of the arts, so I’m already a little biased here.  I love this film, but I can see where all the complaints come from.  Twin Peaks: Fire Walk with Me is by far Lynch’s most maligned work—booed upon premiere at Cannes and critically panned when it was released in theaters.

There are several reasons why FWWM had such a cold reception.  Plenty of them deal with the divide between fans of the TV show and lovers of film.  Twin Peaks: Fire Walk with Me somewhat falls into its own category, neither TV nor film.  It blends the conventions of both while throwing all conventions out the window and adhering to neither.  A riddle wrapped in a mystery wrapped in an enigma.

It’s incredibly messy.  For me, that is part of the appeal, but I understand how the film itself can seem like an affront to the viewer, simultaneously disrespecting devotees of Peaks and devotees of Lynch.  On first viewings, it might be surrealistic to the point of self-parody.  Quentin Tarantino famously stated that Lynch had disappeared so far up his own ass that he would never watch a film by him ever again.

The original Twin Peaks boasted a pantheon-level debut season—certainly one of the greatest and most influential in TV history—but viewership started to decrease during the second.  Originally, co-creators David Lynch and Mark Frost wanted the mystery of Laura Palmer’s murderer—the framing device for the entire series—to remain unsolved, but the ABC network had other plans.  Lynch and Frost were forced to prematurely end the show’s central premise, revealing Laura’s father Leland Palmer (Ray Wise) as the supernatural murderer/rapist midway through season two.

While the reveal made for season two’s best stretch of episodes (“Episode 14,” “Episode 15,” “Episode 16”), the latter half of the season lost steam and began to fizzle out under its own weight.  You might remember such plotlines as Josie Packard turning into a doorknob, Nadine Hurley going back to high school, transgender FBI Agent Denise Bryson and all the shenanigans involving Windom Earle.

Luckily, Lynch took the reins for the season finale (“Episode 29”)—which turned out to be a series finale when ABC pulled the plug—and delivered a tour-de-force of surrealism and ambiguity that left everyone’s brains scrambled for 25 years.

Fire Walk with Me was supposed to answer some of the finale’s lingering questions, but instead only caused further confusion.  It is a prequel film, focusing on the final days of Laura Palmer’s life.  We already know how Laura died and who was responsible, so what answers can the film possibly provide? Is it even worth it?

There are more questions than answers, and it is inherently different in tone than the original show.  Fire Walk with Me is dark and nightmarish where Twin Peaks was idiosyncratic and quirky.  In a sense, it is truer to David Lynch than Twin Peaks—an avant-garde film that operates under the same imagery-based dream logic as Eraserhead, Lost Highway or Mulholland Drive.

It is an almost baffling movie.  Its bifurcated structure immediately takes you off guard—we don’t even reach the town of Twin Peaks until over 30 minutes in.  FWWM’s first section—which takes place a year before the events of the show—is completely off the wall.  Absurd humor, non-sequiturs and dissonant dialogue abound.  One scene featuring David Bowie is among the strangest things I’ve ever watched (and I’ve seen Eraserhead).  Agent Dale Cooper (Kyle MacLachlan) makes a brief appearance and even David Lynch himself (as FBI Chief Gordon Cole) can’t make sense of what’s going on.

Fire Walk with Me is a film that rewards only if you are a studious fan of the original series that accepts two things: 1) Twin Peaks is one of the greatest and most influential TV shows of all time, having sparked an artistic revolution that was followed through by The Sopranos, and 2) the most intriguing aspects of Twin Peaks was always the surreal and spooky shit, namely anything involving the Black Lodge.

The mythology of the Black Lodge and its supernatural inhabitants are greatly expanded upon in Fire Walk with Me, their dark presence driving the film.  When we finally arrive in Twin Peaks, Laura’s last days are a dizzying descent into hell.  There are a few callbacks and fill-in-the-gaps moments, but the spotlight is on Laura and Killer BOB (Frank Silva)—the demonic entity that possesses her father, Leland Palmer.

Even though we know how the film is going to end—with Laura’s eventual murder at the hands of Leland/Bob—FWMM still offers a fantastic display.  Sheryl Lee fully commits to the role and brings out the immense tragedy of the character.  Lynch, meanwhile, is sloppy, but still has several moments of sheer brilliance.  Likewise, the sloppiness endears some of the more questionable aspects: the bad dialogue, the misogyny, the lo-fi effects.  Maybe they’re meant to be funny? Ironic?

Either way, if you prefer red curtains and The Man from Another Place to damn fine coffee and a slice of pie, then Fire Walk with Me is the film for you.

I am a big fan of FWWM, but still with reservations.  The aforementioned bad dialogue, misogyny and lo-fi effects.  The sloppiness.  Lil the Dancer.  Garmonbozia.  There are moments where I almost want to side with Tarantino.

But there are several more moments where my faith in Lynch is confirmed.  Laura’s trip through her bedroom painting rivals the famous Red Room sequence from “Episode 2.”  The themes of sexual abuse and adolescence add interesting shades, while the sight clues and sound cues help guide us through one of Lynch’s most complex puzzle-boxes.

And now that Twin Peaks has finally returned in 2017 for a third season, Fire Walk with Me is bound to be cast in a far more favorable light.  Like the prequel film, Twin Peaks: The Return has shown far more in common with Inland Empire than with Twin Peaks seasons one and two.  “The Return, Part 8” is basically Eraserhead 2.0, and it makes the unsettling weirdness of Fire Walk with Me fit comfortably within the Twin Peaks canon.

You either love it or hate it.  There is no other way to sum it up.  Twin Peaks: Fire Walk with Me is as divisive and jarring and strange as they come.  I love it.  You probably hate it.  Let’s see how The Return—which is shaping up to be the best of the bunch—turns out.  In Lynch, we trust.