Cliffhangers and the Mafia

Juicy spoilers ahead, so watch the fuck out.

Upon first viewing, “Full Leather Jacket” probably seems like the most memorable and meaningful episode of the season so far.  This is due to the episode’s shocking final moments and cliffhanger ending.

I analyzed the importance of Sopranos endings in my review of last episode, but I think “Full Leather Jacket” is ripe for discussion in this category as well.  The Sopranos is a show that doesn’t usually rely on cliffhangers.  That would be too conventional.

It’s not like the one featured here is a cheap cliffhanger, either.  Christopher has just been in a shootout with poo-boys Sean Gismonte and Matt Bevilacqua.  He is left fatally injured in the middle of the street, able to kill Sean with his last ounce of strength.  Matt flees and runs to Richie Aprile.  The episode closes with Chris in a hospital bed as a tearful Tony repeats “How could this happen?”  No music to accompany the end credits, just the sounds of Chris’ heavy breathing.

Upon repeat viewing, Chris’ ambiguous fate at the end of the episode loses its drama because we already know that Chris doesn’t die.  Next episode focuses on his recovery and he’ll be back to his old self by season’s end.

There are several episodes throughout The Sopranos’ run that are all-time classics because of the way they handle a dramatic character death.  Even though the deaths in “Whoever Did This” and “Long Term Parking” are shocking and climactic, their greatness stems more from their emotional resonance.

The same holds true with many of Game of Thrones’ greatest episodes.  Episodes like “Baelor” and “The Rains of Castamere” revolve around shocking main character deaths, but they do not lose any power upon repeat viewings, even though you know what’s coming.  It’s all about the execution of the, er, executions.

The only moment it is comparable to in The Sopranos’ run is the end of the season six premiere, “Join the Club,” which ends with Tony being fatally shot by Uncle Junior.  However, that episode is masterful right from the get-go, and Tony’s almost-death isn’t so much ambiguous as it is a thrilling announcement of finality.  The same just can’t be said of Chris and “Full Metal Jacket.” 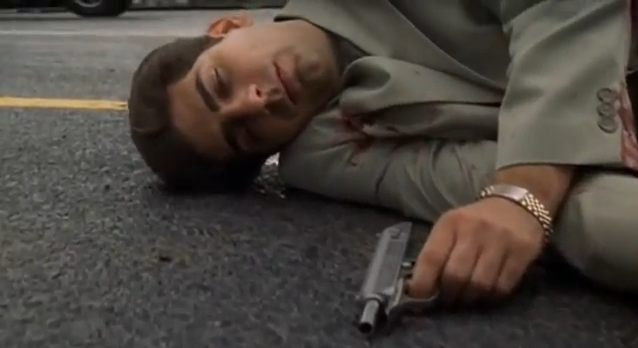 Up until its climactic final moments, “Full Leather Jacket” abounds in ultimate “nothing happens” fare.  On one side, Carmela tries to get her neighbor, Jean Cusamano, to help get Meadow a letter of recommendation to Georgetown.  Elsewhere, Richie Aprile gives Tony a prized leather jacket that Tony has no intention of wearing, while Matt Bevilacqua and Sean Gismonte confront their reality as dime-store hoods.

It’s another incredibly funny episode and so the relatively unimportant plots remain compelling throughout.  It’s not a big episode for Tony (during one therapy session he even refuses to speak), but it’s a necessary showcase for Carmela and her conflicted morals.  Her dual personas of mob wife and suburban do-gooder—and her struggles with balancing both—are far more watchable than they would appear on paper.

Likewise, Richie Aprile doing Richie Aprile shit (i.e. continuing to threaten Beansy) stays interesting because he is tremendously funny in this episode.  Chris, too, gets some hilarious lines in.  But just when it seems like he is about to turn his life around—no more drugs, no more Hollywood, proposing to Adriana, etc.—Chris is ambushed in the street by Matt and Sean. 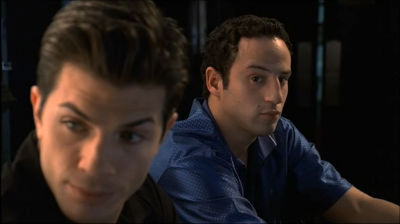 Matt and Sean were introduced as huge dummies back in the season premiere.  They have been doing various, menial odd jobs for Chris all season, but this is the first time that their characters serve a purpose.

They introduce themselves to Richie, but there is a misunderstanding during their conversation.  Similarly, while they are breaking into safes with Chris, several lines interestingly foreshadow the plot twist coming at the end.

After making their way through the episode (and season) as everyone’s doormats, Matt and Sean decide to do something big to finally make a name for themselves.  However, their plan to kill Christopher as a favor to Richie is even dumber than they are.  Yet it does make for an exciting and sudden rush of violence that stands in sharp contrast to the previous goings-on of this episode.

I don’t really have an issue with the cliffhanger ending.  Tony’s disbelief is a perfect capstone to such a sudden plot twist, and the sounds of Chris’ respirator make for a haunting soundtrack.

What takes away from the ending’s power—other than the fact that I know what comes next—is the scene that takes place between the shootout and the hospital bed.  It is short, less than a minute, but it is an entire tonal shift.  In it, Matt asks Richie for help and is immediately chased out.  It’s a hilarious scene that comes right in between two moments of tragedy, and undercuts them both as a result.

Ironically, the shocking ending undercuts how funny the rest of the episode was.  It was primed to be another Sopranos-as-comedy masterpiece.  I guess it went from “nothing happens” to “something happens” too quick.  And, at only 42 minutes, perhaps it could have benefitted from some extra padding.

But what am I saying?  This is nitpicking at its finest.  “Full Leather Jacket” is remarkably consistent and is a prime example of an episode that could have been great with a great ending.