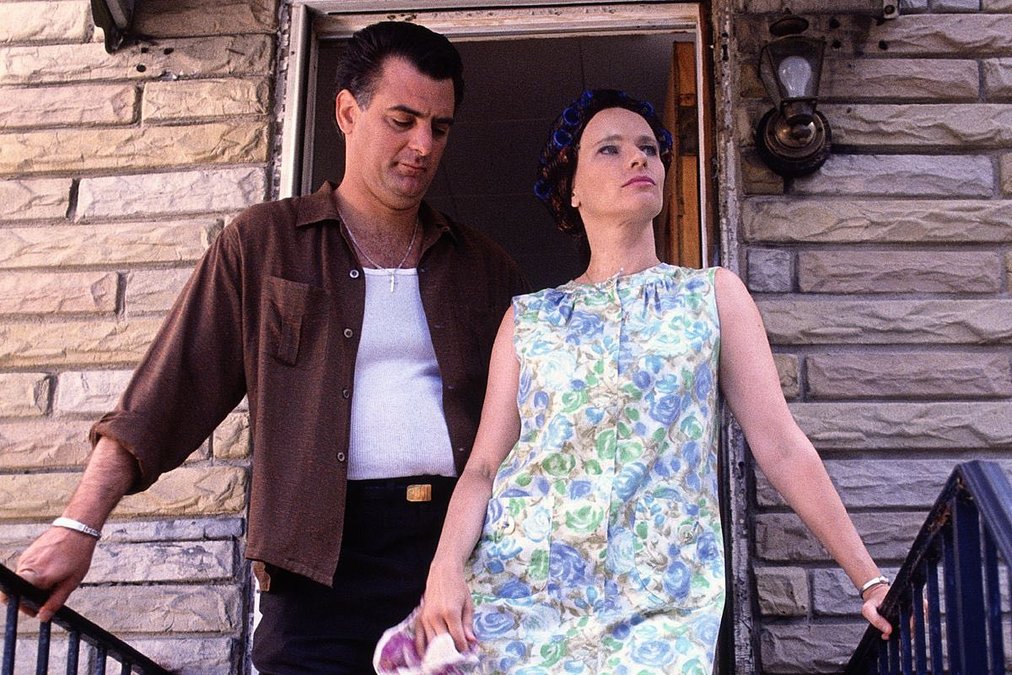 Down Neck: “Tony Flashes Back”

Episode seven of season one, “Down Neck,” is another fantastic episode of The Sopranos. You’re beginning to see a trend here, no? Once again, The Sopranos enthralls and amazes, and this time it is done by way of deep character study.

“Down Neck” is very much an episode about fathers and sons, tackling questions of what makes us who we are. At school, AJ continues to be a mischievous little rascal, stealing the church wine with his buddies before gym class. The young whippersnapper gets expelled, and the school psychiatrist proposes to Tony and Carmela that AJ may suffer from attention deficit disorder.

Tony thinks ADD is more of a psychologists’ scam than an actual disease. What he’s really concerned about is keeping his son away from a future in the family business. AJ already seems to know the truth, it appears. This prompts Tony into thinking about his own childhood, when he first found out his dad was in the mafia.

Cue Jefferson Airplane’s “White Rabbit” and a flashback to the 1960s. This is where “Down Neck” finds its magic. We get to see a far younger Tony, just about AJ’s age, and I assume the scenes take place sometime around 1967, though they have the look and feel of 1957. The flashback sequences provide David Chase and the writers the opportunity to unapologetically bask in the show’s early influences, with the look and feel of something out of Goodfellas or A Bronx Tale.

Still, the flashbacks throughout are fantastic and add a certain nostalgic richness to the episode.  For one, the mere presence of Livia and Johnny Boy Soprano in their prime is a sight to behold.  Joseph Siravo plays Johnny Boy as a classic gangster, charismatic and proud and a little stereotypical. Meanwhile, Laila Robbins does an excellent job portraying the young Livia, taking all the hysterical bitterness we see in Nancy Marchand’s performance and channeling it into a younger and ultimately more venomous version

“I could stick this fork in your eye!” she screams at a young Tony.

Tony ponders over the time he witnessed Uncle Junior and his father beat a guy up in the middle of the street, and then a later incident where he watched as Johnny Boy and several of his associates were arrested at a carnival. He reflects on his parents’ volatile relationship, thinks about AJ and talks about it all with Dr. Melfi. The ensuing discussions are the most interesting and stimulating that the therapy scenes have been so far.

The main theme of The Sopranos, or at least one of them, is that, fundamentally, people never change. Even when offered a second chance, we remain stuck in our ways. Tony and Melfi discuss fate and freewill, and it’s just so interesting to watch them dialogue back and forth — Tony adopting a cynical outlook, and Melfi remaining more open-minded. She tells him that we do have a choice, we can change what our future holds. Tony, however, voices a different opinion— “You’re born into this shit. You are what you are.”

Not many TV shows can have a serious discussion on metaphysics, and very few can make it as entertaining and funny and truthful as The Sopranos. When it comes to thought-provoking existentialism, David Chase is in a class of his own.

Elsewhere, the rest of “Down Neck” continues to be top notch. Although I’ve always felt that time spent with AJ could be better spent elsewhere, his role in this episode doesn’t feel as forced as it did in “Meadowlands.” For instance, thanks to being both expelled and grounded, AJ gets to form an unlikely onscreen chemistry with Livia (part of his punishment from Carmela is that he must pay weekly visits to his grandmother).

In Tony’s world, therapy is a sign of weakness. In fact, any type of mental illness is looked down upon. During certain episodes, series creator David Chase will sometimes take the time to tackle a relevant social issue, and in this case, the credibility of ADD is up for discussion. Tony, and thusly Chase, take the stance that the entire concept of ADD is just bullshit. Carmela ends up agreeing as well.

There’s nothing wrong with AJ. He just needs some better parenting, which is something Tony now remembers he never got. It leads into a fantastic final scene, and the only non-cliched use of “White Rabbit” in cinematic history — Tony preparing a loaded ice cream dessert for AJ and himself, a perfect closing metaphor for an episode about fathers and sons and strained relationships.

Like “46 Long” and its one-off cold open, “Down Neck” is somewhat of a Sopranos anomaly due to its extensive use of flashbacks. Yet this distinction is what makes it such a fantastic episode of television, and another highlight of this landmark debut season, showcasing just how deep and introspective The Sopranos was willing to go.

The Sopranos S1E7: “Down Neck”